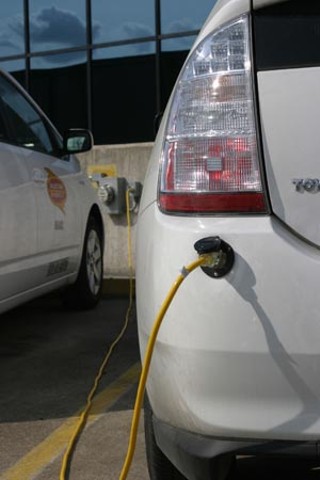 A plug-in hybrid charges up.

Big news on the plug-in hybrid electric vehicle scene this week, as the U.S. House Ways and Means Committee approved the first-ever incentive bill for plug-ins. Proposed by Austin's own Rep. Lloyd Doggett, the legislation establishes tax credits of $4,000 to $6,000 for purchasers, based on the vehicle's capacity for all-electric driving. PHEVs take the gas-electric hybrid technology a step further by adding extra batteries (such as large-format lithium-ion batteries made by Austin's Valence Technology Inc.) to boost the car's all-electric range and thus the fuel economy – with some prototypes exceeding 100 miles per gallon.

Today, PHEVs are virtually nonexistent. There are about 50 Toyota Prius PHEV conversions scattered around the country, including two undergoing testing by Austin Energy. Canada's Hymotion (which did AE's conversions) produces conversion kits and physically handles installations. It plans to offer kits for the Prius, Ford Escape SUV, and Honda Civic hybrids by early 2008, but conversions carry the daunting threat of voiding a vehicle's manufacturer warranty. Incentives for plug-in conversions are being discussed as part of pending House and Senate energy legislation. And though several automakers have expressed interest in building PHEVs, none has brought any to market or offered much certainty as to when they will. General Motors has made the boldest statements so far, pledging to offer a Saturn VUE SUV plug-in by late 2009 and, by decade's end, to build 1,000 Chevrolet Volt plug-in electric vehicles, a concept car that purportedly relies on all-electric propulsion, with a small combustion engine to charge its beefed-up batteries. But GM has always made its yet unperfected battery technology the qualifier for actually building PHEVs. Knowing that Toyota is hot on its heels, GM recently said it has put an "A-team" of its best 500 engineers on the Volt project, and once under way, they hope to build 1 million Volts within five years to bolster profitability.

Doggett's plug-in bill, the first successful attempt at such legislation after two years of attempts by different members, had 106 bipartisan co-sponsors and is expected to hit the House floor this month. "This bill takes decisive action to make the next generation of hybrid vehicles widely accessible to consumers," announced Doggett.Ê"It will help us move from the fossilized ideas of our energy past to the renewable promise of our energy future."

For the record, Dems aren't the only ones on a plug-in kick. In April, Austin-area Rep. Lamar Smith, along with fellow local GOP Rep. Michael McCaul, introduced the Plug-In Hybrid Electric Vehicle Act of 2007. The measure, which has been incorporated into the Energy for America Act (House Resolution 2483), a research and development bill pending in the House Science Committee, proposes $250 million in annual funding (from 2008 to 2012) for plug-in hybrid research and development, plus $50 million a year to carry out a pilot program to help state and local authorities acquire demonstration plug-ins. "For economic, environmental, and strategic reasons, it makes sense to encourage automakers to go beyond their already popular hybrid vehicles to produce plug-in cars," said Smith.

Ideally, PHEVs would be charged with electricity from renewable sources. Doggett, along with Austin Mayor Will Wynn and Austin Energy deputy general manager Roger Duncan, has been a key player in the national Plug-In Partners campaign, initiated in Austin in 2005 to prod automakers to build plug-ins. Plug-In Partners has accumulated more than 11,000 "soft" orders for plug-ins, and its membership includes more than 500 consumer groups, a majority of America's 50 largest cities, 164 public electric utilities, and six investor-owned utilities.

Plug-ins are expected to have up to 40 miles of all-electric driving capability – especially noteworthy since half the cars in the U.S. are driven 25 miles or less daily. Vehicle to Grid (V2G) technology, wherein excess energy stored in a PHEV's batteries can be used to power a home or be sold back to the utility when demand is high – a concept pioneered by AE's Duncan – is making plug-ins attractive to both consumers and utilities. Internet superpower Google, which now owns a fleet on PHEV conversions and recently installed a gargantuan solar system to power much of its headquarters, last week pledged more than $10 million in grants to help speed plug-in development and V2G. For more, see www.pluginpartners.com and www.calcars.org.

Biodiesel is now available in Central Austin at Juniors Beer and Wine, 705 W. 29th, just west of Guadalupe. Here, John Zamora Jr. fills up one of Juniors' King-Daddy Ice delivery trucks. Local retailer Austin Biofuels kicked off sales of B99 (99% biodiesel and 1% petroleum diesel) there last week. ABF's biodiesel is made in Texas from virgin, vegetable-based feedstocks like soybean and cottonseed oil and will run in most diesel engines. It's regarded as "CO2 neutral," as the carbon dioxide it emits was taken from the atmosphere by the plants used to produce it no more than a year ago, as opposed to petroleum, which releases CO2 absorbed by plants millions of years ago. It also produces significant reductions in the emissions of virtually all regulated pollutants. For more biodiesel info and a list of all Austin Biofuels retail locations, see www.austinbiofuels.com. 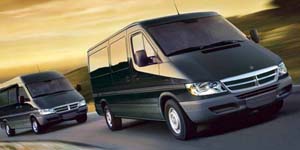