Tweet
print
write a letter
From the department of "And I Am Telling You I'm Not Going," embattled House Speaker Tom Craddick has tapped Austin criminal defense lawyer and former state Rep. Terry Keel to serve as his chief parliamentarian, a move that suggests a deepening resolve to fight further attempts at his ouster.

Keel's appointment to the $145,000-a-year job follows his commanding performance last month as stand-in parliamentarian in the session's final tumultuous days, which saw a pitched battle over the speaker's chair and the abrupt resignations of parliamentarian Denise Davis and deputy parliamentarian Chris Griesel, who called it quits after Craddick rejected their advice and refused to recognize those House members who sought a motion for the speaker to vacate the chair. Keel's interpretation of specific House rules complemented Craddick's belief that he had absolute authority to refuse to recognize House members perceived to be from enemy ranks, including some of the speaker's closest lieutenants at one time. Two Republican House leaders have since asked State Attorney General Greg Abbott for a legal opinion on the Keel-Craddick interpretation.

Keel, a former Travis Co. sheriff, served in the House for five terms before resigning last year to run for the Court of Criminal Appeals; his loss turned out to be Craddick's win. The other stand-in parliamentarian during the House rebellion, former Houston Rep. Ron Wilson, won't be taking the No. 2 spot full time; Craddick named speaker aide Kate Huddleston to become assistant parliamentarian.

Waco Democrat Jim Dunnam, chairman of the House Democratic Caucus, attacked the selection as damaging the impartiality of the office. "The parliamentarian is supposed to be someone that any member can talk to without concern about any agenda," said Dunnam, "and that doesn't apply to Terry."

Republican Keel represented Austin in the House from 1997 for five terms. In a press release, Craddick said Keel was "respected in particular for his Legal expertise and his thorough knowledge of the House rules." But Dunnam had a different take. "I wish we had someone who was more of a career public servant, someone nonpartisan," he said. "Terry was just brought in to help Craddick with his problems."

*Oops! The following correction ran in our July 13, 2007 issue: Due to an editing error, in the last paragraph of July 6 News story "Lege News: Keel named chief parliamentarian," we misidentified, by last name, Waco Democrat Jim Dunnam as Duncan. We regret the error.

Texas House: The Travis Delegation
Turning the red stain on the blueberry in Texas’ tomato soup back to its rightful hue 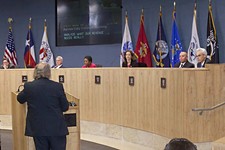 Next Week's Council: It's a Porker
Zoning, WTP4, Visa, and more