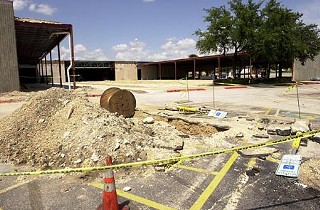 Demolition has already begun on the southeast corner of Northcross Mall (not the Wal-Mart tract). (Photo By John Anderson)

By the time you read this, the Allandale Neighborhood Association will have filed a lawsuit against the city of Austin and Lincoln Property Co., alleging that the city's site plan approval for the redevelopment of Northcross Mall is illegal. Sound familiar? While the ANA petition is independent of the lawsuit filed last week by Responsible Growth for Northcross, it's nearly identical in spirit.

"It's a very ripe situation for getting a judge to interpret city ordinances and to determine whether interpretations by city staff were correct," said Bruce Bigelow, attorney for the neighborhood association, which includes the Northcross site. ANA alleges that city staff got it wrong. At issue is whether the project qualified for the easier administrative approval process it received – which involves only staff reviews, with no input allowed by council or the public. ANA contends that a garden center within the planned Wal-Mart should have triggered a conditional-use-permit process – which requires Planning Commission review and a public hearing, and allows appeal to City Council for a final decision. That last point is the key. Under the administrative approval process used, council believes it has no authority to act. "Getting clarity on this will be very helpful," said Council Member Brewster McCracken. "For us to know, one way or the other – from a judge – whether we do or do not have the authority to act."

City staff, including the legal department, have asserted that because the city has administratively approved projects with garden centers in the past, it would have been prejudicial to enforce a CUP process at Northcross. "A series of wrong interpretations doesn't justify another error," responded Bigelow. "We have an interest in getting a ruling by a judge." He said that could take three months.

Meanwhile, RG4N's lawsuit against the city and Lincoln is moving ahead. The petition similarly alleges that the city illegally failed to follow its own ordinances and procedures, including a CUP process and providing full notice to neighbors. Huddling on Thursday will be attorneys Brad Rockwell for RG4N, Richard Suttle for Lincoln, and Casey Dobson as outside counsel for the city.

RG4N's "interested party" petition seeks a temporary restraining order and injunction to halt Lincoln's current demolition and construction work. One immediate threat is to 29 mature trees on the site; the petition alleges that the city failed to enforce its tree-preservation ordinance. Pollution of Shoal Creek during construction is also cited as a pressing issue: RG4N alleges that the city prejudicially failed to enforce a plat note requiring a higher redevelopment standard for controlling rainwater runoff. The city has chosen not to enforce the stronger water-quality and flood-control provisions on the site, according to RG4N.

For the immediate term, Lincoln Property has agreed to halt construction; RG4N won't go to court and seek the restraining order from a judge unless Lincoln decides to proceed. "We're hoping for a longer-term agreement, but you just never know," said Rockwell.

RG4N's lawsuit alleges that throughout the approval process, step by step, the city has prejudicially favored the developer's interests, at the expense of the public. For more background information, see "RG4N to Sue City Today" at the Chronic blog at austinchronicle.com/chronic, or read the lawsuit at www.rg4n.org.

Assistant City Manager Laura Huffman noted last week that Wal-Mart and Lincoln's promised voluntary upgrades to the project, brokered by city staff, still are not in the site plan that was approved. "We're still waiting for their changes to be submitted, in the form of a site plan amendment that will confirm what they presented," said Huffman. Wal-Mart spokeswoman Lisa Elledge stated, "At this time, we're still committed to making the voluntary changes. We're still moving forward on that."

If either RG4N or ANA prevails with a judge, Lincoln would have to start the process again and file a new site plan. That plan would be subject to two city ordinances that have since gone into effect. The city's Design Standards and Mixed Use Ordinance would require a higher-quality project design. The Big Box Ordinance would require a CUP process with a public hearing and no doubt a culminating council vote.

If that public process ever comes, count on a real doozy.

Mart Growth
Will the city stand up for its neighborhoods and urban vision?