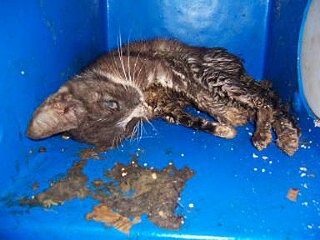 The cat in the blue box is one of several photos showing reported neglect at the Williamson Co. animal shelter. Upon arrival at a shelter, a feral-cat trap is routinely placed next to such a blue box. The cat seeks refuge in the blue box, which is then placed in a larger cage; a door allows the cat to venture into its cage to eat, drink, and use the litter box. “We believe the doors were shut,” witnesses said, possibly from the time the cat came to the shelter on June 16, until the discovery of its body three days later. Volunteer Ruthann Panipinto said she saw signs of decomposition – “body fluid spread across the floor of the box, the head at an odd angle, eyes wide open, hunks of fur sticking to remaining flesh.” (Photo By Lori Rogowski)

Allegations of neglect and cruelty are flying across Williamson County in continuing controversy over the sparkling new $3.9 million Regional Animal Shelter, open only three months but reportedly over capacity from its first day. A series of photos taken June 19 by Lori Rogowski, a volunteer who has since been banned from the shelter, shows a dead, contorted kitten in a tiny blue box beside a pile of excrement; a black cat crouched behind a disintegrating litter pad; a tiny kitten stretched in funereal pose in the palm of someone's hand; and shit-caked cages with dirty, empty dishes. These images – combined with accumulating reports by both shelter staff and volunteers that a lack of staff, medicine, and euthanasia fluid, compounded by a laxity in feeding, watering, and medical treatment, could be causing an animal death a day – prompted a heated exchange at the June 26 meeting of the Williamson County Commissioners Court. Animal activists from across the state expressed outrage over reported conditions at the shelter. Most recently, the Williamson Co. Sheriff's Office began an investigation.

Commissioners vociferously defended the shelter, but they also complained of recent staff resignations and found it necessary to approve a 68% increase in the operating budget, from $411,260 to $692,209, as of Tuesday's court action. "I did see some problems at the shelter," said Precinct 1 Commissioner Lisa Birkman – citing only a broken door on an expensive clothes dryer. Precinct 3 Commissioner Valerie Covey, who also serves on the shelter board, said the shelter has plenty of donated food and pleaded with the public to stop donations, though the revised budget still has no line item for food. The court did authorize the immediate hiring of an administrative specialist and animal-care attendant, while cutting the shelter manager position. But Rogowski called that "just a Band-Aid." Moreover, the new budget will not go in to effect until approved by Round Rock, Cedar Park, Leander, and Hutto, which fund 50% of the shelter costs.

The late, lamented cat in the blue box (see photo) figured in public testimony. Activists challenged a televised quote from veterinarian Dana Boehm, interim director, that the cat had died of "natural causes." But, Covey said, "the reality is we receive sick animals that people have not taken care of. We don't have the luxury to say no." (Veterinarian Beverlee Nix of the Department of State Health Services Region 7 office reviewed Rogowski's photos and told the Chronicle that reports of neglect are "old news" and that "the truth was somewhere in between or lost in the sensationalism of the events.")

A day before the commissioners' meeting, Rogowski and another volunteer, Ruthann Panipinto, filed a police report concerning shelter conditions. Capt. Mike Schnautz of the Precinct 1 constable's office determined the allegations warranted further investigation, and the County Attorney's Office assigned it to the sheriff. Cathy Lopez, a veterinary technician at the shelter, said detectives told her late last week they are taking concerns about cruelty and neglect "very seriously." She said investigators are considering, among other matters, why Boehm, appointed interim director after the June 1 departure of former director Melanie Sobel, could not use her own Drug Enforcement Administration license to procure the euthanasia drugs needed for the shelter. Lopez said the shelter had to scrounge the drugs from other sources while the county awaited its own DEA license, which arrived late last week. "Dana brought her own bottle," Lopez said. This BYOB strategy contributed to the recent outbreak of disease at the shelter, believes Lopez, who said needed medicines remained "on order" for almost three weeks in June. Gretchen Guyer, director of the Williamson County Humane Society, confirmed that a dog the society accepted from the shelter had tested positive for parvo, a very painful and bloody intestinal disease spread by contact with feces. "Poop in the cages is my pet peeve," said Guyer in reaction to the situation. Lopez said some dogs may have untreated distemper and that extremely aggressive dogs are a concern. (Rabies can only be confirmed by examining an animal's brain – by killing it, in other words.)

On June 28, Sobel released a lengthy statement defending her tenure, saying she had warned commissioners from the beginning that they had not budgeted enough for administration and upkeep of the expensive shelter and that she resigned when she realized they did not intend to increase the funding. (For the full statement, see the sidebar "Melanie Sobel's Letter" below.) No animals died in custody on her watch, Sobel told the Chronicle.

Former Commissioner Greg Boatright told the Austin American-Statesman, "I think the mistake that we made was that she was not aware of municipal government." Sobel responded that she had previously worked for animal control in Chicago.

Perhaps Sobel's actual difficulty was that she didn't understand how county government is often practiced in Williamson County. Boehm, Sobel's replacement, is also the niece of former Commissioner Frankie Limmer; Boatright's daughter Trista reportedly worked at the shelter for two weeks at the front desk; and the shelter just hired Jack Shannon Newsom, corrections officer and brother of Sheriff's Office Capt. Shawn Newsom. Sobel said Boatright previously invited her to lunch – to meet a woman he suggested she hire as shelter manager. Had she done so, perhaps both she and the animals would have fared better. Repeated attempts to contact Boatright to respond to Sobel's charge were unsuccessful.

The conditions at the shelter have taken their toll on volunteers and staff. Lopez says the sound of a cat in the throes of impending death is distinctive, "a sickening meow, like a moaning." During the lapse in euthanasia for lack of chemical agents, she remembers caring for one kitten in particular. "I just held it, wrapped it in a warm blanket, and put it back to bed." When she returned, the kitten was dead. "No person, and no animal, should have to die alone."