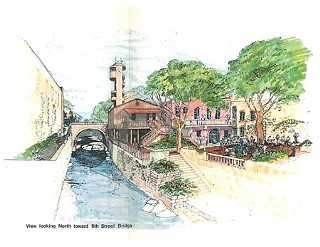 If it seems as though it took an eternity for the Waller Creek tunnel project to get going, it's been nearly that long – this rendering dates back to the plan's inception back in the 1970s.
Image courtesy of The City of Austin

City Council approved the financial instrument to fund the Waller Creek tunnel project last week with such a lack of fanfare that one might assume that getting the touted future Riverwalk off the ground had been no problem at all.

So let's review the recent history: Voters approved $25 million in bonds back in 1998. The money wasn't enough. The economy tanked. The city drafted three new versions of the project, all with price tags well beyond city means. Downtown revived. The city turned to the county to issue bonds. Commissioners, especially outgoing Commissioner Karen Sonleitner, rejected it. The city had another bond issue. The tunnel project was kicked out. Development Downtown continued. Commissioners changed. The city crafted a more appealing tax-increment finance zone. Finally, both the city and county were on board. It's a little like Kabuki theatre.

The Waller Creek Citizen Advisory Committee – a cross section of stakeholders – met this month for its first briefing on the project, which has been in the works since the early 1970s. This – not the city or county – will be the group charged with approving the final financing plan for the $123 million project. Chief Financial Officer John Stephens presented an overview of the tax-increment finance district, which will use all of the city's and half the county's incremental property-tax dollars to pay for the tunnel. Jim Robertson of Neighborhood Planning and Zoning reviewed the tunnel's history.

Stephens estimated the design of the project – a tunnel under Waller Creek to divert flood waters to Town Lake – would begin in September and take two years. The construction contract would be awarded in either late summer or early fall 2010. The tunnel will be operational in 2016.

If you're waiting on property values to rise along the bank to support this new Riverwalk-like venture, that's a whole lot of waiting. To stem the financial tide of project costs, the city will delay issuing bonds as long as possible and has pledged money it saved when Hilton's Convention Center hotel was refinanced early this year. That cash flow will produce an additional $10 million the first five years.

"This is an additional source of revenue that strengthens our financial plan," Stephens told the group. "It will be used, first, to cover the debt service in the early to midyears of the TIF [district]. Second, it will provide a margin of safety to fund any project cost increases."

"Was the city anticipating project cost increases?" asked the group, remembering that the initial tab on this project was $25 million.

"None that we can foresee, but it's a long and complex project," Stephens said. "Once we've addressed both those issues, this can also be used for amenities."

Amenities are likely to be a big topic. The more bells and whistles the city can put on this project, the more it's going to look like a Riverwalk. Board members are already eyeing the city's parkland dedication fees. Those fees must be used in a small locus around the project that paid the fees. That means Downtown development could be a real boost to building some renewed interest in Waller Creek, such as repairing the broken bike paths along the creek.

Robertson said an initial charrette had emphasized street connections and varied treatments for different "zones" along the creek. Those plans actually look a lot like today's vision for the creek, except that Waller Creek would exist in a Downtown that includes multiple high-rises and towers, which no one envisioned in 1998.

This Waller Creek plan will be folded into the ongoing Downtown plan. That includes entitlements on the bank-side land, as well as unifying design elements for the area, Robertson said. The tunnel will bring about a million square feet of land out of the floodplain.

Already, committee members are talking about beautifying the area to reacquaint locals with a long-neglected and often unsightly creek. That's going to be tricky, as members want to make sure they don't spend money on an improvement that will ultimately be swallowed up by the impending construction project.