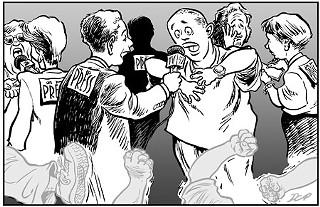 As has now been reported internationally – in an unusually wide broadcasting of an otherwise fairly ordinary, local crime story – on Tuesday, June 19, 40-year-old David Morales was beaten to death by three or four men in the parking lot of the Booker T. Washington apartments in East Austin, just after he got home from work. Morales, a painter, had caught a ride home with a co-worker; as Morales' friend backed his Ford Taurus out of the housing-complex parking lot, he accidentally hit 2-year-old Michael Hosea Jr., who lives in the complex. (As a precaution, Hosea's parents took him to Brackenridge Hospital; the toddler is fine.) Almost immediately, however, three or four men approached the Taurus and began beating the driver through his car window. Morales was already walking toward his sister's apartment when the accident happened, but when the men confronted his friend, Morales turned around and walked back to the car. He was trying to intervene and stop the situation from escalating, said Assistant City Manager Michael McDonald. It didn't work, and the attackers turned on Morales. They beat him and knocked him to the ground, where at least one man continued the beating. The men fled before police arrived. Paramedics transported Morales to Brackenridge, where he was pronounced dead.

Those are the basic facts. It was a tragic, unexpected, and startlingly senseless crime. At press time police were still searching for the men responsible for Morales' murder and, along with Morales' family and friends, for a reason the men exploded with deadly violence.

Also remarkably senseless was the initial media response to the incident.

By June 21, Morales' murder had become headline news, not only in Austin but across the nation, even reaching to Canada and England. But the reporting was almost universally sloppy, producing stories rife with sensational accusations based on unfounded assumptions. CNN reported that Morales was the victim of "mob violence" – a description carried in various forms by the Associated Press, local Austin TV stations, and numerous bloggers (several reported that Morales had been "lynched"); The Washington Post's summary at first indicated that as many as 20 men pummeled Morales.

Fox News' Bill O'Reilly told his viewers that Morales was "beaten to death by 20 African-Americans … on the grounds of the [city's] Juneteenth celebration," and the Houston Chronicle reported that the beating was administered by a "crowd of Juneteenth partygoers turned violent." None of these reports was accurate, and several, including the Houston Chronicle's (repeated in the San Antonio Express-News), were simply false.

June 19 was indeed Juneteenth, the holiday celebrating the day in 1865 that Texas slaves learned they had been emancipated. It is also true that hundreds of people had gathered in nearby Rosewood Park that day to celebrate the holiday and that, as a result, the streets around the Booker T. apartments were congested with vehicle and foot traffic. But there was never any indication that Morales' death was connected to the Juneteeth festivities – that the beating was a racially motivated attack perpetrated by a horde of Juneteeth "partygoers," as the Houston daily reported. (As was reported several days later, Juneteenth-related traffic congestion in the neighborhood was part of the reason it took EMS responders 13 minutes to arrive at the scene, but that is the extent to which the festivities played any role in the event.)

The reason that so many reporters got the story so wrong isn't clear, but a scapegoat was quickly identified and blamed for the poor reportage: the Austin Police Department. At issue is a single line in the middle of an otherwise unremarkable initial press release about Morales' death that the APD's Public Information Office sent out on June 20. In recounting the basics of the incident (gleaned from initial police reports, which are inevitably incomplete), the release included this line: "It is believed there were 2,000 to 3,000 people who were in the area when the driver and Morales were attacked." That's it. It was a non sequitur, which explains why it stood out, but it does not explain why so many reporters overinterpreted its vague meaning ("in the area") to conclude not only that Morales was beaten by an angry mob amid a throng of onlookers but also that the mob and onlookers were connected to Juneteenth celebrations.

Even the Statesman, which had admirably avoided most of the initial reporting exaggerations, published an editorial on June 22 blaming that single line of text for the media errors: "The initial police news release on the incident made a reference to a crowd of 2,000 to 3,000 people in the area – leaving the distinct impression that a mob of black people from a Juneteenth festival had set upon an innocent Hispanic man and killed him." Well, no, and especially not "distinct" – one phone call from the reporters would have ascertained that the festival crowd was several blocks away and that onlookers only gathered after the police and EMS arrived.

On June 21, city officials – including McDonald, City Manager Toby Futrell, acting APD Chief Cathy Ellison, and Assistant Chief David Carter – held a press conference to try to repair the damage. Officials said they regretted the confusion caused by the APD press release and again laid out the facts surrounding Morales' death: There were not dozens of attackers or onlookers, and there was no connection to Juneteeth, Futrell said. (Nonetheless, several reporters sounded more interested in probing that false connection, as if more interested in bolstering a sensational story than in correcting initial reporting errors.)

Perhaps the APD should not have included the line at all, or maybe they simply should have explained that the neighborhood was crowded and the congestion made it difficult for emergency responders to get to the scene. Nonetheless, the poor reporting and consequent misleading headlines could easily have been avoided simply by calling the Police Department's Public Information officer. Apparently, none of the offending reporters did that. "Some people made some assumptions," none of which were "based on anything" the city or APD did or said, McDonald told me Friday.

Right now, police are focusing on identifying and apprehending Morales' killers: "They put everyone at risk, and we need to catch them," McDonald said. Police are asking anyone who may have witnessed the beating or may have information about Morales' assailants to call the homicide tip line at 477-3588 or Capital Area Crime Stoppers at 472-8477.