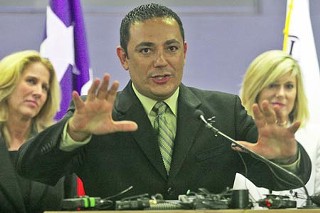 The Art Acevedo lovefest officially kicked off Thursday when City Manager Toby Futrell (left) announced that the California Highway Patrol commander was her choice to lead the Austin Police Department. (Acevedo's wife, Tanya, is on the right.) Acevedo gushed over Futrell; Futrell, council members, and civil liberties/civil rights advocates all gushed over Acevedo; and everyone was deliriously nice to one another. Can it last? (Photo By Jana Birchum)

Cue the music: This is the dawning of the age of Chief Art Acevedo.

Just more than a year after Austin Police Chief Stan Knee retired his position (to take a job as a security consultant in Afghanistan – yes, still sounds weird), not to mention months of developing a nationwide search for a new chief, followed by more months of actual searching, interviewing, and hand-wringing – topped with speculation and aggravation about whether the process was actually good enough or whether the public was sufficiently included in the process – City Manager Toby Futrell officially announced on June 14 that she had chosen Acevedo, a division chief with the California Highway Patrol, to be Austin's next top cop.

"Art Acevedo is the right choice at the right time for the Austin Police Department and for our community," said Futrell in a prepared statement. "During all his visits with the members of our community, he has shown an ability to lead. Just as important, I have seen a quality to connect with people, immediately gaining their trust and respect. Acevedo is simply a good fit for Austin."

Acevedo is young (42), enthusiastic, and eager. He is affable and gregarious, as well as bilingual (the only fluent Spanish-speaker among the five finalists for the job). He's also smart, standing out among the finalists by doing his homework – he's obviously researched the city and its politics (and actually seems to understand both – no small feat) – and by being the only candidate to actively reach out to community members outside of the "official" city-arranged stakeholder meetings and the final meet-and-greet public forums held early last week. During the spring, he sat down with members of the Austin Police Association and with community activists from the American Civil Liberties Union and League of United Latin American Citizens, among others. It wouldn't be a stretch to say he managed to dazzle them all. Debbie Russell, with the Austin ACLU, was impressed by Acevedo's straightforward style and his promise to be a visible and vocal chief. APA President Jim Beck says he was similarly impressed. "He'd already hit the ground running, and he hadn't even gotten the job," Beck says.

Imagine: APD rank-and-file and many of the department's most vocal critics have found something about which they actually agree. In Acevedo, people have found common ground. In the days leading up to Futrell's announcement, my phone line was tangled with calls, and my e-mail inbox was jammed with increasingly giddy speculation that Acevedo would be Futrell's choice. Seriously: giddy. Imagine a cop's cop as giddy as a kid on the last day of school or a normally earnest activist seeing only roses and rainbows. And on Thursday, about 100 people – city officials, community members, and cops among them – gathered at City Hall to hear Futrell's announcement. They applauded; they actually gave Acevedo a standing ovation. Score one for keeping Austin weird.

Jim Harrington, director of the Texas Civil Rights Project, summed up the collective vibe: "Today, the sun has shined on the city of Austin, with the hopeful promise of a new era for relations between the police and the city's minority communities," he said in a prepared statement. "The selection of Chief Acevedo honors the many good officers in the police force and honors Austin's diversity and Austin's efforts to respect the human rights of all its people."Ê

Acevedo is similarly excited that he has been tapped for the job. "I felt that I was a good fit for the city, and I knew how badly I wanted the job," he told me earlier this week. "I really feel like I can make a difference."

Acevedo is slated to take over as chief on July 19, and he's ready. (Officially, City Council must vote to confirm his appointment before he can be named chief. Members are scheduled to take up the matter today, and given the current lovefest, it's all but a done deal.) Up first, he says, "obviously," will be an overall assessment of the department – made up of nearly 2,000 employees (including about 1,400 sworn officers) with an annual operating budget of more than $183 million – to enumerate its strengths, weaknesses, and needs.

"At the same time, I really have to continue to reach out to the community," he says – and he's determined to reach the "silent majority," people who are not used to speaking out. "I really want to understand this town," he says. "I want to meet everybody."

Acevedo is clearly energized by the overwhelming support he has received but knows that he'll have to work hard to keep it: "It's a honeymoon," he says. "Everyone extends courtesy until the first controversy comes along." Still, he says, he intends to maintain community trust. "Whether we agree or disagree, we will be engaged [in an] open and transparent [dialogue] – and that's half the battle."