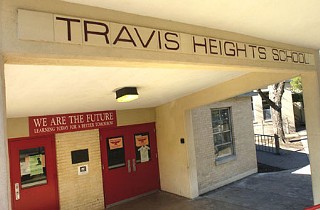 Travis Heights Elementary student Matthew Berron would often hang out in his father's office after school. Much to his surprise, Matthew came into the office one afternoon in April to find his father's things packed in cardboard boxes. Matthew was unaware that for the past few months his father, former Travis Heights Elementary head custodian Frank Berron, had been fighting to save his job and finally lost. This wasn't the way Frank wanted him to find out.

Berron's story is one that "can only be described as Kafkaesque," in the words of Education Austin President Louis Malfaro. In the span of a few months, Berron was placed on administrative leave, fired, restored, placed on leave again, and finally terminated.

Education Austin says Berron was wrongfully fired on trumped-up charges of sexual harassment, based mostly on an "innocuous" parent complaint that the union says was blown out of proportion. It all started with a father's e-mail in February, complaining that Berron had been talking to his daughter and asking questions about the girl's mother, who would usually eat with her every week. The issue had been upsetting to the girl because her mother had been missing her lunch period lately. The e-mail stated, "He again asked when [the girl's] mother would be returning to visit for lunch, and [her] response unfortunately and truthfully was, 'I don't know,' whereas [her] mother has never been dependable nor a mainstay in [her] life. … [I]t is troubling because it is yet another reminder [of] how disappointing [her] mother is to keep missing Friday lunches. I believe this is what mostly bothers [her] about being asked frequently."

It was based on this complaint, along with two complaints from Berron's co-workers and another from a teacher, that the district – acting on the recommendation of Travis Heights principal Lisa Robertson – decided to fire Berron. Union representative Bruce Banner, however, calls the case a "campaign of lies, insinuation, innuendo, and gossip." He claims Robertson actively solicited complaints from teachers and Berron's co-workers in an effort to bring about his dismissal.

Robertson contends Berron made several unprofessional comments about students' mothers and asked students inappropriate questions, but Banner points to contradictions in Robertson's claims and those of fellow custodian Elie Cruz. In Robertson's original report to the district, she claims a student told her in an interview that Berron had asked her, "Did your mom get me anything for Valentine's Day?" Documentation provided by the district shows the claim was made by cafeteria manager Mary Jane Kistler, however, not a student; no documentation of the alleged interviews exists. Kistler's comments also seem to portray Berron as sex-crazed. According to her statement, "He would state, 'Oh look at that woman. She looks hot today. I would like some of that.'"

Statements from other Travis Heights faculty tell a different story, however. Teacher Jane Isoline-Webb, who has known Berron for seven years, said, "The statements made about [Frank] are ridiculous and totally untrue. If you talk to 99 percent of the children at Travis Heights, they love 'Mr. Frank' and want to know what happened to him, my own daughter included."

Based on a written statement from Cruz, Robertson is also saying she recommended Berron's termination partially because of his job performance lately and his alleged mistreatment of his co-workers. According to Cruz's statement, two former custodians warned her that Berron was lazy and would pass his work off to her. However, Banner solicited written statements from the two custodians in question, which refute Cruz's statement as an outright lie. In fact, Govalle Elementary head custodian J.R. Rodriguez twice offered to let Cruz work with him, and she declined, saying she liked working with Berron. Cruz was later given Berron's job after he was fired. Malfaro says this is suspiciously ironic: "How much stock can you put into the veracity of her claims when she has something to gain?"

As evidence of Berron's supposed poor work, Robertson provided teachers' evaluations, which could be described best as mixed – ranging from unsatisfactory to excellent. Austin Independent School District Housekeeping Services gave Berron's crew a 90% rating, but Robertson contends he can't take credit for that.

Associate AISD Superintendent Yolanda Rocha ruled in Berron's favor on March 27, agreeing to take him off leave, transfer him, and provide training. Rocha also pledged to Banner that she would deal with Robertson's conduct. In a strange twist of fate, however, Rocha fell seriously ill and another district employee acting in her stead upheld Berron's termination.

Banner says this is just one example of a growing divide between two classes of employees: at-will and just-cause employees. "At-will" or "classified" employees – such as janitors, maintenance personnel, and cafeteria workers – have very little recourse in the event they are fired, and the burden of proof is entirely on the employee. "Just-cause" employees, such as teachers and administrators, on the other hand, have more legal rights, and the district must show just cause to fire them. Classified employees lack this legal protection, Banner said.

Nowhere is this distinction more clear, Banner says, than in the contrast between Berron's case and how the district handled a principal who was recorded making harassing phone calls to another teacher, with whom she was having an affair. Even after the incident was reported to the district, Banner says, the principal didn't receive so much as a slap on the wrist.

Berron is out of work and has been denied unemployment, pending an upcoming hearing. He has been searching unsuccessfully for a new job since he was fired in late April. Berron urged parents and teachers at Travis Heights to speak out on his behalf. "I really want the people of Travis Heights to get the knowledge of what's going on and to let them know that I've been mistreated and mishandled," he said.