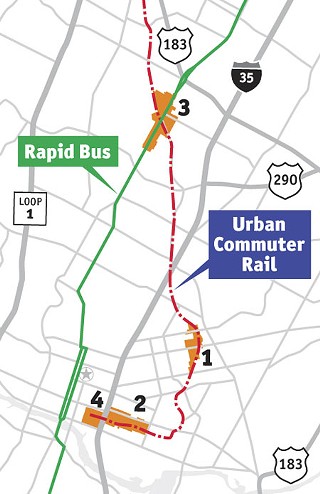 PB PlaceMaking will hold station-area planning workshops June 26-28, to present their plans and collect community feedback. During facilitated table discussions, participants will respond to a "blended plan" that strives to distill all of the best ideas generated to date.

Presentations start at 6pm; those new to the process or wanting more time to view drawings should arrive at 5:30pm. A light meal will be provided. For more info, visit www.ci.austin.tx.us/planning/tod or contact Sonya López, the city's lead TOD planner, at 974-7694.

4) The Downtown TOD will be studied later this year, as part of the Downtown Plan.
More Developing Stories columns