All aboard for transit-oriented development 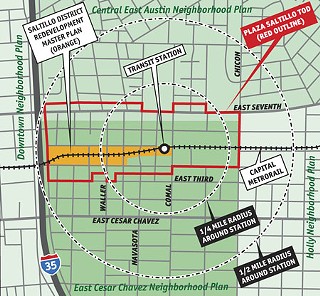 Plaza Saltillo TOD
Walk to Rail: Each neighborhood center TOD district (area inside red line on map) corresponds to the commercial center of the neighborhood. The quarter-mile radius represents about a five-minute walk to the station; from there, residents can commute to work Downtown. TOD planning must reflect other adopted plans near the district, as shown for the Plaza Saltillo area.
Source: City of Austin/PB

The train is a'coming – Capital MetroRail, to be precise – and with it the community's ticket to help shape the redevelopment of the neighborhoods that will play host to the MetroRail stations. Make no mistake: Redevelop and densify they will. The city of Austin is following international best practices for planned transit-oriented development around urban transit stations. Council policy – codified in an interim TOD ordinance adopted in May 2005 – follows nationally recognized principles: Support public transit, promote compact density and "growth nodes" around transit stations, require good urban and architectural design, and produce people-friendly, walkable streetscapes. Next week, on Tuesday, Wednesday, and Thursday evenings, June 26-28, the public is invited to begin putting those principles into practice at three hands-on workshops for station-area planning.

The city's planning has been proceeding for years on a parallel track with Cap Metro's preparations for its 32-mile commuter rail line, scheduled to begin passenger service in fall 2008. With the initial Phase I master planning completed, the city and its TOD consultant – Portland, Ore.-based PB PlaceMaking – are now engaged in planning for the first three TOD districts, all in established neighborhoods. The TOD districts will expand the neighborhoods' existing commercial centers; they are further divided into gateway, midway, and transition zones, which provide for gradual step-downs of height and density. Two are in East Austin – at Plaza Saltillo (Comal & Fifth) and on East MLK (just west of Airport Boulevard). The third is northwest, on North Lamar (at Justin Lane). Toward the end of this year, station-area planning also will occur for the line's Downtown terminal stop (at Brush Square, near the Convention Center) as part of the Downtown Plan.

The station-area planning process provides for community input through design workshops. For each area, SAP Workshop II is being conducted by PB next week (see "Upcoming TOD Workshops," p.29). Stakeholders encouraged to participate include property owners, renters, and home owners, as well as surrounding businesses and interested developers.

"Our plans are all about what the community says – they're the experts," said G.B. Errington, PB's principal lead. PB has experience with TOD projects in more than 20 states; they're currently working in Denver, Miami, and Washington, D.C. Notes Errington: "Listening to the community is a core value of our work. And since the community never speaks with one voice, it takes a balancing of all those different concerns."

The early-stage concepts to be presented next week will build on the community preferences already expressed in adopted neighborhood plans (which exist for all affected areas). The SAPs also have been shaped by feedback from a technical advisory group and will reflect market assessments conducted by Economic Research Associates and market issues discussed with developers. "It's essential that the plans be grounded in market reality," said Errington. Affordable housing studies (conducted by Diana McIver & Associates) also are shaping the plans. The interim TOD ordinance set an aggressive goal of having 25% affordable housing within each privately developed district; achieving that goal would most likely require public involvement or subsidies.

One weakness at Workshop I was that participants received little or no education – even of the crash-course variety – in the underlying urban-design principles relevant to transit-oriented development and station-area planning. Workshop participants would do well to prepare by first perusing the city's very informative TOD website (www.ci.austin.tx.us/planning/tod). On the station-area planning page, and under each TOD location, a helpful newsletter provides background information on the process to date. A resources page provides links to other sites that cover TODs in depth.

The Downtown Austin Alliance hosted a June 12 community luncheon on transit planning followed by a TOD workshop by Reconnecting America, a nonprofit organization that promotes transit-oriented development nationwide (www.reconnectingamerica.org). That presentation made compact development around transit stations sound like the best idea since railroad tracks. "Why is TOD good for cities and suburbs?" asked Reconnecting America staff rhetorically. The answer: For all the reasons that sprawl and car-dependency are bad. Key for Austin is preventing increased traffic congestion as the city continues to grow. Related benefits include sustainability (more efficient use of land, energy, and resources), conservation of open space, less oil and gas consumption, cleaner air, increased city revenues with lower tax rates, healthier lifestyles, and more vibrant neighborhoods. Increased property values, sales taxes, and rents also can be expected as areas redevelop – great for the city's tax base, not so popular with many taxpayers. Especially in East Austin, gentrification and rising property taxes are a central concern.

Reconnecting America argues that a household's housing and transportation costs should be weighed as a "budget bundle." Research studies they quoted show that many working-class households could gain discretionary income by living close-in, within walking distance of transit. While housing may cost more, total annual transportation costs can drop more than enough to compensate, if one less car is required. Currently nearly 12% of Austin renters have no car available; that percentage may rise with gas prices. National demographic trends show growth in the groups that historically have preferred to live in high-density housing near transit – single adults (now 41% of households), the child-free, older Americans, and nonwhites.

Adopted neighborhood plans that overlap the TOD districts will strongly influence the station-area plans – and vice versa. PB planner Brian Newman said he doesn't expect the SAPs to add significantly greater housing density or height than the suggested guidelines in Austin's TOD interim ordinance. (For neighborhood center TODs, such as the three now being planned, that's typical building heights of one to six stories and average housing densities of 15 to 25 units per acre.) What the SAPs will add, he said, is more safeguards on good design and on honoring neighborhoods' character. But he added: "We want people to be real sober about what it takes to implement these visions. The city is just one actor in that process. It also includes hundreds of property owners."

Once the station-area plans are formally adopted by council, each property within the TOD district will have new TOD zoning. The final zoning provisions for densities and building heights will vary and will be influenced by each SAP process. This alone is reason to participate. Residents should be aware that the city code's compatibility standards, which normally prohibit tall buildings next door to private homes, will no longer apply in TOD districts (except in transition zones).

Each TOD district affects several different neighborhood planning areas defined by the city. For the MLK station, it's the Chestnut, Rosewood, and Upper Boggy Creek NPAs. The North Lamar TOD overlaps Crestview/Wooten and Brentwood/Highland. The Plaza Saltillo TOD overlays the East Cesar Chavez and Central East Austin NPAs. At Workshop I for Plaza Saltillo, in particular, some participants expressed anxiety about the area's rapid change. Adding to the confusion: An earlier planning process begun by Cap Metro for its 11 acres there has been tabled until the overall TOD planning is done.

Some community activists have questioned whether the existing atmosphere of frustration and mistrust around the city's neighborhood-planning process will taint citizen faith in the TOD process. "The city needs to give the citizenry a greater level of confidence that the community workshops aren't just an exercise," suggested Glenn Gadbois of the local Alliance for Public Transportation. "To convince people that their input will actually affect policy, they need to have high-level staff with authority at the public workshops. Give people real information on what really can be done differently and what can't. Work with them to agree on a set of trade-offs. For people to feel good about being engaged, they have to have some real control."

Errington said that's what PB PlaceMaking will encourage. "A plan is only as good as the follow-through and the implementation," he noted. "So we're going to spend a lot of time with the city to get them to focus on that." He said a critical piece will be having a person with real authority and responsibility, as well as personal energy and passion, in charge of TOD implementation. He also cited the importance of translating SAPs into capital-improvement plans, providing sufficient funding and putting in place zoning, incentives, and other tools – all of which PB will address with its work with the city and community.

City TOD principal planner Sonya López sees station-area planning as a real opportunity for neighborhoods to have the city devote resources to implementing their plans. (As last week's column discussed, this is sorely needed in Austin.) "Transit-oriented development is an extension of what's already requested in neighborhood plans, which is mixed-use," said López. "With TOD, we'll have new zoning tools available. TOD planning is more focused and more specific than the neighborhood plans, and we'll have an implementation strategy – we're actually going to try to make it happen."

"Cities don't have the choice of not changing," observed Errington. "The question isn't whether Austin's neighborhoods will change – it's, 'As they change, how do you make them better?'"