Our notes on the candidates

Tweet
print
write a letter
This week, city officials, the community, and the local media got their first public meetings with the five remaining candidates to become Austin chief of police. The candidates met with the media at the Downtown Hyatt on Sunday, then attended a dinner reception with City Council members and other officials. On Monday and Tuesday, the city held three forums at the Palmer Events Center. City Manager Toby Futrell said she would be announcing her choice by Friday, June 15, and forwarding that recommendation to the City Council for consideration in its June 21 meeting. The following are our notes on the candidates.

Acevedo is young (42), enthusiastic, and eager. He has more than 20 years police experience with the Los Angeles Poilce Department and the California Highway Patrol. He's engaging and comfortable in front of a crowd and says a priority is to be open and available to police and community. As Austin chief, he says, he would "be the most visible person in the community," and it's important for a chief to get out and work on patrol so that he can understand the police-community dynamic. Acevedo says setting clear, high standards for officer conduct is fundamental – including effective and consistent disciplinary processes – and crucial to achieving lasting community trust. There's a "distinct line between right and wrong," he says, and "people rise to the level of expectation you set."

In deadly force situations, officers must decide not only whether force is justified by law and by police policy but also whether the use of force is morally justifiable. "To be frank," Acevedo says, there are times where force may be justified yet is avoidable because the action is predicated on "tactical errors." Determining whether procedural errors played a role in the escalation of force is critical – and can help identify problems within a chain of command, or highlight areas where better training is needed. Maintaining clear and open lines of communication is crucial to developing a strong department. Community policing is key to creating "mutual support, a [shared sense of] responsibility, and an ongoing dialogue" between the public and police.

Dotson has more than 33 years experience, including 23 years with the Houston PD and seven years as chief of the Chattanooga PD. He began his career as one of the first black officers in Houston and had become an assistant chief before leaving for Tennessee. "Building trust among the community is the most important thing [a chief] can do," says Dotson, also noting that the department needs to focus less on the "low-hanging fruit" of locking people up and more on "families and neighborhoods" as the center of community. He would use "geographic policing" to make sure police are targeting the individual needs of each Austin community.

APD needs "superior leadership" to make the department a great one, he says, adding that he had challenged his Chattanooga administrators to make a "lifestyle change" within a department that needed to be rebuilt "from the bottom up." On questions of excessive force, he says force might have been "justified" in certain instances, but not "necessary," and that officers need consistent expectations as well as consistent discipline. He says his Christian faith provides the "compass" he needs to make tough decisions and remain "focused on where I need to go." 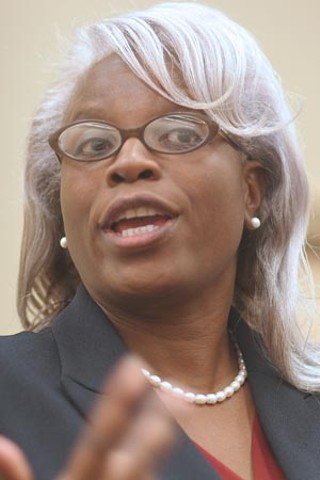 Ellison acknowledges the advantages and disadvantages of incumbency and says her 27 years with the APD – as its first black female officer – offers her a unique sense of the department. She says the department has changed dramatically during her career – both technologically (there were no computers when she started) and philosophically, with a diminution of racism and sexism, as well as advances in community policing. "We've worked very hard to build trust in the community," she says. And that's a relationship "we have to constantly work on." The key to developing and maintaining trust is "telling the truth all the time," she says. "That's the only way people believe what you say, and it takes time for it to work."

Ellison says she initially didn't intend to apply for the position, expecting to retire this year, but a friend persuaded her that "It's not about you any more; it's about the city and what it needs." She acknowledges that in recent years the city has traditionally recruited its chiefs from outside Austin but says, "I grew up in this department, I persevered, and I wanted to make a difference." She declines – with a laugh – to say what she'll do if she's not chosen as chief.

Reinke spent more than 25 years with the Milwaukee PD, becoming assistant chief before leaving in 2001 to become chief in a small Florida resort community. Asked why he wants to return to the pressure of big-city policing, he jokes, "Some people have suggested I consult a mental-health professional" but adds that he misses the professional challenges. Reinke says he has learned the importance of building strong relationships within City Hall while in Florida – especially with the city manager. He is still "awed" by the power police have – to take away both liberty and life – and believes that power should be wielded with reverence. It's important for police and community to share "common ground" in creating a "safe city" and to "protect the rights of everyone as we do it," he says, also noting that the city should rely more on major local resources – such as the university communities – to achieve these goals.

With a commanding presence and an easy smile, Wiles looks like a hybrid: one part "cop's cop," one part Officer Friendly. Wiles says the "police department belongs to the community it serves" and that department policies should "reflect community standards." He's been at the El Paso PD since 1982, becoming chief in 2004. As chief he says he has created "high standards and a strong disciplinary process," which includes a clear "disciplinary matrix" and requires officers under investigation to submit to polygraph examination. Community standards are also evident in the PD's use-of-force policy, which Wiles says is more restrictive than state law, and all officers are also trained in mental health. "I think [policies] have to be consistent with community standards," he says. That consistency has earned him the respect of the department and the community, he says, and has meant that in times of crisis – say, in officer-involved shootings – the community has trusted Wiles to find the truth and mete out appropriate punishments.

Effective recruiting is key to an effective force – "not everyone can be a police officer," he says. In Austin, he says, he would work to diversify the force so that it more clearly reflects the composition of the community it serves, and he would concentrate on "putting the right people in the right places in the field."