Bridging the Gap at Green 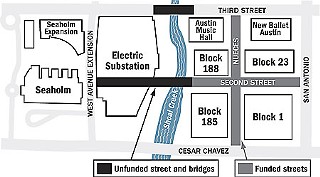 The problem with postindustrial design – nicely exemplified by the current municipal fascination with redeveloping Downtown's southwestern waterfront – is that infrastructure like the decommissioned Seaholm Power Plant and the Thomas C. Green Water Treatment Plant weren't conceived in anticipation of underground parking, faux-bohemian coffee shops, or coordination with the latest IKEA collection. They were designed for efficient, incessant, and sometimes brutal industrial use: intense electrical generation and churning pools of treated water, not an idealized facsimile of urban life. Would you have longed to live in Seaholm while those massive turbines whirred? By that standard, the residents of Holly Street have lived the concrete-floored dreams of Downtown's denizens for decades.

So we shouldn't be surprised when the redevelopment process takes longer than expected – it's not like the last tenant was Old Navy. This was the unwelcome word to City Council last week, as staff announced that the decommission and demolition of Green WTP would be delayed by 15 months – from November 2008 to February 2010. Officials cited several reasons: stabilizing the neighboring bank along Shoal Creek, moving massive underground infrastructure, and other environmental problems, "an incredible amount of logistical and physical challenges," said Mayor Will Wynn.

Despite grimaces on the dais, council still dreamt big, tossing up ideas of what they want on the four-block plot. Bridging Second Street across Shoal Creek – connecting Green to the pending Seaholm development – topped the wish list, the extension costing as much as $11 million on top of Green's current $27.5 million price tag. Seaholm continued to shadow the conversation, with Brewster McCracken floating a trial balloon locating the $90 million new central library – sold as the centerpiece of Green's redevelopment – instead on the former electric substation west of Shoal Creek. (That wouldn't have anything to do with Green's four quadrants being unencumbered by Capitol-view corridor restrictions, could it? At least council announced it would abide by waterfront overlay ordinances on the tracts – mighty white of them!)

There also came the question of what the library would ultimately look like. McCracken called for developers to present two designs – one positing the library as a stand-alone building, the other incorporating a vertical mixed-use design (i.e., other uses). Lee Leffingwell disagreed; noting that the $90 million bond only covers the first phase of library build-out, he said its initial incompletion "makes it almost unfeasible that it would be a mixed-use building of any kind." (The band of library supporters present, not longing to file Starbucks under the Dewey DS, applauded.) The meeting ended as Laura Huffman recited council's plans back to them – the substation, differing designs, Wynn's idea of underground parking spanning Green's quadrants, and Jennifer Kim's insistence on local tenants in Green storefronts. The Gap Water Treatment Plant? No thanks.

Having threatened to appear at City Hall with bags of human feces (a homeland security charge waiting to happen) in his last communiqué to council, Small Business Group leader Carl Tepper sounds scarcely better than the fecally promiscuous band of transients he battles in the befouled stairwell of his psyche. Carl is hot under the collar about a transient taking a shit on the stairs in his managed property, and prolonged exposure to the dookie fumes have convinced him that this is somehow City Council's fault – not his own for failing to buy a lock. In his newest screed to city officials, Tepper threatens action against council for not being tough enough; Tepper advocates a policy approximating internment camps for those scofflaws bivouacking under overpasses. (In other words, homeless shelters should more closely resemble "psychiatric wards" with "mandatory residence after the third public intoxication or sleeping in public. … We don't want to hear any more legal-issues excuses." Thing is, if there were enough psychiatric wards in the first place – no thanks to reflexive antitaxers like Tepper – he might have a case.)

We'd normally give this type of tripe the attention it deserves – absolutely none – but the repeatedly discredited yet ever-resilient "broken windows" notion of policing is back again, inevitably, this budget season. If the city's financial forecast is indeed as dire as we've been assured, then further prioritizing small-bore property crime like graffiti – which already has its own full-time detective – is ludicrous. As for homelessness, it'll only be addressed by continued outreach, smart city policy, and truly affordable housing – not by unleashing the hobo gestapo every time a failed City Council candidate's stoop is shat upon.

Off this week, council returns June 7 to consider the delayed budget policy discussion.