The T. Don Hutto Residential Center, which critics say would be better described as a prison camp, is now possibly the scene of a sexual assault. (Photo By Jana Birchum)

The federal Immigration and Customs Enforcement is in the hot seat again – over an alleged incident of "inappropriate contact" between a guard and a detainee on Saturday, May 19, at the T. Don Hutto Residential Center in Taylor. Operated by the for-profit Corrections Corporation of America, administered by Williamson County, and funded by ICE, the Hutto detention center incarcerates federal detainees subject to deportation – specifically women and children, a practice that has rained international ire upon the facility. Rumors are flying about the exact nature of the inappropriate contact, but none can be substantiated. ICE's announcement characterized the contact as "relations between two adults," implying the contact was both sexual and consensual but vowed it took such behavior "very seriously."

However, incident documents indicate that something more serious was suspected at the outset by both federal and local law enforcement. On May 20, Pete Del Angel, a higher-up who works out of the ICE Detention and Removal Operations Office in San Antonio, called the Taylor Police Department to report a "possible assault on an inmate" and asked to speak to an officer, according to TPD dispatch records. The phone number Del Angel called from was the extension of ICE agent supervisor Roy Armendariz, at the Hutto center. TPD dispatched Sgt. Mark Clark to the scene; he requested a determination of whether a sexual-assault nurse examiner was on duty at Johns Community Hospital in Taylor. Clark was then instructed to call the Williamson Co. Sheriff's Office, because that agency, according to county protocol, must handle all calls at the Hutto center. Clark left the scene when WilCo deputies arrived.

According to the subsequent WCSO police report, three WSCO deputies, Mike Hallmark, Gilbert Unger, and Lindsey Aigner, arrived on scene, with Detective Larry Hawkins assigned as the investigator in the case. The detainee was transported to Round Rock Medical Center. The report said the incident was reported as an "assault (victim)" that took place from "11:30 a.m. until 12:30 p.m." on May 19. However, after their investigation, WCSO officers labeled the incident as "official misconduct," instead of assault. The "evidence taken" notations were blacked out on the front page of the report provided to the Chronicle. Our request for the full version is before the Texas Attorney General's Office.

Another confidential source told us it had not really been determined yet if the contact was consensual or not. However, WSCO Detective John Foster announced last week that the conduct did not fall under any local or state laws, so WCSO turned the matter over to ICE. Jamie Zuieback, public information officer for ICE, said ICE "takes any allegations of wrongdoing by contract employees at our detention facilities seriously and thoroughly investigates such allegations." Neither Foster nor Zuiebeck would answer specific questions about the incident, preferring to reread the statement. For Corrections Corporation of America's part, a Capt. Wright (who wouldn't give his first name), who works night duty at the Hutto center, said, "I don't comment on anything!" when asked why his facility reported the incident as an "assault, with victim." There has to be an answer to that question, but it's not forthcoming from authorities at this point.

Despite ICE's assurances that the case is in good hands, the outlook appears bleak; a 2005 U.S. Department of Justice Office of the Inspector General report titled "Deterring Staff Sexual Abuse of Federal Inmates" flatly states that custodial sexual abuse, as well as assault, often go unpunished. Even if such sex is consensual, it is a crime, the report emphasizes – though only a misdemeanor offense under federal law. (Most states, including Texas, consider it a felony.) But victims are often afraid to tell the truth, resulting in a lack of evidence to file charges or convict. And in this case, ICE is essentially policing itself, proceeding with an investigation through its Professional Responsibility Office, with TPD and WCSO reportedly no longer involved. Perhaps the OIG should weigh in, for objectivity's sake. p>

*Oops! The following correction ran in our June 22, 2007 issue: In the June 1 article "Cover-up at Hutto?" an Immigration and Customs Enforcement employee's name was misspelled as Pete De Angel; actually, his last name is Del Angel. The Chronicle regrets the error. 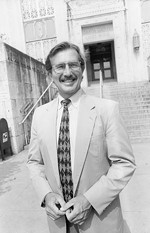