Speaker Siege: Where Were the House Women? 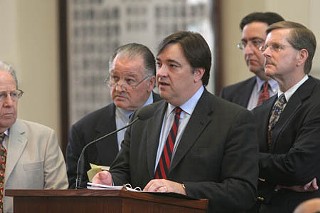 Although toppling Craddick was a worthy goal, it was obvious from looking at the rebellion's leaders that the Lege is still very much a boys' club. (Photo By Jana Birchum)

Here's a novel idea: How about letting the women of the House lead the next attempt to overthrow the speaker?

To be sure, the House revolt that played out over the Memorial Day weekend at the Capitol provided ample evidence that Tom Craddick has long outworn his welcome in the speaker's chair. But it wasn't until the postmortem work began that another unfortunate truth came to light – the Texas Legislature is still very much a boys' club. Mind you, this is not the issue one dwells upon in the face of the menacing triumvirate made up of Craddick and former House members Terry Keel and Ron Wilson, who looked more than eager to settle some old scores in the course of their newly assumed parliamentary duties. The two scowling honchos, both defeated in their last election campaigns, had been summoned to fill the vacancies created by the abrupt departures of Denise Davis and Christopher Griesel. The two parliamentarians flew the coop Friday night after Craddick dismissed their advice and refused to yield the floor to House members seeking a vote to vacate the chair. Clearly, his Royal Speakerness knew the votes on the floor were stacked against him. 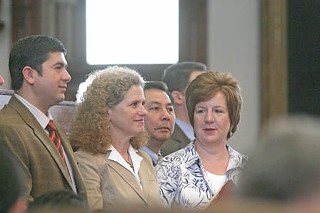 When the shoving started, it seemed that the Lege's female members – such as Austin Donna Howard (second from left) and Valinda Bolton (right) – were mainly focused on getting their bills passed in the session's waning hours. (Photo By Jana Birchum)

Craddick's defiance set off a weird chain of events. Davis and Griesel fled the dais, Craddick scrambled behind closed doors, House Democrats and anti-Craddick Republicans gathered in separate huddles to weigh their options, and everyone else was left hanging in suspense.

Outside the Capitol, a small crowd of legislative aides and hangers-on milled about, looking for clues to what would happen next. One rumor held that the diminishing number of pro-Craddick members would break quorum to prevent any more oppositional antics. "There goes Dutton!" someone shouted as a spiffy black truck whizzed out of the parking lot. That would be Harold Dutton, a Craddick D, whose speedy exit momentarily added weight to the quorum-breaking rumor. Time passed. Cigarettes glowed in the dark. Suddenly a figure emerged from the darkness. Alas, it was Larry Phillips, a Republican House member from Sherman, wandering aimlessly and looking lost. Someone asked him, "What's going on?" "I don't know," he said over his shoulder, and no one doubted him.

The quorum rumor was put to rest once Dianne Delisi, one of Craddick's veteran committee chairs, stepped outside to chat nearby. But her appearance also raised questions. "Is she with us?" someone asked, referring to the anti-Craddick forces. There was some deliberation about whether Delisi had crossed over. A voice in the crowd volunteered that she had not had a good session. Some of her bills should have been routed to her Public Health Committee, but they landed mysteriously elsewhere – among the many charges against Craddick is that he was manipulating bill assignments to his own private ends.

In the last few days of the session, Speaker Tom Craddick appeared besieged and isolated. (Photo By Jana Birchum)

After a while, the movable chorus of clue-seekers went back inside and waited for something, anything, to happen. Finally, at 10:34pm, the west wing of the Capitol's ground floor sprang to life, abruptly becoming Ground Zero for the anti-Craddick forces. Irascible Robert Talton of Pasadena, an implacable defender of House rules, emerged from his office accompanied by none other than Longview's ever-chipper Tommy Merritt, marked in vain for defeat by Craddick last November; the two Republicans are usually on opposite – or at least legislatively distinct – sides of the ideological fence. What an odd pair they made as they marched in lockstep across the hallway and into the office of Houston Democrat Garnet Coleman, yet another unlikely ally.

Within minutes, other Democrats began filing in, including Patrick Rose, who had just defected from the Craddick D ranks. Then came a parade of Republicans – Charlie Geren, Mike Krusee, Fred Hill, Jim Keffer, Ed Kuempel – it was hard to keep track. The total head count came to about 20. It was clear that at least in this particular venue, Democrats were calling the tactical shots.

Unless we blinked and missed her, there was no sign that Democratic speaker candidate Senfronia Thompson, or any other female reps, had crossed Coleman's doorway. Passing by, like an outbound ship in the night, was Eastside Austin's Dawnna Dukes – an apparently imperturbable Craddick D, headed for the elevator that would take her back to the House floor.

Some of the women members – let's say Donna Howard, Valinda Bolton, Veronica Gonzales, Ellen Cohen, Jessica Farrar, most of them freshman class – were more focused on getting their bills passed in the final hours than concerned about hijacking the speaker's seat. We'll take it up in the next session, they reasoned; we'll kick him out when the time is right. Even so, the nonparticipants couldn't deny that the testosterone-driven theatrics at the mic were unendingly entertaining. But just think, a female-led challenge in the next go-round might actually bear some independent fruit.