When Congress passed Iraq war spending bill last Thursday, it approved a raise in federal minimum wage for first time in a decade 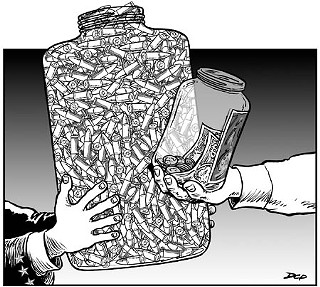 When Congress passed the Iraq war spending bill last Thursday, May 24, it also approved a raise in the federal minimum wage for the first time in about a decade. (Democrats had tacked wage-raise legislation by Sen. Edward Kennedy onto the bill as a provision.) Considering the minimum wage is at a 60-year low compared to the pay of workers in other nonsupervisory jobs – at least according to the Economic Policy Institute, a D.C.-based think tank that focuses primarily on labor issues – as well as the fact that the millions of U.S. workers earning $5.15 an hour can afford to buy the least amount of stuff they have been able to in 50 years, it's pathetic that Republicans and Democrats weren't able to come together to pass a stand-alone raise bill.

Something's better than nothing, however. According to a May 25 EPI brief, the wage-raise provision, which President George W. Bush signed into law Friday the 25th, will "provide a wage boost for 12.5 million workers. … [T]he first step of the increase – from $5.15 to $5.85 – will go into effect [in about 50] days. … The minimum wage continues to rise annually for two years under the legislation, reaching $7.25 in 2009."

"[I]t's about time," said Maude Hurd, president of the Association of Community Organizations for Reform Now, or ACORN, which ran one of the more visible national campaigns to raise the minimum. "All states now will have to comply with the federal law, or they'll be breaking the law."

Tired of waiting on Congress, 31 states and the District of Columbia have already approved legislation to push their minimum wages past the federal level. We aren't one of them, however. According to a statement from the Austin-based Center for Public Policy Priorities, "863,000 low-wage Texas workers earning less than $7/hour (8.5% of the statewide workforce) will see their wages increase. Of the U.S. workers directly affected by the minimum wage, 1 in 6 lives in Texas."

Christine Stephens, lead organizer in Texas for the Industrial Areas Foundation – a national umbrella organization founded in 1940 by Chicago organizer Saul Alinsky, under which several activist groups now fall, including Austin Interfaith – expressed mixed sentiments about the federal raise: "Good that there's an increase … bad that it's going to take until '09 … to get people up to halfway decent wages," she said.

The story doesn't end here, however – not yet, anyway. Kennedy plans to introduce a new version of his minimum-wage bill that will propose an increase "on the order of another couple of bucks over two years," said Ross Eisenbrey, EPI's vice president and policy director, in an e-mail. Kennedy spokeswoman Laura Capps confirmed the new bill will propose upping the wage further, but declined to elaborate.

Although Texas lawmakers didn't come close to passing minimum-wage legislation this session, some businesses that can afford it have already hiked their minimum above $5.15 an hour. Mike Davis, general manager of Pok-e-Jo's in the Hancock Shopping Center, said the federal hike won't affect his employer because the barbecue chain has been starting all of its employees at an $8-an-hour minimum for at least the past few years.

"You get what you pay for," Davis said. "You pay people what they're worth, they're going to work harder for you."

For more on the minimum wage, see "Days of our Minimum-Wage Workers' Lives," April 27.

Minimum Wage Woes
In failing to pass bill that would have led to federal minimum wage raise, Congress fails workers