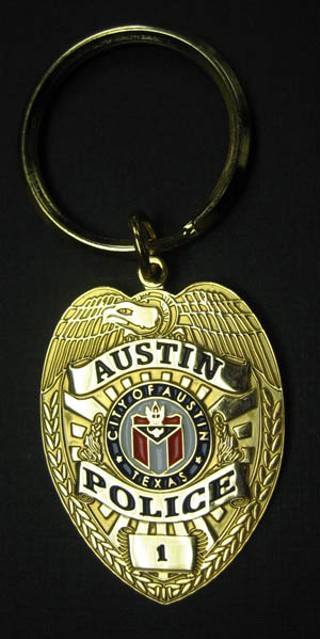 Until December, it was Austin Police Department custom to honor graduates of its Citizen Police Academy (an 11-week crash course on the daily workings of the cop shop) with a certificate and a patch. The patch was the real deal, just like those the sworn APD blues wear on their navy-blue uniforms. That changed, however, shortly after Chronicle staffer Nora Ankrum appeared on our cover, dressed in her Halloween-grade cop togs, the giveaway APD patch affixed to the left shoulder of her shirt, illustrating her experiences in the APD's long-running citizens' academy program ("My Semester on the Beat," Dec. 1, 2006). Shortly after that feature ran, APD sources say, acting Chief Cathy Ellison put out the word from her administrative office on the fifth floor of APD headquarters that the practice of giving out Police patches to anyone, including grads of the department's nationally known CPA, would end.

The official reason for the new no-patch policy, explained APD spokeswoman Toni Chovanetz, was to curb possible patch abuse – the possibility that civilians would use the power of the patch improperly, attaching it to an article of clothing for the purpose of illegally impersonating a police officer. Fake-cop problems pop up now and again, typically with reports of civilians being pulled over by someone driving a completely pedestrian-looking vehicle equipped with a single flashing light mounted on the dashboard. This can be dangerous for the public, of course, and impersonating a police officer is a felony, punishable by two to 10 years in prison and up to a $10,000 fine. Thus, at least on the surface, the patch rationale sounded reasonable.

Or so it seemed until last month, when I found myself holding the newest APD giveaway: a shiny gold key chain that's a perfect replica of an APD officer's badge. Emblazoned with the city's red, white, and blue logo and the "Austin Police" stamp on the front, the key chain badge is a three-quarter-size reproduction of the real thing. On the back, three lines of text read, "Acting Chief / Cathy J. Ellison / 2007." According to APD spokesman Kevin Buchman, the key chain was designed as a giveaway for the those attending the department's annual Community Network Conference, which an April 17 press release describes as an event "designed to unite neighborhoods, businesses, faith communities, law enforcement, non-profit organizations and public agencies to improve and impact the quality of life in Austin."

Police records show that the city paid International Badgeworks Inc., in Dallas, $830 to make 500 Police badge key chains. About 480 were handed out at the conference, reports APD; "less than 20" were left, Chovanetz wrote in response to the Chronicle's open-records request, "and Chief Ellison has those." Buchman said that the idea for the badge key chain originated with the APD Community Liaison Office (not with Ellison), although Ellison would have had to approve the expenditure. And, Buchman reminded me, the department hands out some sort of APD swag keepsake each year to conference participants – last year, everyone got a navy-blue notepad portfolio, stamped with the name of the conference on the cover. (Notably, however, the portfolio was not tagged with the name of then-Chief Stan Knee.)

It's not the fact that the department hands out goodwill keepsakes that has some officers upset (cop-shop swag is abundant – God knows I've ended up with my share of APD crap over the years, including an inch-thick stack of refrigerator magnets printed with the reminder that I should call 911 in case of an emergency). Rather, what has cops irritated is that no one seemed to consider what a strikingly bad idea it is to replicate a police badge – one that can easily, for example, be removed from the key ring and mounted onto a black leather wallet, thus mimicking perfectly the real thing. Chovanetz dismissed the concern as trivial – the badge is clearly smaller than the original, she said, whereas the patches previously handed out were perfectly authentic. Regardless, she said, anyone confronted by a questionable cop should always ask to see photo identification, which every APD officer carries. An APD badge has an "inventory" control number, not one that clearly IDs a particular cop.

It appears APD's administrators, including Ellison, simply didn't consider that a new, fake badge might be a good candidate for a patchlike ban – yet, ironically, the new acting Chief Ellison badge might be easier to come by. Consider this: The Community Network Conference, at the North Austin Crown Plaza Hotel, was, essentially, open to anyone; acceptance into the Citizen Police Academy, however, is tightly controlled and requires each applicant to submit to, and pass, a criminal background check. After all, we can't be giving out APD patches to just anyone, can we?