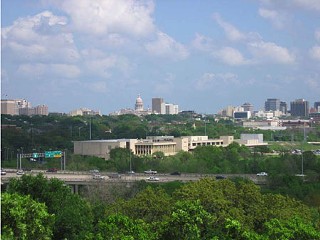 "The Capitol was intended to prevail over other structures, as community responsibilities were to dominate private concerns. ... Dramatically situated, 311 feet tall and crowned with its Dome, the Capitol was created to command the countryside. At the dedication ceremony in 1889, State Senator Temple Houston said ... 'This building fires the heart and excites reflection in the minds of all.' The combined significance of the Capitol and its setting requires a respectful viewing distance for appreciation. On viewing the Capitol from Mt. Bonnell, a view now blocked, a contemporary of Senator Houston said, 'The great shining dome of the State Capitol, soaring high above all other symbols of the commercial world, surmounted by the figure of justice [Goddess of Liberty] with hand outstretched ... in the native granite of the giant edifice is stored the dream of our Texas pioneers, who realized this site as the loveliest in all the state." – Capitol View Preservation Study, city of Austin, 1983

Motherhood, pecan pie, and the Capitol-view corridors – these things we hold sacred in Austin.

No dearth of reverence for the awe-inspiring 1888 Texas Capitol has been evidenced by recent sparring between two local volunteer groups – the city's Downtown Commission and the nonprofit Heritage Society of Austin – that hold differing opinions as to how the legally protected Capitol-view corridors should be treated. (A view corridor, defined by a specific vantage point but often encompassing many other Capitol views in its swath, effectively prohibits tall buildings that would obstruct the protected view; see illustration.) Others have joined the fray, including East Austin and West Austin neighborhood groups worried that removal of CVC height restrictions will lead to higher-rises in their hoods. The alarmed-to-panic-stricken tenor of the controversy speaks as much to Austin's conflicted feelings about increased density and galloping development pressures as it does to Capitol veneration. The Goddess of Liberty is a lofty lightning rod for our collective anxiety about growth.

The Downtown Commission vs. Heritage Society debate has flared around a review of the view corridors initiated by the Downtown Commission. In a March 29 draft report, the Downtown Commission dared to find fault with 11 of the 30 corridors, which have been protected by city and state law enacted between 1983 and 1985. These 11 CVCs were "recommended for re-evaluation, modification, or further study based on current criteria established by this Council." A key criteria: the mayor's 2005 mandate that Austin needs to have 25,000 people living Downtown (mostly in high-rises) within 10 years.

Fears that the Downtown Commission's CVC review is motivated by development interests – specifically, a desire to build residential high-rises within existing view corridors – are accurate. Some Downtown Commissioners long have wanted to revisit the development restrictions imposed by the view corridors. As Austin rides the current development upcycle – hard, fast, and tall – commissioners like Robert Knight (himself a broker/developer) have questioned whether or not some view corridors, with views partially obscured or rendered less valuable over time, were unnecessarily hindering Downtown development and thus the city's tax base. Mayor Will Wynn shares this concern and put a review of the corridors on his list of priority projects last November at the council's retreat.

To preservationists, the very idea of a "cost/benefit" analysis – putting a price on civic values like beauty and honor – is anathema. Other Texas historical societies support HSA's official position: "The Heritage Society of Austin strongly opposes any modification to the existing Capitol View Corridors." Backing them up is a May 10 letter to Mayor Wynn from the Austin-area delegation of the Texas House of Representatives, urging continued protection of the corridors as they stand. Signed by 141 legislators is an attached statement: "WE are opposed to the City of Austin Downtown Alliance recommendation to remove the Capitol Corridor View." (That would be the Downtown Commis-sion, legislators, and exactly which "view" did you have in mind?)

Indeed, state law protects all 30 Capitol-view corridors. It would require action by the Legislature – which won't convene for another two years – to address even simple technical problems identified by the Downtown Commission. For example, the Downtown Commission recommends correcting an erroneous elevation found for CVC 25 (Oakwood Cemetery); even HSA "finds this to be a reasonable and positive recommendation and does not oppose its adoption." City code protects 26 CVCs, six of which differ slightly from the state version (don't ask); where they conflict, the stricter requirements now prevail.

"In late 2006, a Committee of the City's Downtown Commission initiated a 'review' of the corridors. Because of its limited membership and provincial scope, the Commission was not well suited to perform this important task, and the Commission's involvement is inconsistent with the traditional delegation of corridor issues by the City. There are also significant and important questions raised by the participation of some members of the Commission with regard to the standards of conduct enumerated by the City Code."

The 34-page HSA response also takes issue with the commission's methodology. The criticisms include "subjective criteria, incomplete research, and questionable rationales," a failure to adequately involve neighborhood associations and planning teams affected by the proposed changes, and a concern that "Commission members may have misused their positions of public trust" due to their personal development interests in Downtown property. These pointed criticisms earned HSA President-elect John Donisi downright snotty treatment by Commissioner Chris Riley and a counterattack from an incensed Commissioner Knight when Donisi appeared before them at their May 16 meeting – a rather unseemly display before a quorum of the Design Commission, the Planning Commission, and the ROMA Design Group team, all on hand for another agenda item on the Downtown Austin Plan. Knight did make the point that, rather than preventing high-rises, partial CVC restrictions on a parcel have served to stimulate architectural creativity, producing better-proportioned buildings with just as many living units.

As illustrated here, a view corridor is a plane that extends from the vantage point or points to the base of the Capitol dome. The center of the dome is at 653 feet above sea level. No structure is permitted to pierce the plane of a protected Capitol-view corridor. The effect that a particular view corridor has on the developability of the land beneath it is a function of the height and width of the plane and the land crossed by the corridor. (Both images from a draft report of the Downtown Commission on Downtown Development and Capitol View Corridors, April 2007.)

(Whatever one thinks of HSA's criticisms, it is worth noting that primary response author Donisi demonstrated a certain moral courage in detailing commissioners' possible ethical conflicts. As an up-and-coming real estate attorney, who works closely with development power-lawyer Steve Drenner, Donisi regularly must bring his clients' projects before the Downtown Commission for approval.)

One View or Many?

Another cogent point raised by HSA: The Downtown Commission failed to include in its preliminary review process or recommendations any consideration of the many other good Capitol views that may be protected within a CVC. Stated the HSA response:

"Many of the recommendations for elimination or revision proposed in the Report depend upon a fundamental misunderstanding of the purpose and function of a view corridor. The Commission appears to embrace – with no authority cited – the belief that the sole purpose and function of a view corridor is to provide a single view of the Capitol from a single physical point. ... There is no basis for this interpretation, and significant support that suggests otherwise. The 1983 Capitol View Preservation Study performed by the Planning Department and cited in the Report specifically recognized and accepted that each corridor may contain multiple viewpoints, allowing and encouraging the viewing of the Capitol not merely at the single point of origination, but throughout the corridor."

Rather than recommend possible elimination of a CVC because the defining viewpoint is partially obscured, as with CVC 10 (Pleasant Valley at Lakeshore), said Donisi, due diligence requires a thorough process that considers all valuable views that may be protected throughout a particular corridor. Downtown Commissioner Jeb Boyt recently concurred; he invited Austinites to notify the commission about any such views they are aware of, especially in their neighborhoods.

Leave It to ROMA

Is it fudging the truth to say that the Downtown Commission was "charged" and "directed" to undertake its extensive review by council as a body, as commissioners have repeatedly and publicly stated? The transcript from the Sept. 28, 2006, council session, where this directive supposedly occurred, sheds a different light. At that session, Boyt presented a commission report and map on Downtown Sites & Development Potential; the map indicated a lack of sufficient developable sites for new residential towers in the Central Business District. This led to a discussion between Boyt and Council Member Brewster McCracken about how CVCs were limiting building heights. McCracken asked, "Do we have a sense of how many of the view corridors are still achieving their original intent?"

In response, Boyt volunteered, "Well that, actually, is one of the things we're really looking and wanting to do is provide a detailed inventory and examination of how many of the view corridors are still provide unobstructed views and how many are obstructed and really look at the value that we're getting from each of these view corridors."

To which Boyt replied, "We'll be glad to bring a revised map back to you." Given this small opening, the group of Downtown commissioners then launched into the detailed review and recommendations for all 30 CVCs that they'd been wanting to do.

To their credit, the volunteer commissioners – many with distinguished records of public service – have labored long and hard on the report. Their careful work has turned up many issues worthy of addressing, such as the need to remove landscaping or signage that now partially obscures protected views. While the ethical concerns raised by HSA merit close attention, the developers and Downtown landowners in question give every evidence of caring about protected Capitol views and of acting in good faith.

Ultimately, the Downtown Commission – while they've opportunely defined the conversation to come – will be just one of many stakeholders consulted as part of the Downtown Plan. Recently McCracken clarified that while he appreciated the commission's efforts, "We did not charge them with this job." It is within the rights of any city commission to conduct a relevant study of its choosing, said McCracken, but "the intent was always to have the view corridors looked at by ROMA, as part of the Downtown Plan. Their process includes extensive stakeholder input, to ensure that everybody is heard. It's ROMA, and not the Downtown Commission, that council has officially authorized to review the capitol view corridors for us."

In any case, emphasized Commissioner Riley at the May 16 meeting, "This is the beginning of the public process, not the end of the process."

The Downtown Commission's preliminary draft report is at www.capitolviews.info. The Heritage Society response is at www.heritagesocietyaustin.org. You may submit written responses to the report to the city's Downtown Officer Michael Knox at michael.knox@ci.austin.tx.us. And as always, please comment on this story.