Citizens and city come together to restore an Austin landmark This Saturday, June 2, marks the grand reopening of the Deep Eddy Pool bathhouse, a historic structure now listed, since 2003, in the National Register of Historic Places. Austinites owe the historic registration and the rebuilding of the nearly 70-year-old bathhouse to a remarkable grassroots effort organized by a couple dozen people, most of them regular Deep Eddy swimmers, who began by looking for ways to help improve pool maintenance and eventually found themselves managing a million-dollar project to restore the bathhouse. The historic registration itself was a master's thesis project of Hannah Swenson Vaughan, then a UT graduate student in the School of Architecture. In addition to restoring to its full glory an Austin landmark that had fallen nearly into oblivion, the group established a citizen-community effort that is already becoming a model for future Austin public works. "Basically, it's been all-volunteer," said Leon Barish, "just people coming together who have a love for the pool. I think it's perhaps the best example that the city could point to, of how successful a public-private partnership can work to get something done for the city and for its people." 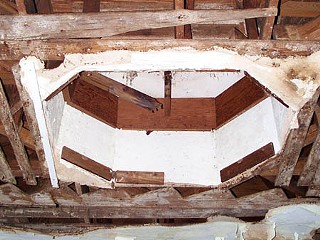 In 2003, the roof over the old entry kiosk was near collapse, with the wooden spire breaking through the ceiling and leaning precariously.

Local attorney Barish is the president of the Friends of Deep Eddy, the volunteer group that incorporated in 2002 to begin formally raising funds for the bathhouse project. Before that, FODE was "just a list of names," said member Paul Bardagjy, who began gathering those names on the pool deck in 2001 in an effort to organize a group of people to lobby the Aquatics Division of the Parks & Recreation Department on matters affecting the pool. Aquatics Director Farhad Madani (now an assistant PARD director) was supportive, although members say PARD officials initially adopted a wait-and-see attitude as the group's ambitions grew. Madani and PARD became believers as the Friends kept their focus, built on initial efforts, and maintained their determination to complete the restoration. Says PARD Assistant Director Stuart Strong, "The FODE have brought substantial resources to the project and basically made it possible. Rarely do we have citizens who take the time and effort to organize and spearhead the project, and especially raising a substantial amount of money, as they have." The decision was made to repair the pagoda-style roof immediately, while maintaining the original structure and as much of the original materials as could be salvaged. That work was completed in June 2005. The modernized and enlarged kiosk, finished this month, now sits under the restored roof with its new spire. (Photo By Jana Birchum)

From a longer perspective, the community-based support of Deep Eddy is an integral part of its history. The National Register calls it the "Deep Eddy Bathing Beach" – because that's how the story began, more than a century ago. Originally a swimming hole taking advantage of a rock-formed eddy in the Colorado River (later blasted away as a safety hazard), the pool – spring-fed via two hand-dug wells and combining an adult swim-lane area as well as a huge family wading pool – was built above the river in 1916 by A.J. Eilers as a privately owned bathing pool, complete with amusement attractions like a Ferris wheel and a diving-horse act. The pool, the first open-air concrete pool in Texas, was a commercial success until the Thirties, when it fell on hard times. In 1935 the city purchased the property – and two weeks later a massive flood filled the pool with mud and debris and destroyed the original bathhouse. That disaster begins the modern history of both the pool and the bathhouse. The city applied for rebuilding funds from the federal Works Progress Administration, using a bathhouse plan drafted by then recent UT graduates Delmar Groos and Dan Driscoll. It was modified a bit in progress – to save money they eliminated the roof over the men's changing room, creating the open-sky style replicated in the current reconstruction, and that would become the model of the Barton Springs bathhouses, built a decade later. The projects sponsored by the WPA (one of the relief agencies established by the Roosevelt administration) were performed by teams of experienced craftspeople and semiskilled laborers learning a trade, using local materials (e.g., cut limestone at Deep Eddy) and rustic architectural plans. 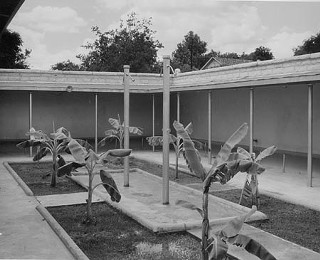 Much of this architectural history will be new even to regular swimmers, since for the last 40 years or so, only a third of the building has been in public use. In the Sixties, the Austin Nature and Science Center was moved into the eastern portion of the building. (There remain a few almost-invisible abandoned cages in the woods down the hill.) When the center was moved to new quarters, some of the bathhouse building was adapted first to Aquatics offices and then to neglected storage. Cutting air-conditioning ducts into the pagoda-style roof had been a final insult – when the would-be restorers re-entered the building in spring 2003, they discovered the roof near collapse and vermin in permanent residence. "The roof was all caving in, and the thing was inhabited by raccoons," recalls Bardagjy. "Within five or 10 minutes, we all had to run out the door, because we all had fleas up our legs – I had flea bites all the way up to my waist." 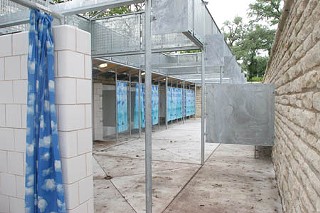 The women’s changing room (facing north), nearly completed, showing the changing cubicles and the overhead decorative screens designed to allow air circulation and light while maintaining privacy and the historic outlines of the restoration. (Photo By Jana Birchum)

David Escobedo of Escobedo Construction remembers that day, when he ran with the others and then suggested that they restore the roof as soon as possible. "'I think you have enough [funds] to fix the roof,'" he told them, "'and you can have a little gathering.' And they had the mayor come, and we hoisted him up so he could beat on it with a sledgehammer. So you had all that kind of stuff – and more people got interested in it, and it was something that got fixed, so guys could stand in there and work on it and not get wet. And people could look at it and say, 'Oh, wow – it is happening.' " David's son Matt became the on-site construction manager, and rather than broker the work like a general contractor, Escobedo's employees performed the bulk of the labor themselves. Before the restoration, the women’s changing room had become an empty shell open to the elements.

Much of the early funding had been raised incrementally – from the public swim events organized by master swimmers Keith Bell and Sandy Neilson-Bell, commemorative T-shirt sales, and special events – but with construction visibly under way, it became easier for the Friends to solicit major grant support. With the economy still reeling from the post-9/11 recession, it remained slow work. But several major funders came through – the Houston Endowment, Austin Community Foundation, Moody Foundation, and so on. Money seeded money, recalls Barish. "Michael and Susan Dell Foundation started out with a $25,000 grant, and they told us, come back when you get to 80 percent of your goal. ... We did get to 80 percent in June of last year, and we did go back to [Dell] at that time, and that's when they gave us a huge grant, $125,000 – so we have a total of $150,000 from them." 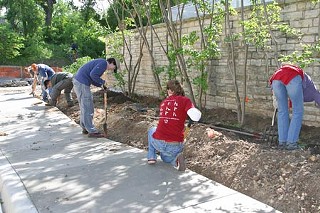 Friends of Deep Eddy landscaping volunteers at work outside the entryway to the restored bathhouse, May 2007 (Photo By Jana Birchum)

Meanwhile, Austin was digging out of its economic doldrums, and when the City Council saw the seriousness of the Friends' effort, it eventually committed $250,000. And meanwhile, individual citizens continued to contribute small amounts of money and volunteer work – in the end, more than 700 individuals and businesses will be listed on the "donor wall" to be erected on the site. And the project doesn't end here – $5.1 million in last year's approved park bond money is earmarked for the pool itself, since it's time for the entire shell, worn out and leaking, to be replaced. Barish says the swimmers are content to wait before that part of the project begins. "Let's enjoy it for a couple of years, and then we can plan the full replacement," he said. "There's going to be a lot of issues about how it's going to be done. We'd like to see it historically accurate, except for changes that need to be done for modern pool management."

Historical accuracy was also a priority for bathhouse restoration architect Laurie Limbacher – although there will be several significant alterations (like disability access) to improve conditions for staff and swimmers. The most notable changes are two: Women swimmers lobbied for a roofless changing room (with a decorative metal gable to allow air circulation and discourage prying eyes) and a concrete-cooling system that recirculates the pool's cold well water through the floor to make the work space more comfortable in summertime, without air conditioning. In anticipation of Saturday's opening, the Friends have been working hard on landscaping the entryway, and the restored ornamental gates will open to a theatrelike kiosk where swimmers will enter before turning to their respective changing rooms. "I hope people like it," says Limbacher. "The restored building certainly will be an expansion over what was there before. In recent years, the building was always really missing something, so to restore that entry sequence I think will be really quite nice – to come in the way you originally would have, and then when you come out of the building, to be standing in that beautiful place on the terrace overlooking the pool."

Now that the Friends' work on the bathhouse project is nearly finished, Leon Barish concedes that it feels "wonderful." "When I sat on the bench in the men's room and just kind of gazed out, it felt very natural and very good, and I look forward to sitting there and gazing at the banana trees," he said with visible satisfaction and pride. "I'm grateful to everybody who's worked so hard on it and 700-plus businesses and individuals in Austin who have helped out in terms of their dollars and their work. ... I've been to many, many pools throughout the United States, in particular spring-fed pools, and Deep Eddy is certainly one of the top five or 10 in my book. And with this restored bathhouse, I believe it is now the crown jewel for Austin public pools – at least right up there with Barton Springs."

10am: Dedication and ribbon-cutting

11am: Tour of bathhouse & pool opens 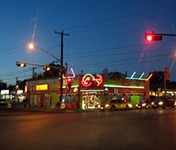 The People Have Spoken: Here are your icons
The results of our "Icon or Eyesore?" contest are in 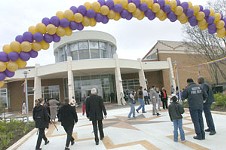 Naked City
Headlines and happening from Austin and beyond