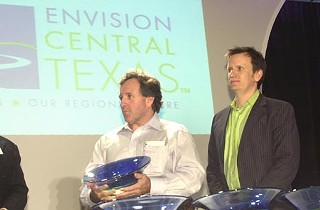 Now that Central Texans have envisioned what we want for our region, are we making it happen? Keeping that issue in the public spotlight is one purpose of the annual Community Stewardship Awards, given out by Envision Central Texas. This year's awards, announced May 18, "honor visionary people, projects and processes that are helping to ensure the region's livability in the future," said ECT in a press release, and "recognize people and organizations that are addressing the challenges facing our region in ways that will help make the ECT Regional Vision a reality."

Envision Central Texas was formed in 2001 to assist in the public development and implementation of a regional vision to address the growth of Bastrop, Caldwell, Hays, Travis, and Williamson counties. The resulting planning vision focuses on preserving and enhancing natural resources, economic vitality, social equity, and overall quality of living. Developed with input from thousands of Central Texans, it addresses development patterns, transportation, housing, density, open space, recreation, and social issues. Because ECT lacks regulatory power, however, its vision can only become public policy if cities, counties, and other bodies officially adopt its principles, said Executive Director Sally Campbell. Judging criteria for the awards included the nominees' positive community impact and how well they exemplified or reflected the Envision Central Texas vision, Campbell said. For a list of this year's Community Stewardship Award winners and for more info about ECT, see www.envisioncentraltexas.org.