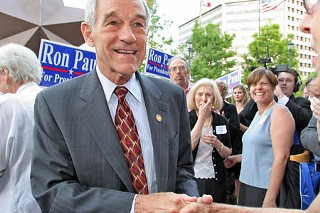 Earlier this month, U.S. Rep. Ron Paul, R-Surfside, predicted that the May 15, 10-candidate, Republican presidential debate in South Carolina would likely be a rough one for him – after all, he doesn't exactly toe the current party line, he told me over the phone, and that makes him a target. Man, was he right: In response to a question about American foreign policy in the wake of 9/11, Paul replied that our years of misguided meddling in foreign affairs, particularly in the Middle East, about which we seem almost willfully ignorant, was in part what prompted the 2001 terrorist attacks. While Paul's answer was a fair and reasoned one – certainly traditionalist Republican in approach and, in part, an observation echoing the findings of the 9-11 Commission – it also was received as radical. Paul's answer prompted former New York City mayor and flag-waving one-note-wonder Rudy Giuliani to attack, angrily claiming that the congressman's answer was misguided and inappropriate; amid fawning audience response, Giuliani demanded Paul apologize. Notably (and thankfully), Paul refused. That hasn't gone over well with the now-dominant militant wing of the GOP – unbelievably, Michigan party Chair Saul Anuzis actually said he would circulate a petition seeking to ban Paul from future debates, based on his comments last week; that, in turn, has sparked a pro-Paul counterpetition (www.petitiononline.com/RPRNC08/petition.html), which may have been what prompted Anuzis back down on Monday.

In all, the recent debate dustup highlights the most striking thing about the hybrid Liberepublican congressman from coastal Texas: He operates, unwaveringly, from a distinct point of view – in general, informed by the desire for a leaner and less-intrusive federal government, an emphasis on individual liberty, and faith in free-market economics. Now, you might not agree with everything Paul says (hell, you might even think he's a tad "wacky" – God knows it wouldn't be the first time he's heard that one), but he is consistent – popularity be damned – and that's refreshing.

As such, perhaps it isn't surprising that Paul is a staunch supporter of legalized industrial hemp farming – it is an issue that should be decided at the state level and not by the federal government, he says, and most certainly not by the Drug Enforcement Administration. In 2005 he introduced the first-ever federal bill to reauthorize hemp cultivation, eventually earning 11 co-sponsors before the bill died in committee. Undaunted, Paul rekindled the issue this year, filing the Industrial Hemp Farming Act of 2007. It may be an uphill battle, but for Paul that's well-traveled territory.

On May 11, Reefer Madness caught up with presidential candidate and hemp nut Ron Paul for a conversation about hemp, the power of the federal government, and the principle of peaceful commerce.

Reefer Madness: Great to talk with you. I know you're especially busy these days, so I appreciate your taking the time to talk with me about industrial hemp. You're the only one who has been, repeatedly, bringing this issue up, that we need to reauthorize industrial hemp farming.

Ron Paul: Isn't that amazing? That most people don't know about hemp?

RM: Well, I look at it as a real testament to the power of government propaganda.

RP: Yeah, there you go. I think you're right about the propaganda, and [it's also about] the prevailing education in this country, that we're taught things that are not true. I approach it in a different way – not as a "hemp issue." To me, it is a freedom issue – it is not a drug issue – it's a personal choice and is about the economics of a voluntary exchange that the government is interfering with arbitrarily. Their interference is a detriment, and [we're talking about] a totally peaceful thing! It's not negative, and it does so much. We complain about the balance of trade, and here's a product that can be used for lots of things, and out of ignorance we go out of our way to clamp down on it. This could be something to help the economy. Any kind of problem that we deal with, if there's no violence and there's no harm done, then it should be left to the people to decide.

RM: I agree. And in North Dakota, they've been trying for years to add hemp to their crop rotation. They are a very agrarian state – they have great knowledge about agriculture, and they want hemp, and yet they come up against a federal agency, the DEA, which has no agricultural expertise.

RP: That's another good point – where the [federal government has made the] problem more complicated, and complicated artificially, than if you're dealing with smaller [state] governments. This monolithic [federal] government makes mistakes. So North Dakota suffers, and no one else.

RM: That's a very Libertarian approach, and you've consistently applied that approach to this issue.

RP: I can make the same argument about medical marijuana. This is personal choice.

RM: It just seems so illogical.

RM: You're now running for president. Do you think you'll make this issue, of industrial hemp, part of your campaign?

RP: On Tuesday, Fox is running the debates, and that will be a bigger challenge to me – there are these Republicans who will say, "Let's embarrass Ron Paul, because he's got all these crazy Libertarian views." But I wouldn't be surprised if a drug-war question comes up. If a question comes up, I can very easily get into the insanity of letting a cancer patient die without allowing them access to medical marijuana and into the insanity of abolishing the right to grow hemp – an industrial product!

RM: I feel like we're giving all this lip service to the need to wean ourselves off a petroleum-based economy and to move toward a sustainable future, when there's this crop, hemp, right here that we know is sustainable and yet it's illegal. North Dakota just opened a new ethanol plant where they've built in the ability to process hemp into biofuel, and yet they can't do it. We say we need tools to build an environmentally conscious future, and yet we overlook one that is right in front of us.

RP: That is a good, practical argument to use. This is the whole point about the market argument. We subsidize corn and prohibit hemp – the market should determine this. If hemp is more efficient, then hemp would thrive.

RM: Well, that's a good point. We subsidize growing of some crops, and yet I understand, from talking with people in North Dakota, that they're concerned about the disease cycle that develops from planting the same crop rotation. They want to add hemp to the rotation to cut down on the disease cycle. But we won't allow that, so that may actually result in a greater reliance on government subsidy. It seems like a vicious cycle.

RP: Right, so we're giving government insurance to ruin the farm, and then [we're spending more money] bailing the farmers out.

RM: This is the second time that you've filed a bill to reauthorize hemp farming, and there are a growing number of states that want it; do you think we're getting to the critical mass needed to make hemp farming legal again? Are you optimistic about its passage?

RP: No, I'm not all that optimistic – if [lawmakers were] knowledgeable, it would be changed. It will take the education of the people to get Congress to change. It'd be nice if members of Congress looked into [the issue] on their own, but they're not going to, so in essence, it is up to the lobbyists, really. And there are so many other issues competing for attention, like the war.

RM: Do your colleagues even understand what hemp is?

RP: Some of them know, but they say it's too confusing, and they don't want their support [for hemp] to be construed as being "soft on drugs," and they don't want to put in the effort, and so it's easier for them just to vote "no." These are the same people that then lash off – they get a break, and they go and have their six-pack.

RM: Thanks for your time, congressman; I really appreciate it.

RP: Yeah, nice talking with you.