Is that green tint from pond scum? No, it's Daryl Slusher!

Former Austin Chronicle Politics Editor Daryl Slusher in his days on the City Council. Slusher has been hired as assistant director of environmental affairs and conservation for the Austin Water Utility. (Photo By Alan Pogue)

Can the Austin Water Utility – like its sister utility, Austin Energy – become a national model for energy efficiency, environmental protection, sustainability, and climate protection? City Manager Toby Futrell says she's determined to make that happen, and toward that goal, Futrell recently created a new position at the water utility: assistant director of environmental affairs and conservation. Then she hand-picked a strategic hire: former City Council Member and former Austin Chronicle News Editor Daryl Slusher, who'd been directing the Plug-in Partners National Campaign at Austin Energy. Futrell said she tapped Slusher because of his long track record of demonstrated passion and action on environmental issues – a passion she wants infused top-to-bottom into the water utility.

That would require a true sea change. Historically the water utility has not prioritized environmental protection or innovation. The result has been repeated problems with the environmental impact of water-utility projects – which have drawn fire from activists, the community, and the city's Environmental Board. Futrell, motivated to turn this around, pointed proudly to the fact that the city will spend more than $10 million to meet an exacting national certification process for the new $330 million Water Treatment Plant 4, ensuring that it meets high environmental standards. But a veteran employee pointed to entrenched attitudes at odds with those goals; he cited a recent comment by a lead engineer on the new plant, that "it's the damn tree huggers" who are making his job more difficult.

"The leadership hasn't been visionary – civil engineers are safe problem solvers, not visionaries," said the staffer, who requested anonymity in the interest of keeping his job. "The culture has stagnated for so long, no one has ever said 'innovate.' And environmental innovation hasn't even been on their radar."

The water utility hasn't hired excellent managers from outside, and it doesn't have smart human-resource practices, he noted; it loses some of its best field employees to Austin Energy, which offers higher, skill-based pay. "It's a culture that's created downtrodden, lackluster window-watchers – guys counting the days until they retire," the 15-year employee said. Another problem cited: Each plant is isolated and runs like its own fiefdom, and the people in charge like it that way. "Don't spend money" and "don't make waves" are the institutional mantras, said the staffer.

Given such deeply entrenched attitudes, is it realistic to expect an outsider like Slusher – who has no water-utility experience – to walk in and transform the department? Or is the notion all wet?

"What I need is a little nontraditional thinking, someone passionate and committed at the top, setting the standard," asserted Futrell. "It takes a person who could look at it upside down. Not coming in from the traditional linear perspective of the business."

She explained: "I have two major utilities in the city, one of which has become a national standard for environmental issues in their industry. A catalyst for that was a person [Roger Duncan, also a former council member] who went over there with a nonindustry, nontraditional perspective, who helped them think differently. It didn't happen overnight. But over time, and even against the typical business model, Austin Energy completely changed their way of thinking about their business. Now environmental thinking is ingrained at Austin Energy – and it was done while they remained profitable for the city."

The city manager's enviro-ambitions don't stop at the city limits: "Austin Energy is changing national policy, and that's what I'm looking to the water utility to start doing, in the long run," Futrell said.

"Those are big shoes to fill," said Slusher of Duncan and his innovations at Austin Energy. "But it's a good model." He added with a smile, "I'm really excited about this job! There's a lot that needs to be done, a lot of opportunity to improve things." In addition to reviewing day-to-day operations and capital improvements (such as new water and wastewater lines), his responsibilities include intergovernmental relations (state legislation, the federal Clean Water Partnership Program), wildlands preservation (like the Balcones Canyonlands Preserve), and promoting water conservation by the public.

"I'm already seeing that my hiring sent a signal internally, by the number of people who want to run things by me," Slusher said. He's found acting Austin Water Utility director Perwez Moheet supportive on environmental protection. On his very first day, Slusher was "thrown into deep water" on a controversy about the Zachary Scott Tract; the utility's plan to run a sewer line over Onion Creek (cheaper) rather than under the creek (better for the environment) had drawn fire from the city's Environmental Board and others. After a staff team (including Slusher) worked through the issues again, the utility reversed itself and recommended moving the sewer line underground.

Futrell emphasized that Slusher won't be going it alone – he's part of a new generation being hired to lead the water utility. "Over half of the executives have retired since I became city manager, and the rest could," Futrell said. "We're out on a national recruitment search right now for a new director and just hired two new assistant directors and are recruiting for others. Virtually a whole new management team is being reconstituted." Futrell said she's made environmental commitment a hiring criteria: "This is the perfect opportunity, as we're putting in place a new management team."

"It's going to take top-down policy changes, but it's also going to take an approved budget," cautioned the water-utility employee. "It can't just be goals – the city has to back it up with money." And citing key staff with low performance, low vision, and low standards, he opined that to truly transform the utility, "A new director's going to have a tough job. He's going to have to fire people."

Perhaps the best platform for institutional change is the newly launched Austin Climate Protection Plan, which requires that the water utility, like all other city departments, radically reduce its greenhouse-gas emissions. That requires improved energy efficiency and shifting to 100%-renewable-energy sources like wind and solar. The Austin Water Utility is the municipality's single-largest user of electricity. Pumping water is its biggest energy hog. A key way to reduce energy use and greenhouse-gas emissions, then, is water conservation; every gallon that doesn't have to be pumped and treated improves climate protection (and air quality, as well). "It's critical to the Austin Climate Protection Plan – it plays right to it," Futrell said.

A particularly destructive greenhouse gas created during wastewater sludge treatment is methane. Currently at Austin's two wastewater-treatment plants, methane is "flared off" to turn it into another greenhouse gas, carbon dioxide. (A Brazilian study team found that methane is about 21 times more powerful at warming the atmosphere than CO2; the U.S. Geological Survey states methane, pound for pound, has 10 times the global-warming effect of CO2.) Slusher said he's exploring the technical feasibility of using the methane as a renewable-energy source, to run electrical generators that could serve the plants and even "give back" to the grid. As a bonanza, the heat emitted by generators also could dry sludge, creating another energy efficiency.

If this initiative comes to pass, it indeed will signal change at the Austin Water Utility. The idea isn't new; for years, Austin Energy has tried to persuade the water utility to use its methane gas to generate on-site electricity, said a staffer familiar with the issue. But because the electric utility wouldn't pay for the methane, the water utility's staff wouldn't participate – environmental appeals didn't motivate them. A Chevron program to provide the needed generators (as an offset for the corporation's emissions elsewhere) could help to sweeten the deal.

Slusher's hiring on April 23 also dovetailed nicely with council's May 3 adoption of the Water Conservation Task Force recommendations, which council directed the city manager to implement. "I wish some of them were stronger, but I understand why they're not," said Slusher of the new measures. For example, he'd like to see submetering (to motivate individual apartment and condo households to lower their water bills) phased in more quickly. Over the next 10 years, the measures cumulatively should reduce peak water use by 1% annually, with ultimate savings of more than 32 million gallons on peak days.

Of course, conserving water requires not just municipal action but behavioral change from the water-wasting public. "We're going to need public buy-in and support for what we're doing," Slusher said. "Part of my job is to step back and take a broader look at how we're interacting with the public." Education, special campaigns, incentives, and rebates all could help Austinites get with the program.

What's one concrete step an ordinary Austinite can take this weekend to support the ACPP and water conservation? "I hate to start out talking about toilets," Slusher said with a laugh, "but one simple, immediate way is participating in our existing rebate program for low-flow toilets."

The same could be said of all Austinites. Do you hear your sprinkler running?

"Cool City" provides periodic updates on issues related to the Austin Climate Protection Plan. For background, or to comment on this column, see austinchronicle.com; for info on the low-flow-toilet rebate program and other water-saving incentives, see www.cityofaustin.org. A city Web page on the ACPP should go live soon. 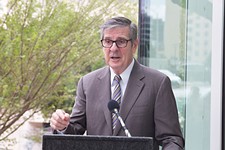