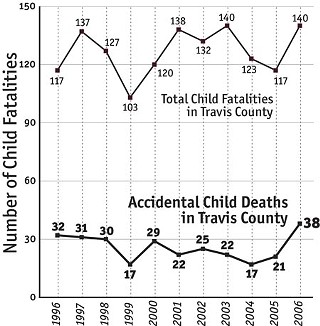 Late last month, the Travis County Child Fatality Review Team, a group of health and human services and public-safety community professionals, released its 11th annual report documenting the causes and trends of child deaths in the Austin area. The 2006 report, released by the Center for Child Protection, reflects some reasons for greater attention, if not alarm. Last year there were 140 child fatalities in Travis Co., a leap above the annual average of 127 and 20% more than the 117 child deaths reported in 2005. Moreover, 38 children in 2006 died from accidents – as many as the previous two years combined. (As in every year, the vast majority of child fatalities are the result of natural causes – 96 of 140 total – such as prematurity and congenital defects in very young children.)

One or two years might not mark a trend, but accidental child deaths have slowly declined over the last decade, so the sudden increase is troubling. These documented 2006 accidental deaths were the result of asphyxia/suffocation (17), motor-vehicle accidents (13), drowning (three), fire (one), gunshot wound (one), and other accidents (three).

This is the first year that motor-vehicle accidents have not been the primary cause of accidental child deaths. Of the 17 asphyxia/suffocation fatalities, seven were due to "overlays" (asphyxia caused by an adult or another child), nine were attributed to positional asphyxia (in relation to another object), and one was caused by choking. (All of these children, except for the 2-year-old choking victim, were less than a year old.)

Ten of the 13 motor-vehicle accident victims were 13-17 years old. None of the teen victims had consumed alcohol, but three of the fatalities involved alcohol-impaired adults. Eleven of the 13 vehicle deaths were Hispanic, while the remaining two were Anglo. The available information reflects that most of the victims were not properly restrained in a seat belt or car seat.

Two child fatalities were ruled homicides resulting from abuse, the lowest number in the past decade. Two teenage boys committed suicide last year, the same as in 2005.

*Oops! The following correction ran in the May 25, 2007 issue: In a May 18 News story on the Travis County Child Fatality Review Team's annual report on child deaths ("Child Fatality Report: Reasons for attention"), we identified Jay Trachtenberg as a former board member of the Center for Child Protection and a current volunteer. Trachtenberg is actually a former member of the Travis Co. Child Fatality Review Team and does not currently volunteer for the Center for Child Protection. We regret the error. 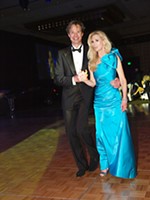 After a Fashion
Your Style Avatar neglected to mention your name, didn't he?

After a Fashion
Any friend of Edith Head, Algernon Moncrieff, and Vajazzling is a friend of Your Style Avatar