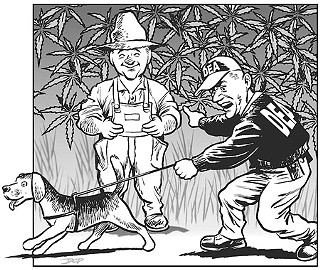 The growing season in the northern Midwest is fairly short. So a letter from the U.S. Drug Enforcement Agency describing all the reasons it's impossible to expedite the applications of two North Dakota farmers seeking federal approval to farm industrial hemp is, in effect, a refusal to allow farmers there the opportunity to cultivate hemp this year. And, if history is any indication, the letter also suggests it is unlikely the federal narcos will ever allow cultivation to happen – at least not without a fight. It is a fight North Dakota's farmers are ready for.

In February, North Dakota Agricultural Commissioner Roger Johnson traveled to Washington, D.C., to deliver to DEA officials two applications, filed by farmers who, pursuant to new state regulations, had been approved by Johnson to grow the nonnarcotic, environmentally friendly crop. Johnson also took along two separate checks given to him by the farmers – each for about $3,000 – to cover the DEA's yearly, nonrefundable hemp-licensing application fee. Since the growing season is already under way and there are no signs that the DEA has made any move toward reviewing the applications – including one filed by third-generation farmer and veteran Republican state Rep. David Monson – it appears the farmers have lost not only the chance to grow hemp this year but also the money they paid in an effort to gain approval. If they want to try again next year, they'll have to pay the fee – in other words, Johnson told us last month, the farmers coughed up the dough just to have the privilege to "fill out a piece of paper."

On March 28, Johnson's office received its most recent communiqué from the DEA, a two-page letter explaining why it would be impossible to reach a "final decision on the two applications to cultivate cannabis that you handed the agency" by April 1, the deadline Johnson requested. "Please understand that, as we explained during the … meeting, any application by a person seeking to become registered with the DEA to manufacture a controlled substance demands a careful and extensive review for DEA to meet its statutory and regulatory obligations," wrote Joseph T. Rannazzisi, deputy assistant administrator of the DEA's Office of Diversion Control. "The process necessarily involves steps that take a substantial time to complete." For example, the DEA must publish in the Federal Register a notice that the applications have been filed, must undertake a background investigation of the applicants, and must undertake a "field investigation" before deciding whether to give approval for the venture. Of course, since the substance in question in these two applications "is marijuana – the most widely abused controlled substance in the United States – the need for careful evaluation of the applicant's proposed security measures is paramount concern," wrote Rannazzisi. In sum, "it would be unrealistic (and unprecedented) to expect DEA to make a final decision on any application to manufacture any controlled substance within the timeframe you suggest – approximately seven weeks." Even more so, he wrote, since there are two applications to vet, "both of which seek to grow marijuana on a larger scale than any DEA registrant has ever been authorized to undertake."

In the end, Johnson says all involved with the state effort to reauthorize hemp farming were "disappointed but not surprised" by the DEA response – the agency is quick with a litany of reasons why it's unable to handle the request but doesn't offer any solution – nor does the letter suggest the officials have even begun putting the applications through the bloated process. Indeed, the Chronicle was unable to find any evidence that the agency had even posted the applications in the Federal Register, a move that, by its own account, is the first step in the process. Even more frustrating is the agency's repeated insistence that marijuana and hemp are the same thing – a fact the DEA says is not its doing but rather the reality of the federal Controlled Substances Act, which defines the various drugs over which DEA retains control. But that CSA definition is in dispute, since the 9th U.S. Circuit Court of Appeals actually differentiated between pot and hemp back in 2004 in a ruling that shot down the DEA's bid to outlaw all hemp-containing products – including both hemp food and body-care items (a ruling the government did not appeal). Johnson noted that in applying to the DEA, farmers are forced to check a box saying that they intend to grow marijuana, since there's no box marked "hemp." "They're treating it exactly as though it were marijuana, and it isn't," says Johnson, "and as long as they're doing that" it seems unlikely that farmers will be allowed to grow the sustainable crop. The DEA has only once approved an application to grow hemp (to a researcher in Hawaii), which has expired; an application filed by North Dakota State University researchers in 1999 is, technically, still pending.

Nonetheless, Johnson and the North Dakota Legislature are pressing forward. In April, lawmakers passed House Bill 1020, which amends the state's new hemp-farming rules to allow farmers to grow the crop without first getting permission from the feds. The change in law clearly raises the ante, though it leaves North Dakota farmers vulnerable to federal prosecution.

In other words, North Dakota officials are done playing the DEA's game. One way or another, it seems likely the battle over hemp cultivation there will play itself out in court. Although criminal court is a possibility, it seems more likely that at least one farmer – likely Monson – will file a civil suit first, challenging the agency's de facto hemp-farming ban. Monson says that legalized hemp-farming is "inevitable, but if it's going to happen more quickly" it's going to have to happen in court. Indeed, says Johnson, a public court fight appears to be the only viable option left. "The way I look at this, [it] is very much a long-term issue that will take time to sort out, and the DEA is just a little slow at coming to the place we want, and we'll stay at it until they come around," Johnson said. "I expect somebody is going to sue them."