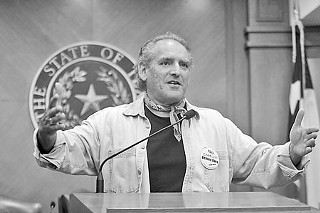 Free the Children's Jay Johnson-Castro speaking out against the Hutto Center at the Capital. (Photo By Jana Birchum)

Monday was the day that 2006 Nobel Peace Prize nominee and U.N. "rapporteur" (investigator) Jorge Bustamante was to have visited the T. Don Hutto Residential Center in Taylor, the big house of increasingly ill repute owned and operated by Corrections Corporation of America, which does a booming business – about $35 million a year – imprisoning immigrant families, including children. Bustamante had planned to inspect TDH as part of his three-week fact-finding mission regarding migrant living conditions, then present his results to the United Nations General Assembly in June. The U.S. Department of Homeland Security clanged TDH's door shut on Bustamante at the last minute, however.

The Associated Press quoted a U.S. Immigration and Customs Enforcement spokeswoman last Thursday as saying the visit was never approved, though Bustamante told News 8 Austin on Monday that Homeland Security had actually invited him to tour TDH. According to State Department spokesman Bill Strassberger, "The U.S. State Department facilitated the visit of Jorge Bustamante. ICE made the decision to deny access because the[y] are participating in litigation at the Hutto facility. … Yesterday, ICE invited Bustamante to tour the Berks County, PA., detention facility as a replacement." The government's fortress mentality may have backfired, however, for a contingency of media and protesters descended upon the area anyway, to probe even harder the reason for all the secrecy. Free the Children, a coalition of local and state activists formed to protest the Hutto child jailings, held an all-day vigil outside the facility. "What if we could surround this hellhole [with protesters]? We could shut this place down!" said FTC spokesman and border activist Jay Johnson-Castro. Barring Bustamante's inspection, Johnson-Castro said, "more than amply exposes the epitome of Texas corruption." His group is tracking more than $60,000 in campaign contributions by CCA to legislators, who in turn promote private, for-profit prisons.

Early in the controversy, critics had difficulty convincing nonbelievers that babies, toddlers, and teens were actually doing time in Texas, but no more. The turning point in detainees' having access to the outside world occurred early in 2007, when the American Civil Liberties Union filed suit against DHS and ICE on behalf of 10 immigrant children confined at TDH. In the course of the lawsuit, the ACLU has documented several cases. A film just released on the ACLU Web site shows a mother stating that confinement at Hutto was a "psychological trauma" from which she and her daughter will never recover. "It was really horrible, and if you'll excuse me, I'd rather not reflect on it," her young daughter says.

Free the Children recently held a "citizens' public hearing" at the Capitol to protest the Legislature's inaction on House Concurrent Resolution 64 – authored by Rep. Eddie Rodriguez, D-Austin – which calls on the federal government to seek alternatives to family detention for immigration charges. At the hearing, FTC presented alarming findings – for example, that women taken from TDH to hospitals for prenatal visits have been blindfolded and restrained during exams. Member Cynthia Valadez said workers "on the inside" are afraid to report abuse because they believe they would lose their jobs. FTC is demanding that HCR 64 be provided public hearings "so all our elected leaders can take a stand on this issue," said Johnson-Castro, who also noted that keeping a toddler behind bars at TDH reportedly costs taxpayers almost $100,000 per year. For that price, "We could put them up at the Omni," he said.

The reality of child imprisonment in their own back yard reportedly caught the new Williamson Co. Commissioners Court off-guard, but that didn't stop them from voting in early 2007 to keep TDH open, possibly because the deal brings hundreds of thousands of dollars a year to the county. Is there any excuse, however, for not knowing their predecessors willfully signed the pact that disingenuously changed the purpose and name of the facility?

Taking effect May 1, 2006, a modification to the agreement between ICE and WilCo stated that TDH would "provide detention services for non-criminal alien families" and that the "name of the facility will be changed from T. Don Hutto Correctional Center to T. Don Hutto Residential Center." Despite the official euphemism, the contract itself is frank: Detainees are "inmates," a guard service employed by WilCo may transport inmates to "unspecified, miscellaneous locations," and detainees shall not be released without ICE's permission.

If the word "child" is subbed for "detainee," the effect is chilling. And the high fences are still there. A Taylor resident and FTC member, Angela Kopit, whose family is Jewish, said the sight of railroad tracks, on which the facility is built, is a "horrific image," reminding her of "Nazis' boxcars."

In response to the mounting controversy, DHS officials hosted an "open house" this spring, but media and officials were allowed to see only what DHS and ICE wanted them to see – pizza and plastic plants but no detainees. Afterward, U.S. Rep. John Carter pronounced the facility "humane," insisting the policy protects children from human traffickers. But Homeland Security Secretary Michael Chertoff revealed a less flowery attitude toward detainees on Aug. 23, 2006, in a statement trumpeting the new catch-and-remove policy: "Word has gotten out to people from countries other than Mexico that they will not be released, [that] there's really a change in the incentive process that was previously drawing them in."

Yet, for most detainees, many of whom are seeking asylum from torture and repression in their home countries, the real incentive is to be free. According to the summary of the ACLU lawsuit against TDH, many of the detained families "have fled persecution, war, and devastation. Many … have been found by trained asylum officers to have credible fears of persecution."