With two weeks left, the 80th runs into foul weather 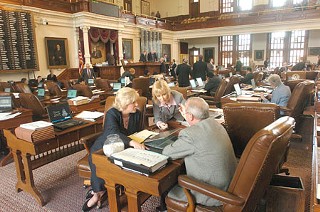 If Monday night's hailstorm in the House can serve as a long-range forecast, look for significant wind shifts and high damage potential in the final two weeks of the 80th session. Although nearly every session enters a period of freak weather in the waning days, even jaded Capitol observers acknowledge that the 2007 session is not your garden-variety get-together. On top of that, there's no telling what the $150 billion state budget will look like in its final form, particularly given the unusual political challenges in play for the commanders in both chambers.

In the Senate, Lt. Gov. David Dewhurst is eyeing a run for governor in 2010 and as a consequence has taken to calculating his every move, while drawing heat from those who just want to get their dang bills passed. "See Dewhurst Run," is how some folks have titled the session.

The House, meanwhile, is in a state of barely controlled chaos. The chamber reached a boiling point late Monday night as Speaker Tom Craddick was dealt a withering blow by his own members, who voted 87-50 to rein in his heavy-handedness. Specifically, they voted dramatically to override Craddick's rejection of a procedural motion; longtime Lege observers said they hadn't seen a similar override in a generation. The mutiny, which had been building over the past two weeks, cast doubt on Craddick's ability to lead the House henceforward. But the rebelliousness actually dates from the beginning of the session, when Craddick survived a GOP challenge to his leadership but vowed not to retaliate against the 68 members who effectively voted against his re-election by voting (and failing) to choose a new speaker by secret ballot.

But Craddick's old habits are apparently hard to break, and there's been much grumbling from Craddick opponents that their bills have been subject to various forms of procedural sabotage. In response, House members – particularly those who voted for Craddick – are starting to exert some independence.

It flowered Monday night. The breaking point came when Craddick summarily dismissed a point of order raised by Houston Democrat Senfronia Thompson. The question concerned a local bill carried by Valley Democrat Ryan Guillen that mysteriously turned up on the major state calendar – a move not normally permitted under House rules, especially in a session when other members' local bills (the meat and potatoes of constituent service) have languished unheard for weeks. As the members saw it, the calendar switch clearly violated procedural bounds to help Guillen (a Craddick D) secure passage of his very important bill – to Zapata County exclusively. After Thompson was overruled on her objection, Republicans Robert Talton and Charlie Geren rose to challenge Craddick and urged all members to vote to uphold the House rules. Talton, an arch- but unpredictably maverick conservative from Pasadena, is enjoying his new prominence as the House point man on points of order – using the House rules to derail controversial bills. In addition to his inveterate contrariness, it's also his way of showing his displeasure with the speaker, the man he tried to oust at the beginning of the session.

Before casting his vote against the speaker, Georgetown rep and Craddick loyalist Dan Gattis bemoaned the political tension between members. "I think what got us here tonight is not a speaker not willing to follow the rules but how to deal with members who are at one another's throats. We're worn out. This has not been a fun session for me," he said, "and as I talk to other members, they say the same thing."

Earlier Monday, House Democratic leader Garnet Coleman said that while the House lacks leadership – "I don't call coercion leadership" – more Craddick soldiers are starting to emerge from the trenches. "Members who have not had the courage to vote their districts are now starting to do so," he said. On the downside, Craddick is still exercising pressure behind the scenes. "He's taken it underground," Coleman said. "His tone is better, but that doesn't change the process."

In previous sessions, when Craddick's authority (and large GOP majority) was unquestioned, complaints went not only unheard but unspoken – on penalty of political exile. This year's free-range squabbling is a double-edged sword. Quipped one longtime lobbyist (anonymous for obvious reasons): "When Saddam was head of Iraq, there was no freedom, but the government worked. When Craddick ruled with an iron hand, it was not democratic, but things got done."

And Mussolini made the trains run on time.

Setting aside the Dewhurst-Craddick dynamics (or under their imposing shadow) – what has the 80th managed to accomplish thus far?

Both chambers cheerfully passed two major rebukes of Gov. Rick Perry. They first overturned his mandate to vaccinate sixth-grade girls against human papillomavirus (a sexually transmitted disease that can lead to cervical cancer). Perry could have vetoed the bill but instead let it become law without his signature. In announcing his decision Tuesday, he acknowledged defeat and claimed victory. Perry lambasted legislators for caring more about asserting their power than about women's health care. "Banning widespread access to a vaccine that can prevent cancer is shortsighted policy," the guv declared. The second impertinent bill, which arrived on Perry's desk this week, seeks to hobble his prized Trans-Texas Corridor initiative with a two-year moratorium on toll-road construction by private contractors. Perry has until May 18 to veto the bill – but the votes in both houses are apparently available to override him.

In other achievements, at least for the lite guv, legislators passed Jessica's Law, which would send twice-convicted child molesters (an extremely rare breed) to death row – and perhaps send Dewhurst to the governor's office. "That's the highlight of his agenda," sardonically noted one lobbyist.

On a meatier scale, here's a brief rundown of what lawmakers have either passed or are likely to pass:

• A far-reaching overhaul of the scandalously dysfunctional Texas Youth Commission.

• A homeland security bill, which cleared the Senate and passed the House overwhelmingly on its first reading Monday but hit a rough patch Tuesday on second reading before sailing through on a unanimous vote. (Speaking of rough patches, anti-immigrant backbencher Rep. Leo Berman, R-Tyler, threw sand on State Affairs Chairman David Swinford's moment of glory – he was roundly applauded Monday after surviving the grueling process of negotiating the homeland security bill through the House. The irascible Berman, in a personal privilege speech, complained that the bill is only "half a bill" because it doesn't address his and his East Texas constituents' problem with "illegal aliens." He ranted at length that border-crossing immigrants spread disease and burden the health-care and education systems, at taxpayers' [read: "white people's"] expense. The speech provoked El Paso Dem Paul Moreno – the only rep of longer seniority than Craddick himself – to take the floor the next day to defend the Texas history traditions of Mexican-Americans and to excoriate the pejorative term "illegal aliens.")

• Until last week, the Senate was sitting on a health-care bill that would remove some roadblocks in the Children's Health Insurance Program. The sticking point was Dewhurst's opposition to changing the program's renewal requirements from twice to once a year. Over the weekend, he changed his tune, following statewide headlines that because of the regulation, more than 17,000 children had been dropped from CHIP rolls last month. (Often denounced as a "welfare program," most CHIP beneficiaries are in fact middle-income families who can't otherwise afford insurance; Dewhurst is well aware that gutting CHIP does not impress most voters.)

• Still uncertain is a high-voltage voter-ID bill that passed in the House but could face defeat in the Senate if the 11 Democrats hang together and block the bill from consideration, and if the Republicans don't employ a parliamentary dodge. Dewhurst insists he wants to get this one through, which might require one Democrat to flip. (All eyes are on Brownsville's Eddie Lucio as the likeliest suspect.)

One thing that must pass, for better or worse, is the biennial budget. What's making Democrats nervous is the extra cash that the Senate set aside and the House never appropriated. Out of the blue, Perry recently proposed another property tax cut, even as the state faces the prospect of a budget shortage in the next few years – a direct result of last year's $14.2 billion property tax cut. Dewhurst may be the Dem's hole card for fiscal responsibility; the Houston Chronicle's Clay Robison reported last week that Dewhurst wants to avoid getting hit with a budget shortfall in 2009, just as he's trying to mount a high-stakes campaign for governor.

In the short term, Dewhurst's political aspirations have little value to legislators, who are more personally concerned about getting their own bills passed before the clock runs out May 28, and they return home to their districts to plan their own campaigns. Coleman is not alone in his belief that the worst is yet to come, with the usual targets – public benefits and education – taking additional hits. "We're going to see a lot more tax cutting, a lot more Bible thumping, and a lot more money going to people's friends and contributors. That's what's important to this group of people," he said. "The rest of the stuff is poetry."

The following boxes summarize the issues.