Jim Crow Gets a Vote 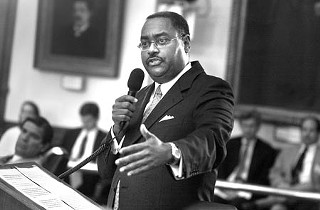 Sen. Rodney Ellis has vowed that the Senate's 11 Democrats will block any voter-ID bills from coming to the floor. (Photo By John Anderson)

Election day calamities – technical glitches, human errors, hanging chads – do happen, often enough to affect the vote and embarrass the republic. One might think that it would be an appointed task of elected officials to address those widespread voting problems that are all too common and readily visible. Instead, Texas Republican leaders, with the active promotion of the national GOP (see the Gonzales/Rove federal attorneys' scandal), have concocted another, much more phantom malady that they nevertheless claim threatens to drive the system to ruin. So this session, as in the last, they are seeking to curb what they insist is a growing national problem of noncitizens voting illegally.

Democrats respond that the problem is all in Republicans' heads.

In the past two weeks, the House has passed two "Voter ID" bills, and one of them cleared a Senate committee on Monday. The House passed the second one on Tuesday night, this one requiring the Secretary of State's Office to verify the citizenship of new voter registrants. House Democratic leader Jim Dunnam, in an impassioned floor speech before the vote, denounced the stepped-up requirement as "just more sophisticated Jim Crow."

Stiffer voting laws have either passed or are under consideration in several other GOP-controlled states. Democrats and voting-rights activists charge that the Republican Party is pursuing a mission to block minority participation in the voting process. Proponents deny ulterior motives, insisting they merely want to protect the voting rights of citizens.

The Senate State Affairs Committee heard testimony to that effect Monday during a hearing on House Bill 218, an equally controversial voter-ID bill that the House narrowly approved last week, that would require a government-issued ID to vote. As in the House debate, supporters argued it would end the (invisible) plague of voter impersonation; opponents described it as a transparent attempt to suppress voting by the poor, minorities, and elderly (who just happen to trend Dem). The Senate version of the bill passed on a 4-3 party-line vote.

Before the vote, Houston Sen. Rodney Ellis, one of the three D's on the State Affairs Committee, asked a representative of the Secretary of State's Office for the number of voter-impersonation complaints that have been filed with the agency. "We have not had any," elections director Ann McGeehan replied. "Have you had discussions about any political initiatives to try to deal with this perceived problem?" Ellis wondered. No, McGeehan replied. "The focus of our office for the last two years has been the implementation of the [Help America Vote Act]," she said in reference to the 2002 federal law directing states to upgrade their voting systems and eliminate the punch-card voting method. "So you all have been focusing on helping Americans to vote, not keeping them from voting," Ellis observed wryly. "I see."

In testimony, Austin attorney and election pro Buck Wood said he's handled about 50 contested election cases but has never come across evidence of voter impersonation. "This bill is based on a false premise," he said. "We would never take up a bill to regulate an industry without having some solid proof that the regulation was needed."

Arguments favoring the bill were less compelling. Skipper Wallace of the Republican County Chairmen's Association told the committee that a voter-ID law would make the election process "more honest and above-board." When Sen. Leticia Van de Putte, D-San Antonio, pointed out that other states saw a decrease in voter turnout after enacting a voter-ID bill, Wallace responded that the drop could simply mean "we don't have the fraud anymore." Another proponent, Rebecca Forest of the Immigration Reform Coalition of Texas, noted that "even in Mexico," voters are required to show a form of ID at the polls. "If a poor country, poorer than the United States, can do that, we would request that the same policies be followed here," she said. She went on, "There are instances in the northern states where Middle Easterners are voting illegally, so it's not only in the Latin American states."

Prospectively, HB 218 creates some interesting dynamics in the Senate, where a similar bill died in the 2005 session. Lt. Gov. David Dewhurst, a likely gubernatorial candidate in 2010, has committed to pass the bill, while Ellis has vowed to block debate on the legislation, assuming the 11 Democratic senators hang tight in opposition. As he did for re-redistricting – with much collateral damage – Dewhurst could waive the Senate's two-thirds voting rule for bringing bills to the floor. And in the event either HB 626 or HB 218 fails in the Senate, there's always the possibility that they'll be revived as riders to other legislation and come to the Senate floor by that route.

Tuesday in the House, both sides spent the day trying to broker a compromise on HB 626, which in its original form would have required new voter registrants to produce documented proof of citizenship. Bill sponsor Rep. Phil King of Weatherford agreed to shift the burden of proof to the Secretary of State's Office, but Democrats argued the agency doesn't have a mechanism in place to check citizenship. An agency spokesman told the Austin American-Statesman that indeed the agency does not have such a system but added, "We'll find a way to make it happen."

Earlier Tuesday, Austin Democrat Mark Strama commended King for his willingness to negotiate with opponents. "I think he listened to the testimony [in last week's debate on HB 218], he heard our concerns, and he's gone a long way to try to figure out a way to make this work," he said. The question is whether this is feasible for the secretary of state."