How mentally ill does a prisoner have to be in order to deem execution cruel and unusual punishment?

The U.S. Supreme Court on April 18 heard arguments in the case of condemned Texas prisoner Scott Panetti, a case that asks the high court exactly how mentally ill a prisoner has to be in order to invalidate execution on the grounds of cruel and unusual punishment.

Panetti was convicted and sentenced to die for the 1992 murders of his in-laws, Joe and Amanda Alvarado, at their Fredericksburg home. Panetti has a long history of mental illness and had been hospitalized at least 11 times – indeed, he was released from his last hospitalization just two months before the Alvarado killings, and when he turned himself in to police, confessed that the real killer was "Sarge," in fact a recurring auditory hallucination. Panetti was medicated for schizophrenia during a competency hearing, after which he was cleared as able to stand trial for the crime. Thereafter, however, he went off his meds and endeavored to defend himself, which the judge allowed; at trial, Panetti dressed in a purple cowboy suit, filed a host of rambling motions, and sought to subpoena as witnesses John F. Kennedy, Jesus Christ, and Anne Bancroft. He was ultimately found guilty and sentenced to death.

Since his conviction, the question has become whether Panetti, so clearly suffering from schizophrenic delusion, is sane enough to be executed or whether to do so would violate the constitutional ban on cruel and unusual punishment. In 2004, U.S. District Judge Sam Sparks ruled that while Panetti is in fact mentally ill, and that although there remains some question as to whether he understands the connection between his crime and the punishment, the law – as currently interpreted by the 5th U.S. Circuit Court of Appeals – does not bar his execution. The 5th Circuit ultimately agreed that Panetti could be executed, prompting his lawyers – including Austin attorney Keith Hampton and Texas Defender Service attorney Greg Wiercioch – to appeal to the Supremes for intervention.

The state maintains that Panetti is "aware" of the connection between his committing the crime and that for that he will be put to death. And that, the Texas Attorney General's Office argues, is all that is required to pass constitutional muster. The "court's fact findings demonstrate conclusively that Panetti meets the appropriate test for competency to be executed," Texas Solicitor General Ted Cruz told the high court. "The district court found that Panetti … knows that he murdered two people. [And] he understands that he is going to be put to death." Indeed, Panetti grasps those two plain facts, but he also believes that the state is merely using the murders as a pretense for its real motive for killing him: keeping him from "preaching the gospel" to his fellow inmates. His defenders assert that simply knowing he committed a crime and knowing he'll be executed is not enough – instead, they assert, the law requires that he rationally understand the connection between the two and that to say otherwise is a "profound misreading" of the law, Wiercioch told the court. For example, says Hampton, if merely being aware of the connection were enough, then it wouldn't be necessary to have teams of psychiatric experts evaluate a person's mental capacity. Indeed, if the connection were so obvious, it would be enough to have, say, a prison guard walk by the cell and yell out, "Hey, Panetti, you know they're going to execute you for those two murders?" Hampton said. Under the state's theory of mental competency, then, that would suffice.

But it's unclear whether the Supremes will actually hand down an opinion that clarifies when a person is sane enough to be executed. A significant portion of last week's oral argument was dedicated to the different, yet equally fundamental, question of whether the court even has standing to take the case. The dispute concerns the painfully complex federal statute that controls death-penalty appeals. Cruz argued that Panetti's appeal violates that law, in part because he never before raised the issue that he would be too ill to execute – even though having done so prior to his receiving an actual execution date would have been "unripe" and, likely, considered frivolous. As Wiercioch put it, the appeal is not an abuse of law, in part because the "constitutional violation [argued] here is forward-looking, unlike most constitutional habeas claims that are backward-looking."

A decision is expected this summer. 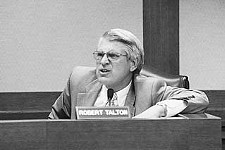