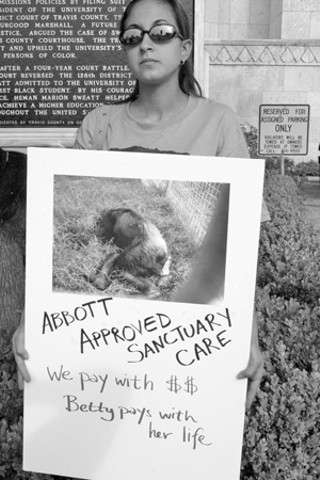 The Downtown enclosure was rife with squawking, grunting, and righteously noisy posturing as lawyers representing warring factions in a bitter dispute over the operation of Primarily Primates Inc. – the San Antonio-based sanctuary that is home to 250 primates and numerous other animals, assembled for a final battle – squared off over the conditions of a settlement reached between Texas Attorney General Greg Abbott and the board and management of PPI, from whom the state wrested control of the facility last fall.

In a petition for a temporary restraining order filed in October – seeking the ouster of PPI's management, including the entire board of directors, sanctuary founder and longtime director Wallace Swett, and newly appointed director Stephen Tello, as well as the appointment of a temporary receiver, wildlife rehabilitator Lee Theisen-Watt – Texas Assistant Attorney General Ted Ross, of the agency's Charitable Trusts Section, argued that the nonprofit PPI had long mismanaged its donated funds, to the detriment of its large population of primates and other rescued animals (among them 63 chimpanzees, rescued or "retired" from the entertainment industry, space, or medical-research projects). The litany of allegations suggested PPI was guilty of serious animal neglect: The sanctuary's wards had long been denied even adequate food, shelter, and care, the AG charged. There was no veterinarian on site; the primates subsisted on monkey chow; they were housed in barren concrete enclosures that could not easily be cleaned and hadn't been, leading to dangerous accumulations of excrement and extreme infestations of both rodents and roaches.

Herman granted the AG's request and installed Theisen-Watt as receiver. This summer, a jury will determine the facts of the situation and decide whether or not PPI's leaders should be permanently removed from their posts.

But late on April 25, news spread that a settlement had been reached and that the AG's office was ready to dismiss its suit. Under the terms of the agreement ratified Friday, Swett is permanently barred from any involvement with PPI, Tello will be reinstalled as manager of day-to-day operations, and the board will be reformed – to include Priscilla Feral, head of the 50-year-old Connecticut-based animal-advocacy group Friends of Animals, which is a fierce supporter of PPI and instrumental in bankrolling the defense, and Eric Turton, one of the lawyers she hired to defend PPI against the AG. The AG's office will continue to monitor conditions at the sanctuary, retaining the right to conduct random, unannounced inspections, Paul Carmona, director of the AG's Consumer Protection and Public Health Section, told Judge Herman last week. In all, Carmona said, the AG's office has done what it intended to do and therefore does not need to pursue legal action against PPI.

Indeed, under Theisen-Watt's control, the deplorable conditions at PPI were largely fixed or are being fixed. The AG is satisfied things will now be much better and was ready to have Theisen-Watt abruptly turn over control of the facility to Feral et al. at 4pm on Tuesday, May 1. That legal transfer occurred as planned.

To Theisen-Watt, news of the settlement was devastating: In her estimation – and in that of a diverse group of supporters who quickly rallied, writing letters imploring Herman to block the deal (many sent directly to the court, an impropriety that infuriated Herman) – the AG's decision to return control of the facility to many of the same people charged with creating the poor conditions is a moral and ethical outrage. Instead of standing up and fighting to the end, as Theisen-Watt sees it, the AG has simply buckled, washing its hands of any responsibility to ensure that the public trust is maintained and that the animals in PPI's care are not subjected to a miserable existence. "It sends a horrific message from the government to the public, that they will let this happen," she told the Chronicle.

The legal battle for control of the sanctuary has been tense, often devolving into inflammatory and undocumented personal attacks, including Feral and Tello's assertions that the whole takeover of PPI was orchestrated by the controversial animal-rights group People for the Ethical Treatment of Animals. Feral, Tello, and their lawyers have asserted that PETA initially complained to the AG because it was interested in taking over PPI not to improve conditions but in order to "liquidate" the sanctuary's assets – that is, to euthanize the animals, on the principle that death is preferable to life in a cage (PPI supporters dubbed Theisen-Watt "Lethal Lee"). While national PETA officials have at times made such theoretical statements, there is no evidence to suggest such a motive at work in this case. That hasn't kept Feral and Tello's lawyers – notably, Austin attorney Ray Chester – from ranting in court that the assault on PPI has been orchestrated and "funded by PETA," as Chester shrilly asserted in court last week. "Their lawyers are here today!"

This level of emotion turned what should have been a brief hearing into a nearly three-hour marathon, with Theisen-Watt's lawyer, Bill Parrish, attempting to block the deal. He argued that the AG's office was merely "tucking tail" and running (perhaps because it felt outgunned by Feral's legal team, he suggested), relinquishing control over the facility and thereby dooming the animals. In short, the "settlement has no teeth in it," Parrish argued. "Based on this settlement agreement," he said, "no one is looking out for the animals."

This isn't the first time the AG's charitable trust section has been accused of shying away from a complicated and heated dispute. "It's been my experience that they start out with tremendous effort and publicity, and as the case goes on, they're less inclined to be involved," said Arlington attorney Don Feare, who is an expert in animal law and has dealt with the AG's Charitable Trust Section on other animal cases – significantly, as a court-appointed receiver – and is a member of the state bar's Animal Law Section. "They start out with the indignation they should have, and then it's like a train running out of steam – and that does the animals no good whatsoever."

Herman ultimately approved the settlement, ruling that court-appointed receiver Theisen-Watt had no standing to block it – though he did have a few pointed questions for Carmona, emphasizing that the AG's Office has a duty to ensure that PPI's animals are treated humanely. "I've seen the pictures" of the living conditions at PPI, Herman said, and it "doesn't take any specific skill set" to see that conditions were, at best, substandard. "Are you going to go down [there] in the next few days to see what it's like now so that two months down [the road] you'll know [if things are] in heavy decline?" he asked.

"I think it would behoove the AG to go down there fairly soon," Herman said sternly. At press time, Carmona had not yet visited the sanctuary. 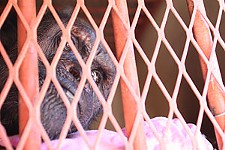 Famous Long Ago
Legendary "Humanzee" Oliver, his friends, and the bitter fight over animal welfare at a Texas refuge