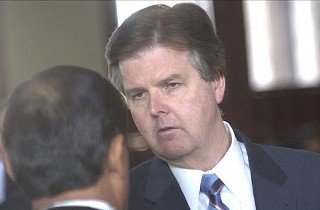 How did Sen. Dan Patrick become the focus of continuing press coverage of the first Islamic prayer to be delivered in the Texas Senate?

In his written response to our photo caption of the Muslim cleric who made history in the Senate April 4 ("Naked City," April 13), Patrick seems somewhat surprised that he was singled out in news reports of the historic prayer, a highlight of the third Texas Muslims Legislative Day, which included an interfaith workshop at the Capitol.

How did the media-savvy radio personality steal the spotlight? Patrick was the only senator to share with other members his strong objections to the imam, who delivered the invocation at the invitation of Sen. Florence Shapiro, who is Jewish. According to news reports, Patrick also suggested to members that the imam – Yusuf Kavakci of the Dallas Central Mosque – shared the views of a radical Muslim sect (Wahhabism), although Kavakci has publicly rejected those views. And Patrick was the only member to make a personal privilege speech at the end of the day's session, noting that the Islamic prayer he had boycotted that morning was an "extraordinary moment." He went on to say, "We are a nation that is so tolerant of others that we bend over backward to allow others to pray as they wish. … We are a nation that allows a Muslim to come in with a Quran, but we are a nation that doesn't allow a Christian to take a Bible to school." (We wanted to ask Patrick what federal or state law prohibits Christians from carrying Bibles in school, but at press time, he had not responded to calls to his office seeking comment.)

Shapiro, in thanking the imam, made a veiled reference to Patrick as the only senator not on the floor during the prayer. Patrick, in his response to the Chronicle's Web site (see "Patrick and Pals" below), noted that he was one of seven senators who were apparently not in the chamber during that "extraordinary moment." One of those was Troy Fraser of Horseshoe Bay, but that was only because his wife had taken ill and he arrived late to work that day. "He was off the floor during the prayer, but it was not intentional," spokesman Daniel Womack said of his boss' temporary absence, though he did add that Fraser thought it a "poor choice" for the imam to deliver the Senate's last prayer before the Easter break. (Shapiro told reporters that of her 30 colleagues, Patrick was the only senator who objected to Kavakci, warning her that he is "not who I thought he was.")

Patrick and his followers had one other quarrel with the Chronicle: The photo caption said Patrick "subscribes to the views of an extremist Christian sect." That was a clumsy way of pointing out Patrick's sanctimonious use of his personal version of Christianity to promote a legislative agenda that is weighted heavily toward exclusion and intolerance, particularly in his anti-immigrant positions – and now in his personal declaration that he worships a different god from people of other faiths.

While Patrick and his band of supporters are still churning the press coverage of the senator's scene-stealing moment, Shapiro is through talking about the whole affair. "She commented on it two weeks ago," said aide Jennifer Ransom Rice, "and she has nothing more to say."

Sen. Dan Patrick, R-Houston, is apparently annoyed with us and indeed with all Texas media. In response to our April 13 report that he had left the Senate floor rather than be present during a prayer led by Dallas Imam Yusuf Kavakci, Patrick posted an online comment. (We believe the posting is legitimate, but at press time Patrick's office had not responded to a call requesting verification and comment.) In it, Patrick claims that he was not the only senator boycotting the Muslim prayer and that, while he is not disrespectful of Islam, as a "Southern Baptist," he worships a different god. (That would be news to most Muslims and Jews, not to mention religious scholars.)

In his day job, Patrick is a Houston radio talk-show host and apparently complained of our coverage, including that of staff writer Amy Smith, to his radio audience. Several responded with e-mails addressed to Smith; we excerpt a sample below. – Michael King

The following responses and excerpts have not been edited for spelling or grammar.

"I am not anti Muslim"

I was sent your quote of the week. The problem is it is wrong. The media has totally misreported the story. I was not the only senator off the floor. One third of the republicans were not on the floor for the prayer. Senator Troy Frazier gave me permission to share that he was one who decided to stay in his office. I assumed the media noticed the 7 empty desks and would report the facts. For some reason the media focused only on me.

I don't blame Senator Shapiro for the statement. Someone gave her bad information. I think some of the media wrote the story based on that quote but never verified it. I have great respect for her. She was one of the first to support my resolution to place In God We Trust in the senate.

I am not anti Muslim or anti Islam. I was not trying to be disrepectful. I did have some concerns, but I skipped the prayer simply because as a Christian, praying to another God would violate the first commandment. I made it clear in my floor remarks that I am glad to live in a country where everyone can pray as they choose. But I have a right not to participate if I feel my faith is compromised. If we had a Muslim senator and he or she felt a Christian prayer would compromize their faith and stayed off the floor, I would respect that decision as well. As far as that "extreme sect" mentioned in the post, it is called the Baptist faith. I'm Baptist. I don't think most Texans consider that an extreme religion.

Frankly I'm not surprised at the hypocrisy, the profession of journalism has been working at eliminating the voice and culture of Jesus Christ's followers for the past 100 plus years and will accept any aid from any corner it can, as long as its anti-Christ agenda is advanced.

I hope you paid attention to that prayer Ms. Smith. Because if Muslim's take power in the US, at some point you (or your children) will convert … or die. – Mark Queen

Why is it that Christian prayers can be "snubbed" or "ignored" or even outlawed but it isn't PC to ignore or not participate in a Muslim prayer (you know a prayer by someone who wants to kill us).

I guess going to Bible studies, attending church and worshiping God must be extreme to you. Get a grip lady.

As Christians, we are to worship only the one true God of the Bible (Luke 4:8) and deny all other gods, even pagan gods such as alah from the religion Islam. …

Are you a relativist and all things are right depending on the one determining it? If so, is it right for me to marry a toaster oven if my spiritual beliefs say it is okay? – Pat Flanakin