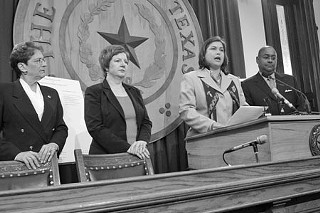 At a press conference on Monday, several Democratic representatives, including (l-r) Emily Cohen, Valinda Bolton, Jessica Farrar, and Rodney Ellis, demanded that the privately run but publicly funded Crisis Pregnancy Centers be forced to submit to some sort of government oversight. (Photo By Jana Birchum)

In the world of family-planning and reproductive rights, it's been business as usual at the 80th Legislature: The agenda is schizophrenic and often steeped in hypocrisy. Concerning sex – and, most specifically, concerning the idea that a woman should be free to control her own reproductive life – most legislative debates drift into unhinged ideological fanaticism.

Consider the perennial quest to define "life" as the magical moment at which sperm meets egg. This year, that definition has found its way into House Bill 175, the so-called "trigger bill" filed by Rep. Warren Chisum, R-Pampa, which would ban all abortion in Texas (unless the mother would otherwise die), if the U.S. Supreme Court ever decides to reverse Roe v. Wade. The point of the bill, says Kathi Seay, spokeswoman for Rep. Frank "the Fetus" Corte, is to demonstrate that Texans are committed to upholding the sanctity of life. (Chisum agreed to carry the bill, but Corte's office is fielding all questions about it.) While Chisum, Corte, and similar-minded lawmakers champion the rights owed the unborn, they nonetheless fail to support the kinds of programs and policies – like the Children's Health Insurance Program – that might better demonstrate real concern for the living.

To hear Seay tell it, HB 175 does reflect real compassion: "Now, access to health care is a fine thing," she says, but "the point is, how a society treats life really matters and spills out into other issues." Some might think that unplanned pregnancies leading to unwanted children might correlate to the relative incidence of child abuse; Seay counters that abortion "devalues" life, which is what truly leads to child abuse and other social ills. Before Roe, none of our current social problems existed – end abortion, she says, and those problems will disappear.

That logic is absurd and ahistorical, says Rep. Jessica Farrar, D-Houston, a fierce supporter of family-planning and reproductive choice, who, as the only woman on the House State Affairs Committee – where most abortion-related policy issues are heard – is often put in the unenviable position of trying to fight such reasoning. "That's la-la land," she says. In the great old days, "we didn't talk about rape or incest" or unwed mothers who just "went away for a while."

It was definitely la-la-land thinking that inspired the committee on April 2, when nine abortion-related bills, including Chisum's HB 175, were called for hearing. Of the eight men on the committee (excepting only Fort Worth Democrat Marc Veasey), seven lean toward this conservative, religion-driven definition of "life," making the committee by design a tough venue for women's rights advocates. The meeting quickly devolved into a free-for-all: Chair David Swinford, R-Dumas, imposed no time limit on witness testimony, nor did he ask those testifying to stay on point. The session droned on until after 4am, dominated by a stream of middle-aged women determined to share tales of abortions past and the consequent turmoil in their lives. Rhonda Arias, founder of something called the Oil of Joy for Mourning, argued that many women in Texas prisons trace the source of their problems to abortion. (Arias played a video for the committee wherein one woman averred that abortion turned her into a "crackhead whore.") Abortion usually results in substance-abuse problems and, therefore, Arias concluded, actually leads to an "increased risk of becoming involved in auto accidents." Much of the evening was devoted to more of the same.

After 11 torturous hours of predominately one-sided testimony (no reproductive-rights advocates were called to testify until nearly midnight) each of the nine bills under consideration – including Chisum's HB 175; HB 1750 by Rep. Geanie Morrison, R-Victoria, requiring doctors to collect a litany of information about clients and their reasons for choosing abortion, to be crunched into an annual "aggregate" report by the Department of State Health Services; and HB 859, by Rep. Robert Talton, R-Pasadena, requiring doctors to retain fetal tissue from abortions performed on girls under 14 for DNA analysis (read, paternity testing) – was left pending in committee where, at press time, they remain.

Meanwhile, instead of finding ways to reduce the incidence of abortion by increasing access to preventative reproductive health care, lawmakers have again allocated $5 million over the coming biennium for the Alternatives to Abortion program, created in 2005 through a budget rider authored by Sen. Tommy Williams, R-The Woodlands. Supporters assert that the program is necessary to ensure that women facing unplanned pregnancies understand that they have "options." (Lawmakers appear to believe women are too addled to understand they could carry a pregnancy to term but are nonetheless perfectly capable of parenting.) Funding diverted directly from the family-planning budget is allocated primarily to a network of "crisis pregnancy centers" – unlicensed centers providing no medical services but only information, counseling, and support that "promotes" pregnancy.

Attempts by reproductive-rights supporters, mostly Democrats, to end the program, have thus far failed. Lawmakers are instead now urging their colleagues to approve measures that would regulate CPC operations. For example, Senate Bill 1174 by Sen. Rodney Ellis, D-Houston, would require CPCs to employ at least one licensed health-care provider or counselor, set minimum health and safety standards, and allow for inspection by the Health and Human Services Commission; HB 2142 – a truth-in-advertising measure by Eddie Rodriguez, D-Austin – would impose criminal and civil penalties for CPCs that lead women to believe they actually provide pregnancy-related medical services. Should Ellis' regulatory-oversight bill fail, there's HB 2223, by Mike Villarreal, D-San Antonio, which would require CPCs to provide medically accurate information and to disclose that they are not licensed health-care providers (and thus cannot "accurately diagnose" pregnancy) and do not provide preventative services. At press time, none of the bills were scheduled for a hearing.

Ironically, the idea of CPC regulation has, thus far, been derided by the program's defenders. CPCs aren't meant to provide medical services, Chisum told KUT radio on April 16, so imposing "some kind of regulation" would only add cost to their operations, thus limiting the number of women served. It's the sort of thinking that confounds Villarreal: "Unplanned pregnancies in Texas … lead to social costs in every part of the budget and in every part of life," he told reporters at a Monday press conference – diverting money from reproductive health care to feel-good programs like Alternatives to Abortion does nothing to address the problem. "I scratch my head," Villarreal said, "and wonder what the real agenda is."