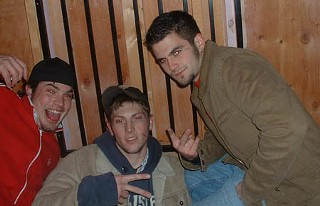 After their photos ran on the local evening news, members of the Midgetville Gang – the mental giants who broke into gamer Richard Garriott's property on Coldwater Canyon in southwestern Travis Co. in February, stole a bunch of liquor and wine, and then dropped a digital camera they'd used to photograph themselves during the burglary – began singing like birds to Travis Co. Sheriff's Office Detective Don Rios. According to their statements, the group of nine (ranging in age from 18 to 22) was hanging out at the Loop 360 overlook by the Pennybacker Bridge when one of them suggested they take a walk over to "Midgetville," the name they'd given to Garriott's property and its "numerous" small buildings. (Get it? Small buildings equals Midgetville. Clever, eh?) Apparently, at least one member of the group, Travis Foxell, told the others he'd been to the property before and allegedly showed off the "tavern pipes and minted coins" that were souvenirs of the experience – interestingly enough, Garriott's property had also been burgled before. Ignoring the "no trespassing" signs, the gang ambled onto the property, broke into several of the small buildings, and thieved, it seems, whatever liquor they could get their hands on. According to arrest affidavits filed last week, after the partners in crime saw their mugs flashed on the news, they knew the jig was up. Despite an apparent plan to offer a cover story about the reason they were on the property, five flipped, fessing up to the fuzz. All nine have been charged with burglary (a state jail felony) and/or criminal trespassing (a class B misdemeanor).