Have an opinion about possible changes to the protected Capitol View Corridors? View preservation squawkers – and Downtown economic development boosters – will likely want to make themselves heard by May 4. That's when the Downtown Commission – asked by City Council to review the view corridors and recommend updates – will close the window for public comments on its March 29 draft report.

The Capitol View Corridors were given separate city and state legal protections in 1983, in order to preserve views of the state Capitol from key vantage points around the city. The corridors are defined by plans that limit building heights, and thus development, between the vantage point and the Capitol. Last September, after receiving a report from the Downtown Commission that detailed the limited sites available Downtown for high-rise development (desired for Downtown residential), council asked the volunteer, council-appointed commission for an inventory and evaluation of the corridors – particularly the views from highways – as a follow-up research project.

Whether this project should have been assigned to the Downtown Commission at all is ethically controversial. Several downtown commissioners have inherent conflicts of interest; for example, Perry Lorenz, Robert Knight, and Tim Finley all are Downtown landowners with their own major development deals cooking. Given that Mayor Will Wynn recently recused himself, upon the advice of city legal, from a council vote on a Downtown high-rise project because he owns a Downtown condo, giving this job to developers – however civic-hearted and fair-minded – has been seen as an ill-considered choice by council.

"The integrity of the city report is subject to question because of the real estate holdings of those directly participating, and the recommendations impacting their individual properties," said Joe Pinnelli, a former president of the Heritage Society of Austin. "The city's minimal ethics requirements seem to have been simply disregarded. We look forward to an explanation."

Back in February, Julian Read, a member of the society's executive committee, also expressed worry about the report. "The Heritage Society of Austin is extremely concerned about the review initiated by the Downtown Commission," Read said. "The commission has pursued its review on this important issue with no involvement or testimony from the vast preservation community that can testify to the inherent economic and cultural value of preserving views of the Capitol."

HSA is reviewing the report and plans to submit a detailed response. Read said in February that HSA "will strongly oppose any modification of the existing Capitol View Corridors." Pinnelli said after the draft report's release, "Some of the recommendations may be reasonable – but others raise significant concerns. For example, the recommendation to completely eliminate the view corridor benefiting the largest area of East Austin, CVC 10, while views impacting other sections of the city are preserved or merely modified, raises an issue of equitable treatment that the commission – and the city – must address." East Austin residents have expressed concern about having their views taken away, and treated as less important than west-side views; any altering of views from the east and southeast may prove the most controversial.

Most of the draft report recommendations are mild. The Downtown Commission recommended "No Change" for 19 of the 30 existing view corridors. The remaining 11 are recommended for re-evaluation, modification, or further study. Of these, three are technical corrections only, and three more are adjustments that would reconcile conflicting state and city definitions of the corridors. For two (Mueller and LBJ Library), the recommendation is simply to update – to omit portions of the view that already have been, or soon will be, obscured. That leaves three recommended changes to highway corridor views (from MoPac and northbound I-35) and one to the view corridor from Wooldridge Square Park – all likely to spawn controversy and debate. Altering the views from the east and southeast may prove the most controversial, as East Austin residents have already expressed concern about having their views taken away.

In truth, a few of the vantage points selected back in 1983 now appear rather random. In a number of cases, the views have become partially obscured. The accompanying photos in the "Downtown Development and Capitol View Corridors" report – which show the actual view today from each vantage point that defines a corridor – make a compelling case that it would not be heresy to consider in a public dialogue, at least, updating or correcting some view corridors.

The Downtown Commission is scheduled to further discuss the draft report at a public meeting on Wednesday, April 18, at 5:30pm at City Hall. Commissioners hope to finalize and approve the report at their May 16 meeting. Their recommendations then will go to City Council – offering another opportunity for public dialogue. But nothing is likely to change too quickly; enacting the recommendations in the report will require action by either council, the Texas Legislature, or both.

"The people pushing this need to understand that the Capitol views belong to all the people of Texas, not land speculators and developers," said former state senator and U.S. Rep. Craig Washington, who was instrumental in passing the state legislation to protect the views.

The report "Downtown Development and Capitol View Corridors" is available at ci.austin.tx.us/downtown/downloads/CVC_Draft_Report_3-29-07.pdf. Written public comments on the draft report should be submitted to Michael Knox, the city's Downtown principal planner, at michael.knox@ci.austin.tx.us by May 4. 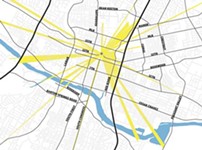