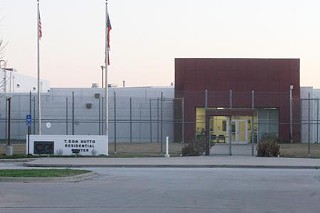 The T. Don Hutto Residential Center in Taylor, which critics say would be better described as a prison camp, still has several children incarcerated inside with their families. (Photo By Jana Birchum)

By now, most of the country has heard of the T. Don Hutto Residential Center in Taylor, 40 miles north of Austin. About four months ago, protests outside the detention center, organized by the human-rights coalition Texans United for Families, garnered local coverage that soon turned national. In February, the New York-based Women's Commission for Refugee Women and Children visited the Hutto facility and called for its immediate closure, stating that the standards of care – from the food to education to health care – are unacceptable. Small changes have since been made to the educational program, which was recently increased from two hours a day to seven. The facility – run by the largest private prison company in the world, Corrections Corporation of America – was a prison before it reopened for business almost a year ago as a "residential facility" for immigrant parents and their children, many of whom are asylum seekers. Of course, CCA is in the incarceration business, and at Hutto, families aren't held in apartments but in prison cells.

On March 6, the American Civil Liberties Union filed a suit against the Department of Homeland Security and its secretary, Michael Chertoff, calling the Hutto facility in violation of Flores v. Meese, a 1997 settlement that established a minimum of standards for the care of minors in federal immigration custody. The suit is filed on behalf of 10 kids who were incarcerated at Hutto; six have since been released with their families: Kevin Yourdkhani, Richard Carbajal, Angelina Carbajal, Aisha Ibrahim, Mohammed Ibrahim, and Bahja Ibrahim. Deka Warsame, mother of the Ibrahim children, must wear a tracking device until her immigration status is determined, "further confirmation that alternatives to detention are viable," says Amy Everhart-Davis, communications director of the ACLU of Texas. "And [it] poses the question of why such alternatives are not employed in the first place." Congress has stipulated that the detention of kids should only occur after all other alternatives have been exhausted. Furthermore, as Michelle Brané, the director of the WCRWC's Detention and Asylum Program, pointed out in testimony before Congress less than a month ago, immigration violations are civil offenses, not criminal ones. Yet DHS arrests more than 1.6 million undocumented people each year in this country, of whom more than 230,000 are detained.

The 1997 settlement upon which the ACLU is basing its case requires that the federal government actively seek the release of children in its custody unless their safety is in question or if there is any indication that they will not appear in a court hearing and that children be held in the least restrictive setting and be provided with adequate food, medical care, and education. (Each plaintiff in the ACLU case has complaints about life in Hutto, from cruel guards to disgusting food to negligence in health care.) A common argument in favor of detention is that people aren't showing up for their immigration hearings, but "that doesn't apply to one plaintiff in this case," says Vanita Gupta, an ACLU staff attorney with the Racial Justice Program. Another reason that the federal Immigration and Customs Enforcement agency gives for the existence of detention centers like Hutto is that they're trying to keep families together, which Gupta agrees is of utmost importance. "However, there are a lot of intermediate steps that the federal government could have taken to ensure that its immigration laws would be complied with that would be far short of detention." Gupta offers electronic monitoring with ankle bracelets as a viable option, saying that it is more humane and cost-effective than detaining people at Hutto, which costs ICE $2.8 million a month.

Four plaintiffs remain imprisoned at Hutto. According to the ACLU, 9-year-old Saule Bunikyte and her 15-year-old sister, Egle Baubonyte, have been held with their mother, Rasa Bunikiene, since Dec. 14, even though the mother is married to a U.S. citizen who's willing to have the girls live with him. Four-year-old Wesleyann Marieh Emptage has, along with her mother, Raouitee Pamela Puran, been at Hutto since Dec. 28. Puran fled Guyana after her husband was kidnapped by forces linked to the government, who then threatened to kill the entire family. When she applied for a visa to legally enter the U.S., she was denied due to lack of assets. She came anyway and is now seeking asylum from her cell. Finally, 13-year-old Sherona Verdieu and her mother, Delourdes, have been held at Hutto since Sept. 12, the longest of any of the plaintiffs. They fled Haiti after Delourdes' husband was kidnapped and killed when she couldn't afford the ransom. She, too, is seeking asylum from behind bars.

In the four months since the T. Don Hutto Residential Center was first brought into the public eye, only one elected official has called for any action: In February, state Rep. Eddie Rodriguez introduced House Concurrent Resolution 64, requesting that DHS explore all alternatives to the detention of immigrant and asylum-seeking families. It was referred to the House Committee on State Affairs in February, and no action had been taken on it since.

Supporters of T. Don Hutto detainees will stage a three-day walk this weekend in protest of ICE policies, from the state Capitol to the facility in Taylor. Walkers will depart from the Capitol steps at 10am Friday and finish at the intersection of Springdale Road and U.S. 290; on Saturday at 9:30am, they will begin at Manor City Hall (West Parsons & South Burnet) and march to Rice's Crossing (Highway 973 & FM 1660); on Sunday, the third leg will resume at Rice's Crossing and finish at the T. Don Hutto Residential Facility; a vigil will then be held until 8pm.