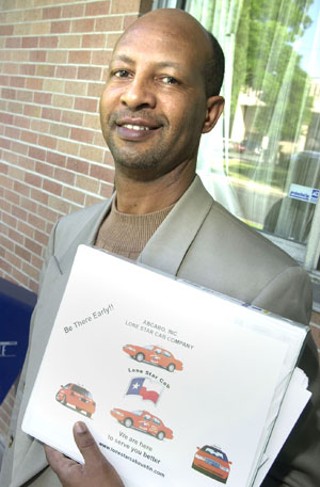 Lone Star will be an owner-operated or co-op style business. "The owner-operated business model empowers drivers and incentivizes them to provide better service," said Martinez. "It's an extremely unique opportunity to create a franchise of this measure." Lone Star founder Solomon Kassa describes the company as "kind of a hybrid of co-op and corporate. … It's there to sell shares to drivers" should they wish to become shareholders in the company. (If they don't, Kassa says his company's comparatively lower terminal fees and rental rates will still be a boon to drivers.) Aside from providing funding, these owner-operators will also form a board of directors, which, in turn, will hire a manager to oversee the company; Kassa compared it to Austin's form of government, under which City Council hires a city manager to oversee daily operations. "This is one more step forward in our efforts since 2002," says Kassa (Lone Star was denied a cab franchise in 2003 on the grounds the market was already too crowded). An Ethiopian immigrant, Kassa called the opportunity "the right way to bring our American dream forward." Martinez also applauded Lone Star's computerized dispatch service as safer for passengers.

Over recent weeks, Martinez had steadily morphed into the council leader in the franchise debate. He noted from the dais that his office had been responsible for the delay in naming the winner (originally scheduled in January), as he requested the city auditor examine each applicant's finances more closely. While nothing came back on Lone Star or third-place applicant Longhorn Cab initially, the auditor noted discrepancies in Capital City's application. While a follow-up from the auditor dispelled the questions about Capital City's cash-on-hand and business relationships with other franchises, it's likely the extra attention they received didn't help any. "There were some questions that were answered that pointed to information staff didn't look at," Martinez says, noting that the final decision rests with council.

That decision passed by only a single vote, 4-3, which means the council will have to revisit the matter on second and third readings. Voting with Martinez were Jennifer Kim, Lee Leffingwell, and Will Wynn; Sheryl Cole made the unsuccessful motion to give the franchise to Capital City, supported by Betty Dunkerley and Brewster McCracken. Echoing Dunkerley's comments from the dais, Cole said, "I wanted to go with the staff recommendation and the [Urban Transportation Commission] recommendation. The taxicab union [the ad-hoc United Cab Drivers Association, not a recognized union] also supported Capital City." Cole was also concerned that with only a scant 55 permits to be issued, the winning company should be the strongest financially. Kim countered, "If it turns out [Lone Star] can't handle it, we'll pull the franchise back, and we'll go through this again, but I believe it's worth giving them a shot."

The hearing Thursday morning was crowded and contentious, with dozens of drivers jammed into City Hall and not shy to express their opinions, occasionally doing themselves no favors. The delay in picking a winner prompted one speaker – Ray Castro, a Capital City advocate – to ask council, "Is somebody lining your pockets?" It drew an angry – or, more precisely, pissed-off – response from Will Wynn. "I'm not going to sit here and listen to you make some accusation about my council colleagues or I lining our pockets by not granting a cab franchise. … You're about to lose a vote," he said, before forcefully ordering Castro to sit down. "We're not going take that lightly – I'm certainly not," said Martinez, noting it was the second time such accusations flew from Capital City boosters. "I'm glad the mayor reacted the way he did."

The debate isn't entirely over, as both companies are likely to keep twisting arms while the final approval hangs fire. We'll see if more bad blood spills at second and third readings.