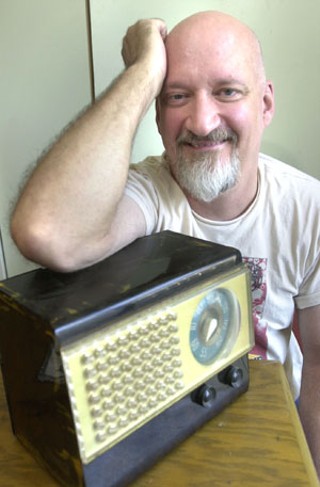 In his heyday, his grumbling voice boomed into the night on KLBJ-FM, the master of ceremonies for evenings fueled by the guitar-crunching bombast of the Rolling Stones, ZZ Top, and the Who. Turn up Foghat's "Slow Ride," and he was the man. Untold numbers of beer bongs were hoisted in his honor. Joints were lit to his sainthood. And women called in to say his baritone invoked lewd thoughts as they drove up I-35, blasting the Zep on the car stereo.

For 16 years Johnny Walker was part of Austin rock & roll radio, manning afternoon and evening shifts at KLBJ, the hard-rock icon. Through the years the business changed, the music turned into "classic" rock, and the business evolved into the world of perky Top 40 American Idol lovers. But Walker – his voice tinged with the excess of Southern rock, more Lynyrd Skynyrd than Ryan Seacrest – was a consistent voice on KLBJ, putting together one of the longest-running stints on local radio.

The run ended two weeks ago, when his bosses at Emmis Communications, which purchased KLBJ four years ago, fired him. Officially he was let go for "budget reasons," along with "A.D.," another KLBJ staple. However, Emmis market manager Scott Gillmore also noted that Walker's evening show, which has been prerecorded for the last three years, was "not performing well" in the ratings.

In many ways, it was the end of an era. Walker is a member of a disappearing breed of hard-rock deejays, grounded in Led Zeppelin and the Allman Brothers, who lived the music as much as the bands and fans. On the air, they were conversational and honest, making it OK to share stories of late-night concerts, hangovers, and one toke over the line, sweet Jesus. "Johnny is just Johnny," said Dale Dudley of the KLBJ morning show, who has known Walker for 25 years. "He just sounds like one of your buds."

But it hasn't been that way for a while. Three years ago, Emmis demoted Walker to part time and shifted him from afternoons to the prerecorded evening show. For more than a year, Walker has worked a full-time gig selling computers. After his shift, he'd go into the station and sit in front of a computer, recording station breaks when the computer told him to record.

Although Walker is off the air for the first time in 30 years, he's not eager to find another job in radio. "Radio is soulless," he said. "I think we can burn it all down and start over again."

Needless to say, Walker, now 52, didn't get rich as a rock & roll deejay. He lives in a small, cluttered apartment in Northwest Austin, decorated with his Chronicle reader awards and his collection of vintage radios. Long-divorced, he has a 22-year-old son, Tyler, who attends school in Austin. Lounging on his beat-up couch in jeans, a Jefferson Airplane T-shirt, and no shoes, he is a bit taller than 6 feet, with a shaved head, a gray beard, and tattoos of a flaming horseshoe on one arm and a cowgirl riding a six-shooter on the other. The biggest misconception about him among listeners, he says, is that they think he's fat. He's not.

Walker refused to talk about Emmis, his former employer, citing conditions of his severance agreement. He's not bitter, he says, and he's moving forward and feels good about the future. But he was willing to talk about a period in radio that now seems like long ago, when not everything at a station was directly related to the bottom line. "I lived in a bubble for 13 years" at KLBJ, Walker said. "They really treated us like a family. You had to really screw up to lose your job."

Walker was well-traveled in the world of radio before he landed at KLBJ, which was then owned by the family of the late President Lyndon Johnson. After falling into a radio job on the Texas Tech campus, where he studied music composition, he bounced to stations in Lubbock; Albuquerque, N.M.; Reno, Nev.; and Spokane, Wash., working for country, Top 40, and rock stations. In 1987 he landed at Z102 in Austin as part of a morning show called The Breakfast Flakes, a gig that lasted about two years. "They decided to 'go in a new direction,'" Walker said, a phrase he heard several times early in his career.

KLBJ's status as one of the top AOR (album-oriented rock) stations in the country was well-established when Walker joined in 1991. It was part of a legendary group of stations, like KMET in Los Angeles, which made FM radio cool, creating stars of Jimi Hendrix, the Doors, and the Foreigners of the world. The stations craved rebel personas, speaking to a generation of bikers, misfits, and dopeheads who believed that Happy Days Top 40 radio was bullshit.

At KLBJ, Walker found a sense of freedom on the air. Like many former employees, he describes that era at KLBJ as some sort of radio nirvana. It was simple, he says. "We played a ton of local music and had a really good time."

While radio in general was already fairly uptight, there were few restrictions on the deejays at KLBJ other than to avoid the infamous "seven dirty words." Walker was still confined by a playlist, but it was a long list, with plenty of opportunity to roam. He could bounce from Zeppelin to the Cult to Nirvana without complaints from a consultant. He was also able to put local bands on the air like Pushmonkey and Little Sister. When he switched to afternoons, he played Soulhat's "Bonecrusher" at 5pm every Friday to hail the coming weekend. (Soulhat's Web site notes that Walker always played the longer radio version, despite complaints about profanity and the length of the song, which ran about nine minutes.)

As much as ratings, Walker's popularity was measured by his knowledge and interaction with his legion of unruly, T-shirt-clad fans. "They love who he is, and Johnny never pretended to be anything but what he is," said Patty Lotz, aka Powermouth Patty, who teamed with Walker in the afternoons for two years. "He's a very grassroots-rock guy, no apologies. He was not pretentious in any way."

For Walker, it was fun being a rock & roll deejay. He became part of the rock & roll scene. On the air, Billy Gibbons of ZZ Top or Joan Jett might stop by for an unannounced chat. Off the air, he was a staple at clubs like the Black Cat and Steamboat. He'd get off his shift at midnight and be in the clubs by 1am. "I was on Sixth Street six nights a week," Walker said. "They expected you to be in the clubs and on the streets. It was all part of the job." One night he'd be diving from stage at a Soulhat show, and the next night he'd be onstage with Cheap Trick.

Bob Schneider, who was cementing his reputation for debauchery with his early band, Joe Rockhead, was a familiar companion. "We got pretty good at staying up for long nights at a time, without the help of any drugs," Walker said (some might smirk at the no-drugs recollection). They brought their own energy to station road trips for concerts. "He and Bob Schneider were in a league of their own when it came to partying on bus rides," Dudley said. When Schneider disbanded Joe Rockhead, Walker felt a special sadness. "After they broke up, I thought, 'How am I going to get laid now?'"

But he remained part of the scene, going to shows and playing local music on the air, whenever he could squeeze it in. "He's one of the deejays who actually came to see a band live if he liked them," said Jason McMaster of Broken Teeth. "And he would bring people with him. It was a big deal. ... And he wouldn't ask to be on the guest list."

Kicked to the Side

Walker's run at KLBJ lasted longer than most in the modern radio industry, which went through cataclysmic changes at the end of the 1990s. Clear Channel and other companies were gobbling up smaller companies, spurred by the Federal Communications Commission decision to relax ownership regulations. With stations attempting to mine every format niche, rock radio split into different genres, diminishing the pull of the classic-rock stations. "Rock has been fragmented more than any other musical format, more than AC [adult contemporary], more than Top 40," said Tom Taylor, editor of Inside Radio, an industry newsletter. "There used to be just 'rock,' and now the genre has been splintered all over the place, both musically and on the radio."

The turn of the century was a watershed for the industry. Hundreds of disc jockeys lost their jobs as stations cut budgets and, in many cases, switched to recorded or syndicated shows. Other than morning shows, stations were no longer paying big bucks for rock & roll "personalities." "I think they've been treated like $2 dogs and kicked to the side," said Lotz, who is now out of radio. "There is no such thing as a career in radio anymore."

A year after Emmis bought KLBJ in 2003 – and a year after Emmis President Jeff Smulyan said he didn't expect major changes at the Austin station – Walker lost his full-time gig, along with Lotz and longtime LBJer Peg Simmons (who now works part time for the station). Although he maintained his evening show – and his health benefits – clearly not everyone in management was a Walker fan. Since then, Emmis, like radio companies around the country, has been tightening budgets and sticking to "more music and less talk," making Walker's dismissal last month less than a total surprise.

To let Walker go "to save a little cash" is "disappointing on so many levels," Dudley said. He sees the end of Walker's tenure at KLBJ as part of the "homogenization" and "dumbing down" of media. "Johnny fought to the bitter end," Dudley said. "I'm still hoping that somebody will come along and recognize [deejays like Walker] have something to contribute."

Walker says he would return to radio, in the right situation, but he refuses to look for a job outside Austin. "I don't want to leave Austin," he said. In addition to his full-time gig selling computers, he's promoting shows at bars and producing charity events with local motorcycle clubs. "You're going to see a lot of me," Walker said. "They can take me off the radio, but they can't take my name away."