How Do You Pick a Chief? 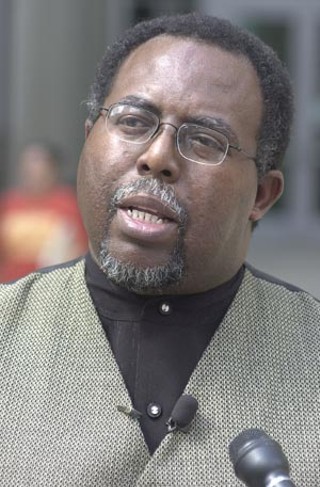 Not long after former Austin Police Chief Stan Knee retired last spring to take a security job in Afghanistan, Austin NAACP President Nelson Linder joined representatives of more than a dozen local groups that submitted a letter to City Manager Toby Futrell, asking that the city's search for a new top cop be, in its entirety, "open to the public." Specifically, the groups – among them the American Civil Liberties Union, Austin Neighborhoods Council, and the Gray Panthers – asked that the city's search criteria be made public, that the city post a "calendar" of hearings related to the selection process, and that citizens be allowed to ask direct questions of job candidates during public hearings.

These seemed like reasonable requests, given the recent state of police-community relations. There were the troubling shooting deaths of Jesse Lee Owens in 2003 and Daniel Rocha in 2005, for example, and the 2004 Midtown Live nightclub fire that sparked the "burn baby burn" fiasco, when responding officers exchanged celebratory messages about the fire. In the months after the groups submitted the letter to Futrell, while the search for a chief continued, members of the ad hoc coalition had been in communication with city staff, and the city had taken steps to keep the public apprised, by posting to the city's Web site a list of qualifications and qualities expected in a successful applicant, for example.

Yet on April 4, when the city released a list of nine semifinalists, Linder was caught off-guard: The city "hadn't called anybody" from any of the coalition groups, he said. Even more troubling was the concurrent announcement that Futrell had already chosen a 10-member panel to interview the semifinalist candidates (phase one of the final selection process, according to the city). The panel is composed primarily of city staff, other public officials, and members of two chambers of commerce – but is notably without a single member from the coalition of those groups that have, from the start, been so concerned with the necessity of community involvement in the hiring process.

Indeed, the city says it won't be until phase two – after the candidate list is narrowed again, to no more than five candidates – that the process will broaden to include direct community input, the very situation the community groups had hoped to avoid. "We don't want to be invited in at the end of the process," when city management has, implicitly, "already decided" who to hire. "The process is flawed, and we're upset," says Linder.

The group of candidates includes acting APD Chief Cathy Ellison (one of five minority candidates and the only woman on the list), the current chiefs of the Waco and El Paso police departments, a former Houston Police Department assistant chief, the former head of the U.S. Drug Enforcement Administration, and a division chief with the California Highway Patrol. (Noticeably absent is Assistant City Manager Mike McDonald, a veteran APD officer and former APD assistant chief, arguably the most qualified in-house choice. McDonald didn't apply for the job, he said, because he feels his current job as assistant city manager "puts me in a very significant position to impact all of public safety" – not only police but also fire and EMS, whose administrators are within his chain of command.)

On paper, each of the nine candidates looks well-qualified, Linder said. Nonetheless, says Debbie Russell of the Austin ACLU (who thinks that Linder, who with Ellison co-chaired the African-American Quality of Life public safety committee, should've been tapped to sit on the phase-one panel), the fact that Futrell has already trimmed the pool to nine, without any community input, leads Russell and other observers to suspect that Futrell is already eyeing a specific candidate for the post. Linder says he believes Futrell already "knows who she wants" to hire. Russell concurs, especially considering that none of the named interview panelists are "really critics of the police department." She believes it likely that, by the time the public is called on for input, the choice will, for the most part, already have been made. "The only reason I can think of" for doing things this way, says Russell, is to send "a loud and clear message that [the city] doesn't want our involvement."

The notion that city management might already have someone in mind to be chief – or that Futrell will have made her own choice by the time there are just two or three candidates remaining – isn't much of a stretch. During last year's search for a new police monitor, when the city finally opened the floor to public comment, it was obvious that former Travis Co. Assistant District Attorney Cliff Brown – flanked by an out-of-towner also-ran and acting Monitor Susan Hutson – was the chosen one. Brown may turn out to be fine, but Linder and Russell aren't pleased with the idea of selecting a police chief – charged with overseeing a 1,300-officer and 700-civilian personnel department and a $183 million-plus annual budget – using the same sort of preordained process.

Assistant City Manager McDonald responds that the selection process is designed, specifically, to encourage community input. Last summer, after hiring a Georgia consulting firm, Slavin and Associates, to coordinate the application process, the city conducted "several community meetings" (which included the ACLU, the National Association for the Advancement of Colored People, and other groups) in order to compile "profile information" – a sense of what the community is looking for in a new chief. That information was used to narrow the field of more than 60 initial applicants to a group of 25 that Futrell and staff then cut to nine. And the majority of the interview panel is made up of key city staff and county officials, because they are exactly the people the police chief must "deal with" (and well) in order to succeed as an administrator. The panel includes McDonald, Chief Financial Officer John Stephens, Police Monitor Brown, and Rosy Jalifi of the city's Economic Growth and Redevelopment Services. McDonald says the other panel members were selected in a deliberate attempt to keep the community involved and to vet community concerns, he says. For example, Paula Hui, chair and president of the Austin Asian-American Chamber of Commerce, and Elizabeth Gonzales, former chair of the Hispanic Chamber, were chosen not for their "business connections" but for their strong "community connections," McDonald said. And veteran Fort Worth Police Chief Ralph Mendoza was selected based on his demonstrated ability to foster strong ties between police and minority communities.

Once the panel has weighed in, Futrell will further narrow the field to no more than five candidates, who will be brought back to town for a series of "cluster meetings" with "everyone from the NAACP to the ACLU to the police union," McDonald continued, and a series of public meetings where each candidate will be available for direct question-and-answer sessions (likely held at the Palmer Events Center). Futrell will consider the public's assessment of each candidate's "strengths and weaknesses" as she selects a final candidate to present to council for approval, said McDonald. In that way, he believes the final decision will ultimately be made by the Austin public. "I can tell you this truly is a wide-open process," says McDonald. "There is no one that is predetermined to be chief at this point."

Ralph Mendoza, chief of police, city of Fort Worth

*Oops! The following correction ran in our April 19, 2007 issue: In the article "How Do You Pick a Chief?," April 13, we inadvertently misspelled the name of acting Austin Police Monitor Susan Hutson. We apologize for the error.