Tweet
print
write a letter
Here's a story that may sound familiar to working mothers: A longtime sales executive for Clear Channel Communications' Austin stations is suing the company, alleging she was fired because she was pregnant.

But, according to her lawsuit, Lonsdale's status changed in spring 2006 when she announced she was pregnant with her second child and planned to take maternity leave at the end of the year. According to Lonsdale, when she revealed the pregnancy, her boss, director of sales Lise Hudson, expressed skepticism she could handle her job, suggesting it would be "too difficult to keep working as national sales manager with two children." Hudson recommended she take a local sales position, which would give her "more freedom," Lonsdale, who now works as a regional sales manager for Border Media Partners, charges in the suit.

But Lonsdale considered the offer a demotion and declined. At that point, Hudson "refused to accept the response." In the suit, Lonsdale says months of trumped-up allegations against her job performance followed, even though national advertising sales were up for the year and she consistently received praise from her peers. In October, two months before she was due to take maternity leave, market manager Pam McKay told Lonsdale the national sales manager position had been eliminated. The suit alleges the excuses to let her go were "fabricated" and she was "illegally" removed under "the false assumption that she would be unable to perform her job duties after bearing her second child." (Lonsdale's attorney did not return phone calls.)

Reached by phone this week, McKay and Clear Channel attorney Brian Zimmerman declined to comment. In a court filing, Clear Channel denied all the charges, saying the company's actions were "based solely on legitimate, non-discriminatory business reasons."

The suit threatens to get nasty if it goes forward. (In a late-breaking development, Hudson abruptly left Clear Channel this week. Company executives did not immediately return calls seeking details.) In the court filing, Lonsdale alleges Hudson's "unprofessional employment practices are well known" and promises to bring in a long list of local radio executives to testify. Clear Channel changed her pay structure without notice and shorted her on a bonus, the suit charges. Lonsdale was due to earn a base salary of $110,000, plus bonuses and stock options, according to the court filing.

The suit details an alleged plan by Hudson to "harass" Lonsdale, including charges that she was not communicating with her colleagues. In one case, the suit says, she was chastised for filing a report at "1:01 p.m." when it was due at 1pm. But Lonsdale's "stellar record and widespread support from her fellow colleagues doomed [the plan] to failure," the suit says. The court filings also note that the decision to eliminate her position was a contradiction of the earlier concerns that the job would be too much work for Lonsdale after the birth of her second child.

Lonsdale's tasks were not eliminated; they were "simply reassigned to a male employee," who would never get pregnant, the suit charges. That employee was Lance Aldridge, who, according to the suit, was "handpicked" by Hudson to be general sales manager for the River, Clear Channel's Christian music station. Before Lonsdale was terminated, Aldridge allegedly sent an e-mail to a co-worker saying, "Something good may be happening; they may be getting rid of her [Lonsdale]."

After Lonsdale filed a discrimination claim with the city, Clear Channel revoked her severance deal, according to the suit. The lawsuit asks for compensatory and punitive damages, noting that reinstatement is not an option. 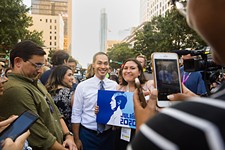 Julián Castro, Women of Color, and Texas 2020
The path toward turning the state blue 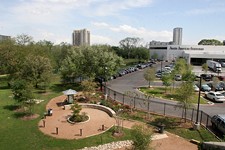 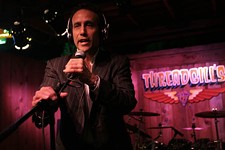