AMD Not So Clean? Save Our Springs alliance photographed this runoff from the AMD construction site, fouling stream waters with mud that was supposed to be stopped by a silt fence.

As heavy rains fell on Austin early last week, large amounts of sediment-laden runoff were spotted flowing from the Southwest Austin construction site of AMD's controversial Lone Star campus. On Wednesday, the city of Austin issued a written notice of noncompliance for "failure to provide adequate erosion and sedimentation controls." Officials from the city's Watershed Protection and Development Review department ordered AMD to revise its dewatering plan to contain sediment on-site after witnessing dirty water being pumped off the property. AMD was also told to "remove all sediment deposited in the waterways" and "maintain all temporary erosion and sedimentation controls."

The Save Our Springs Alliance, long-opposed to AMD's headquartering of its massive new campus so close to the sensitive Edwards Aquifer Recharge Zone, documented the runoff with photos and video (available at www.sosalliance.org/Public/BBCopy.cfm?IID=293) and pounced on the chip-maker for breaking its litany of pregroundbreaking promises to set a new standard for eco-friendly construction.

"It's remarkable that a company who produces the most advanced computer chips in the world can't figure out how to keep construction runoff from finding its way into creeks," said SOS communications director Colin Clark. While not surprised by the incident "since they've scraped a big hillside," Clark said, "if we get another big rain, who's to say it won't happen again and pollute the Barton Springs Watershed?" And this is just the construction phase, he added, the addition of pavement and cars will introduce different kinds of pollution.

AMD spokesman Travis Bullard said, "There was rain all over Central Texas; every construction across town had runoff, and that's just part of building in Central Texas." Asked why the AMD's well-publicized, sophisticated storm-water collection systems failed to prevent the runoff, Bullard said, "When dealing with an active construction site, it takes time to get a project's systems functioning as architecturally designed." He went on to say, "You can argue as to whether development should happen in that part of town" but said it's "disingenuous to say you can't build anything over there." Bullard said AMD saw the notice of violation as the city's suggestion of construction-site improvements and said it is "conceivable" that another runoff violation could occur. "No storm-water system is perfect," he said.

Bullard took issue with AMD's runoff being referenced as "pollution," acknowledging sediment's potentially detrimental effects but saying that "there's no evidence that water from Lone Star contained pollution or sediment levels not tolerated by the city. The question is what's the quantity and quality of the runoff."

But Mark Mauldin, the city's environmental conservation program manager, said the visible sediment deposits inspectors witnessed leaving AMD's site in and of themselves constitute a violation. Mauldin said AMD was back in compliance the day after the issuance of the violation, which was based primarily on crews' pumping of sediment-heavy water off the site because a sediment trap (or basin) designed to catch and remove solids from runoff water was about to overflow, due to a clogged filter pipe. "If the sediment trap was working properly, they wouldn't have had a problem," he said.

City spill-response investigators reported to Mauldin on Tuesday that areas roughly 100 to 150 yards from the AMD site, near Williamson Creek, will require light cleanup, but thanks to leftover silt fences from the construction of nearby Rialto Boulevard, the sediment didn't appear to reach Williamson Creek.

Chuck Lesniak, an aquatic biologist and city environmental cleanup expert, said, "Sediment can certainly be described as pollution," adding that it has a detrimental impact on aquatic plant and animal life. "Similar discharges can, over time, degrade creek-bed quality, smother plants, and fill in rock fissures and gaps that are home to aquatic life." Certain amounts get into creek beds naturally, but large releases can put the natural system out of balance."

During a ceremonial topping-off event at AMD's construction site, CEO Hector Ruiz, speaking of the tech firm's local legacy, described the project as "the best way of harmonizing a business and a community in an ecologically and environmentally sound way." Now, more than ever, observers will be intently watching for any further environmental discord on AMD's part. 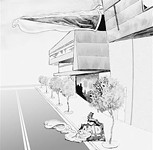 AMD's Favorite Charity
It could be me!