Tweet
print
write a letter
Two new pet-product recalls were announced over the weekend, following on the heels of the massive recall of Menu Foods products:

• Nestlé Purina PetCare Co. announced on March 30 a voluntary recall of all sizes and varieties of Alpo Prime Cuts in Gravy wet foods, with date codes 7037 through 7053, followed by plant code 1159. (The codes follow a "Best Before February 2009" date stamp on 13.2-ounce and 22-ounce cans of Prime Cuts and in Prime Cuts Variety Packs.) No dry foods are being recalled. Purina said the recall was prompted by the Menu Foods recall, after the company discovered that contaminated wheat gluten imported from China and implicated in that recall had also been supplied to Purina. Get more info at 800/218-5898 or www.purina.com.

• Eight in One Inc. pet products announced on March 31 that it would recall all lots of Dingo brand Chick'n Jerky treats manufactured for dogs, cats, and ferrets, out of concern that the product, also imported from China, is contaminated with salmonella. Eight in One is advising that salmonella can not only cause serious infections in dogs and cats but also can affect humans through cross-contamination created by handling the infected product. The Food and Drug Administration is aware of the recall, Eight in One said in a press release. Eight in One is asking anyone who purchased the product – sold in 3.5-ounce and 8-ounce packages for dogs and 1.5-ounce packages for cats and ferrets – to dispose of the jerky and to call Eight in One consumer affairs department at 888/232-9889 to get a refund for the cost of the product. (Full disclosure: A complaint about Dingo brand Chick'n Jerky made to Eight in One and to the FDA by staff writer Jordan Smith prompted the investigation that led to this recall after her two dogs died in January from complications related to salmonella poisoning after eating infected Chick'n Jerky.) 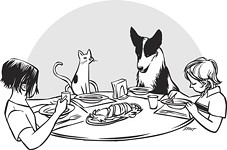 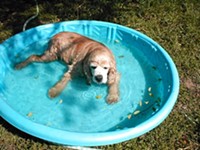