8th U.S. Circuit Court of Appeals says contraceptives are intended for use prior to pregnancy, meaning employers don't have to cover cost of contraceptives for female patients under health plans

Tweet
print
write a letter
According to a majority opinion from a three-judge panel of the 8th U.S. Circuit Court of Appeals, contraceptives are intended for use prior to pregnancy, meaning employers are not required to cover the cost of contraceptives for female patients under employee health insurance plans. The opinion comes in response to several sex-discrimination suits brought by employees of the Union Pacific Railroad Co., who argued that not covering contraceptives was a violation of the federal Pregnancy Discrimination Act, an amendment to Title VII of the landmark 1964 Civil Rights Act. The cases were consolidated into a single federal court action, and in 2005 Nebraska federal district Judge Laurie Smith Camp ruled in favor of the female employees, ordering Union Pacific to cover all FDA-approved contraception for its female employees.

The 8th Circuit last week reversed that decision, however, with Judge Raymond Gruender writing that since "contraception is a treatment that is only indicated prior to pregnancy," the pills or other devices had no "causal connection" to pregnancy. Lawyers from Planned Parenthood, who represented the employees, were dismayed by the ruling, which Planned Parenthood Federation of America President Cecile Richards called an "outrageous step backwards for women's health" – indeed, the UP health plan already covered prescriptions for the hair-loss formula Rogaine and for Viagra. "Title VII prohibits employers from making employment decisions – including what health-care benefits to offer – on the basis of sex or pregnancy," said attorney Roberta Riley, who represented the employees. "But that's exactly what Union Pacific did in this case." A spokesman for Union Pacific told The New York Times that the company did begin covering contraceptives in the wake of the district court's earlier ruling and that the company does not plan to discontinue that coverage.

Still, PPFA says the ruling is likely precedent-setting, and it's calling on Congress to pass the Prevention First Act, filed earlier this year, which in part would require health plans to cover prescription birth control. State Rep. Rafael Anchía, D-Dallas, has filed a similar measure, House Bill 268, which would require any "standard health benefit plan" to cover "prescription contraceptive drugs and devices." It was left pending after a hearing March 26 in the House Insurance Committee. Planned Parenthood in the WHP: On Again, Off Again
Judge thinks it's unlikely Texas will be able to justify the rule banning PP from the Women's Health Program 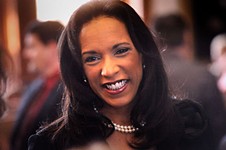