Tweet
print
write a letter
Rich Oppel, editor of the Austin American-Statesman, came under criticism Friday from none other than Carl Bernstein and Bob Woodward, arguably the most important journalists alive today.

As part of a public opening for the Harry Ransom Center's files about FBI Assistant Director Mark "Deep Throat" Felt, which UT bought along with other Watergate papers in 2003 for $5 million, the three were part of a Statesman-sponsored panel discussion at UT's McCullough Theatre. The discussion – Watergate and the Media: Did the System Work? – was supposed to be about the impact of Watergate on journalism, but it soon became increasingly uncomfortable for Oppel as the respected journalists questioned his role at the Statesman and his approach to news-gathering.

Bernstein was shocked when he discovered that Oppel runs the two most important sections of his paper: the news and editorial pages. He was amazed that Oppel did not see this as a dangerous conflict of interest. "You run the news desk and the editorial desk, and you don't think that's a problem?" Bernstein asked. "Did you know about this?" he asked Woodward.

Oppel tried to defend his position by comparing himself to legendary Washington Post Publisher Katharine Graham. He said that she was ultimately in charge of both desks, but Bernstein was having none of it. "Now, you know there's a big difference between a publisher and an editor," he replied.

Oppel was then challenged by both Bernstein and Woodward when he said he thought confidential sources damaged journalism. The giants of the printed word, who, as reporters for The Washington Post, helped legitimize the practice by using leaks from Felt, said they were essential for good journalism. Recalling his 2002 Post story about early plans to invade Iraq, Woodward told Oppel, "I had six people who, if they had gone on the record, would have been fired or gone to prison. If you think they'd have gone on the record, you're wrong."

The Watergate papers are on public display in the Harry Ransom Center until Sunday, April 8. 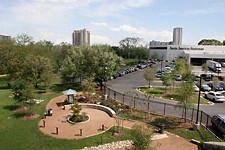 Media Watch: 'Statesman' Off the Market
After entering final negotiations to sell the paper, Cox Newspapers walks away from the table 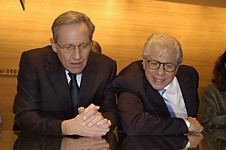 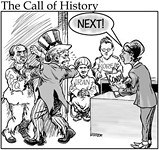