Constable, county at odds over timing and legality of funding cuts 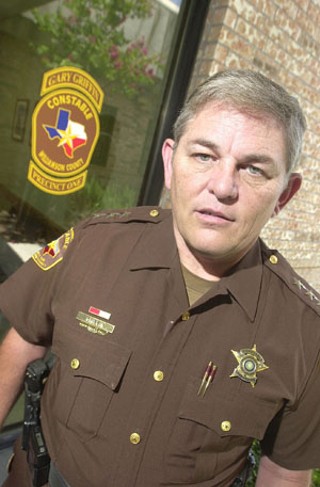 On Wednesday, March 21, former Travis Co. Judge Bill Aleshire and Williamson Co. Assistant Attorney Steve Ackley delivered oral arguments before the 3rd Court of Appeals in the matter of Griffin v. Birkman, et al. Filed in 2006 by Williamson Co. Precinct 1 Constable Gary Griffin, the lawsuit alleges that county commissioners violated the Texas Constitution by gutting Griffin's 2005 budget two months after adoption because they didn't agree with a deployment decision he had made. In district court last July, visiting Judge James Clawson granted the county's motion for summary judgment, and Griffin appealed. The county maintains the lawsuit is both moot and inconsequential. Aleshire and his co-counsel, former Texas Attorney General Jim Mattox, argue that the case could set a statewide precedent, either permitting or precluding commissioners from using purse strings to punish other elected officials any time they want. "It was an abuse of power," Mattox told the Chronicle.

On Oct. 19, 2005, Griffin temporarily redeployed his deputies from mental-health calls to warrants and civil papers, after Commissioner Lisa Birkman subjected him to months of protracted public pressure to do just that. He testified in district court that he even feared a removal suit over the issue. As it turned out, the redeployment lasted only a single day. Nevertheless, the next day, Oct. 20, Commissioners Court reacted punitively, enacting a curiously detailed and lengthy "emergency" budget cut, immediately transferring about $435,000 from Griffin's total budget to the sheriff's office. The money seeded a "crisis intervention team" – staffed mostly by Precinct 1 conscripts suddenly out of a job. Aleshire told the justices that this post-adoption budget cut had breached a constitutionally protected "sphere of authority" of elected officials. At its most basic level, the lawsuit argues that commissioners legally have just one chance each year to use the budget process to set county priorities.

The 3rd Court justices – Chief Justice Kenneth Law, David Puryear, and Diane Henson – had no questions for Ackley but plenty for Aleshire. Aleshire argued that Griffin had not created an emergency as accused and that even if he had, the law would not provide for an "emergency budget cut." Justice Puryear asked Aleshire whether Griffin's mental-health calls were, as the county is claiming, technically noncore duties and so subject to midyear transfers – as held by a Texas Supreme Court ruling on Titus County Commissioners v. Cynthia Agan, the county's centerpiece legal precedent. Aleshire answered that Griffin's deputy constables were responding to all calls, including mental health, as fully commissioned peace officers, always a core duty. Aleshire also contradicted the county's standing claim, repeated by Ackley, that Griffin operated a "mental-health unit," implying a distinct budget. "Instead, commissioners co-mingled money … then arbitrarily decided later to cut [this] budget by some number they made up at the time of the cut," Aleshire told the court.

Justice Henson asked whether Griffin had issued orders for his deputies to refuse all mental-health calls, citing a 911 transcript to that effect. "Sounds like a refusal to me," Henson said. Aleshire pointed out that Griffin was not the speaker in the 911 call and that his actual orders were to evaluate calls on a case-by-case, triage basis, as documented by a later transcript; moreover, Griffin had reinstated his earlier standing orders well before the budget meeting, missing not one mental-health call that day. Griffin's pleadings also cite district court testimony by former County Judge John Doerfler conceding that since Griffin was still handling mental-health calls, "There was not near as dire an emergency." Aleshire noted that the sheriff's office had been dispatching its deputies as primary responders to mental-health calls all along. "So, where was the 'grave public necessity' to cut Griffin's budget?" Aleshire asked. The county's emergency claim also cuts both ways; a compromise of public safety could arguably have occurred with the commissioners' budgetary purge of Precinct 1 constables.

Beginning with the argument, accepted by Judge Clawson, that the district court cannot interfere in county business, attorneys for Williamson Co. maintain that the county's budgetary actions are not subject to review by other government bodies. Ackley told the justices that the relevant case law "put two attorney general opinions in their place" and warned the court that if it ruled in Griffin's favor, "You will become the Commissioners Court." Ackley implied that Griffin's motives are essentially mercenary because the constable just wants "to get his hands on the $500,000" he lost in the budget cut. Aleshire rejected that charge, noting that the lawsuit does not seek monetary damages, and Griffin told the Chronicle he simply wants "the answer to my question" – whether elected officials work for the county commissioners or the people.

Via e-mail, Williamson Co. Attorney Jana Duty told the Chronicle she puts the county's odds of victory in the case at 90%. She wrote: "Mr. Aleshire and Mr. Ackley both did a tremendous job arguing the case, and I am confident that the Court will make the right decision." Responding to a Chronicle story on the case last week, Duty described as "ridiculous" Aleshire's claim that "a ruling in the County's favor would 'drastically change the law in Texas.'"

The case is anything but ridiculous to Aleshire. "Many people think of county government as an ugly baby with a strange look. But a county government in balance is a beautiful example of democracy, controlled by the people, not by the political Boss Hogs," Aleshire told the court. "This case strikes to the heart of that vision."

*Oops! The following correction ran in our April 6, 2007 issue: In last week's issue, a photo caption in "WilCo Budget War Goes to Appeals Court" mistakenly referred to Gary Griffin as a "former" Williamson County Constable. In fact, Griffin is still constable of Precinct 1. The Chronicle regrets the error.