Borris Miles decides he is the arbiter of taste and free speech at the Capitol. 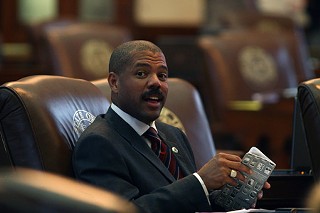 Rep. Borris Miles, D-Houston, was walking through the Capitol with his two young children when he saw two works of art in a public corridor he didn't like. He liked them so little that he took them down off the wall and hid them in his office. (Photo By Jana Birchum)

On March 12, freshman state Rep. Borris Miles, D-Houston, was walking through the Capitol with his two young children when he saw two works of art in a public corridor he didn't like. He liked them so little that he took them down off the wall and hid them in his office.

Now no one knows where they are.

Miles took down two paintings depicting executions because, he says, he found them offensive. Scott Cobb, president of the anti-death-penalty group Texas Moratorium Network, which organized the exhibition, condemned Miles' action. "Here we are in the seventh year of the 21st century," he said, "and people are still confiscating artwork for political reasons like it's 1955."

The two paintings were part of an exhibition intended to raise awareness of the death penalty in Texas. It contained 11 pieces, including three by artists on death row. They were exhibited March 12-17 – Texas Moratorium Week – in the main corridor on level E2 of the Capitol Extension (the bottom underground level). The artwork was selected from a larger touring exhibition, "Justice for All? Artists Reflect on the Death Penalty" (www.deathpenaltyartshow.org), which features pieces by 52 artists from the U.S., Germany, France, and the Netherlands and includes 13 works by inmates currently on death row in Texas. The full show was originally displayed at Gallery Lombardi in Austin in May of last year and in Houston's Gallery M2 in February. 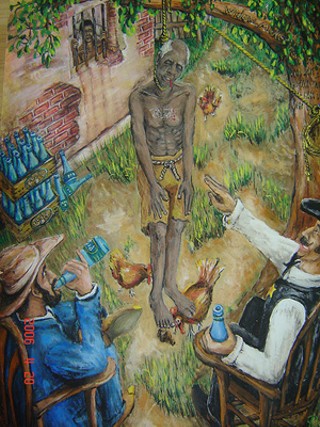 The Widow Maker by Reinaldo A. Dennes

The Widow Maker by Reinaldo A. Dennes (currently imprisoned in the Polunsky Unit in Livingston) shows two white men laughing and drinking at the feet of an old black man lynched from a tree. In the background, a second, chained black man looks despairingly out of a prison window. Cuban-born Dennes was found guilty of the 1996 murder of diamond merchant Janos Szucs and is awaiting execution. The second work, by professional artist Shanon Playford of Portland, Ore., is a monochrome watercolor showing a figure in an electric chair. The words "Doing God's Work" – also the title of the piece – are written underneath in script. Both pieces were on loan from the artists.

Miles says he does not regret his actions and claims that more than 50 representatives have told him, either in person or by e-mail, that they support him. Explaining his actions, Miles said, "As a black man, I was offended on the first one, and as a Christian on the second one."

Cobb said Miles had missed the point of exhibiting in the Capitol. It's a building "where we're supposed to discuss issues on an adult level," he said. "We shouldn't reduce the level of discourse in the Capitol [to] what's appropriate for a 5-year-old." And while Cobb disagreed with Miles about both pictures, he was most concerned about Miles taking down Doing God's Work. "That's a clear case of him stepping over the line," Cobb said. "No one has the right to take down artworks to extend their religious views."

Miles said that since he objected to the pictures, he was justified in simply stripping them from the exhibit on his own initiative. "There's obviously not enough oversight if those pictures made it to be seen in the Capitol," he said. "There needs to be some kind of system to see and screen what goes on display. Those were not appropriate." He had no suggestion as to who should make the decision of what is acceptable art, "as long as we don't have pictures in our hallways that could offend people of any race, creed, or color." 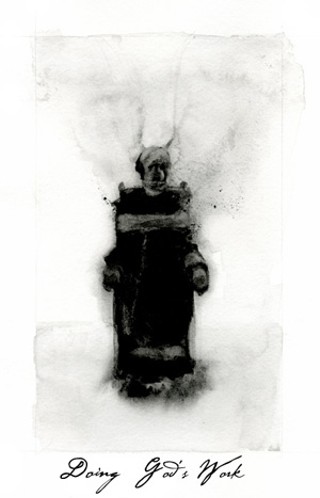 But there is an approval system in place, and the moratorium exhibition had in fact passed it. All exhibitions in the Capitol must be approved by the State Preservation Board, although board executive assistant Julie Fields said the application process is usually "just paperwork to keep track of what's coming into the building." Any exhibit must pass the basic test of being for a public purpose. "Basically," said Fields, "what we screen for is a private business trying to set up any kind of advertisement or promotion or any kind of rallies or political events that are prohibited in the building." She said that nothing like Miles' actions had happened before and that the current application and approval system had been sufficient so far. "There's no higher authority to ask for a review," she added, "and quite frankly, we've never had anyone who has ever done more than voiced a complaint."

Miles said that part of the problem was that the pictures were displayed with no explanatory note. However, the rules established by the Preservation Board for any exhibition in the Capitol states that they do not allow "activities which promote a certain viewpoint or issue or could be considered lobbying." Had the network included the kind of warning or labeling that Miles suggested, it might have violated this clause. Instead, the art was allowed to speak for itself.

Also under board rules, all exhibitions must be sponsored by either a member of the Legislature, the governor, or the lieutenant governor. In this case, the exhibition was sponsored by Miles' fellow Houston Democrat, Rep. Harold Dutton – a traditional foe of capital punishment, who has again filed bills this session proposing a moratorium or abolition. After several phone calls, Dutton's office declined to comment, only confirming that Dutton had never actually seen the pictures but had indeed signed off on the Moratorium Network's application for the exhibition.

Artist Playford was surprised at Miles' action and that he had found her piece sacrilegious. "If you were really a Christian," she said, "you'd see the hypocrisy of claiming execution is doing God's work."

Playford normally works in oils, but after the 2004 elections, she was drawn to make a series of politically satirical black-and-white watercolors called "Seeing Red." "To me," she said, they're slightly humorous. I don't think of my work as shocking. In fact, I've had some Christians e-mail me, and they were very supportive."

One of those Christians has now offered to buy Doing God's Work. That is, if the picture turns up. No one seems to know where either painting has gone. Miles said he gave the pieces to Dutton, and the Texas Moratorium Network said they thought they'd be able to collect them from his office. However, as of Wednesday, Dutton's office denied that they have the missing pictures.