Up from the muck at Concordia 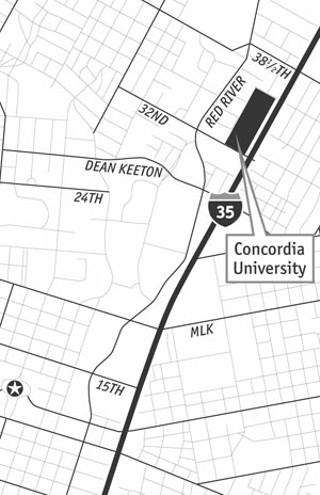 Instead of subsidizing Friday Night Lights, perhaps the city of Austin should underwrite a new reality TV show set in Austin, about high-stakes development deals – starting with a pilot based on this week's Concordia drama. The episode finally concluded late Monday afternoon, as the City Council signed off on a deal negotiated between an investment group seeking to redevelop Concordia University's 22-acre central campus and neighbors advocating for a better project.

No screenwriter could have scripted a more down-to-the-wire cliffhanger and colorful cast of characters than the melodrama surrounding this week's council vote on the campus rezoning. When final documents – capturing agreements among the city, the Hancock Neighborhood Association, and redeveloper East Avenue IG – weren't ready for a pressure-cooker council vote last Thursday night, the members had to return for a special session on Friday – only to be told that documents still weren't ready, amid much hand-wringing by the developer (represented by attorneys Andy Sarwal and Richard Suttle), Concordia University President Thomas Cedel, hard-pressed city staff (who put in long overtime hours), and exhausted citizens from surrounding neighborhoods pleading for enough time to plow through umpteen pages of legalese, after many, many months of difficult negotiations.

Up against a supposedly urgent deadline – with Suttle and Concordia rather implausibly claiming that waiting a few more days for council action would forever destroy the university's deal to acquire the former Schlumberger campus in North Austin and delay the start of its 2009 academic year – council had to post for emergency sessions on both Monday and Tuesday of this week. Council Members Mike Martinez and Brewster McCracken were most openly annoyed when Cedel claimed "confidential agreements" in declining to disclose what it might cost the university to buy a little extra time – especially given that Suttle was pressuring council to rush its vote in Concordia's interests.

"We're told we're pushed up against a deadline, and we can't get a straight answer!" objected Martinez.

"I feel we've all been put in a terrible situation," said HNA representative Shannon Ratliff Sr. He begged council, "Please don't visit us with a [flawed] law we have to live with, as long as I'm going to live."

Mayor (and former developer) Will Wynn expressed polite wonder that Concordia's Schlumberger deal wouldn't have included some bridge financing or extended closing provisions, as is customary for such major transactions. "The last thing we want to do is rush to a decision we'll regret," he emphasized. Resisting the developer's pressure at least slightly, Council bravely bought the neighborhood representatives another weekend (of hard work, for both them and city staff).

After the cliffhanger, the emergency motion passed calmly Monday on third reading, 5-0, with Jennifer Kim and Betty Dunkerley absent. While it seemed unlikely that anyone on the dais could know precisely what the documents said, if the parties were happy, council was happy. Prior to the vote, citizens beseeched council to create a better process for other projects, one that would exact less "blood, sweat, and tears" from ordinary, untutored citizens. "I'd really like to thank council for encouraging this collaborative process," said HNA President Bart Whatley, referring particularly to the inclusion of a developer-funded HNA attorney and urban planner ROMA Design Group in crafting the final agreement. "You need to be very proud of your city staff," said Suttle. For a feel-good ending, each major player gave a long "thank everyone" speech worthy of the Academy Awards.

The difficulties at Concordia mirror those of other recent controversies involving massive inner-city redevelopments using PUD (planned unit development) zoning – including the St. David's Hospital PUD and the Fairfield PUD adjacent to the Town Lake Hyatt. Related neighborhood battles have brought into high relief the flaws with PUDs. While PUDs are intended as a tool to create better projects on large tracts, in fact developers have been seeking PUD zoning to neatly avoid all restrictions on height and neighborhood compatibility, without doing superior urban planning. Among other problems, said HNA attorney Nikelle Meade, the city of Austin is interpreting PUD ordinance language as a limit on its powers to exact public benefits – such as affordable housing and parkland dedication – in exchange for granting "density bonuses" to a developer, as it would Downtown.

At Concordia, the city was conservative about the requirements it would write into city ordinance. Some are "in the PUD" and thus enforceable by the city. But for a number of matters in the public interest, the city could not – or would not – write the requirements into the PUD. This left the neighborhood association holding the bag; to get these concessions, it had to enter into a private restrictive covenant with developer East Avenue IG. Unfortunately, the city takes no responsibility to hold a developer's feet to the fire and ensure it abides by such private covenants. Should problems arise, it will be HNA and its private citizen members who must enforce the covenants – and pay for legal costs – to protect the public interest.

Said Meade: "We need to rework our PUD ordinance provisions to give council some creative ways to make these developments better and to get more affordability. We've got to figure out a mechanism to call this what it is – a density bonus. We need to rewrite the code, to make it clear that along with PUD zoning, council can ask for enhancements like affordable housing and green space and parkland dedication. Right now it's crazy – you've got private neighborhoods out there trying to accomplish the biggest things that the city really should be doing."

McCracken and Martinez have committed to work on a plan to create a better public process and change the land-development code for PUDs. McCracken emphasized on the dais that the city needs to shift its policy toward land-use planning for its long-term future, rather than just the next budget cycle. "We do need to go from an ad hoc way of making decisions on these issues to a policy," he asserted. He called for changes including a formal policy on density bonuses, stronger affordable housing provisions, and correcting PUDs as "the path of least resistance for doing the wrong thing."

Mysterious, then muddy and objectionable, then finally detailed and intelligent enough to create concord – such has been the progress of the Concordia site plan.

After many months of unproductive negotiations between the developer and the neighborhood, Council Members Brewster McCracken, Sheryl Cole, and Lee Leffingwell persuaded developer East Avenue IG to try another tack. The developer, to its credit: 1) paid for an attorney (Nikelle Meade) to represent the Hancock NA and level the playing field, and 2) paid for an urban designer (Jana McCann, of ROMA Design Group) to facilitate both sets of interests and craft a more detailed and well-thought-out plan for the enormous infill project. McCracken also encouraged the developer's attorneys to earn full neighborhood consensus rather than trying to push its desired zoning changes through council over the objections of unhappy neighbors.

Said attorney Richard Suttle of ROMA's involvement, "It brought a comfort level to the neighborhood side. Someone they could trust as a translator. … What Jana provided was the 'honest broker.'" – K.G. Mystery Map: What would the huge development inside the black box be like? No one really knew. The insufficient detail required by the city from a PUD developer is a weakness in Austin's PUD zoning. (Source: NPZD, city of Austin)

Muddy PUD: For the neighborhoods, this diagram from the project architect still left too many critical questions unanswered – such as whether tall new buildings could shoot up directly behind existing homes – and it showed too few roads. As a PUD, the project could ignore the usual restrictions on height and setbacks that ensure compatibility with existing neighborhoods – creating even greater distrust of the plan. (Source: Page Southerland Page) 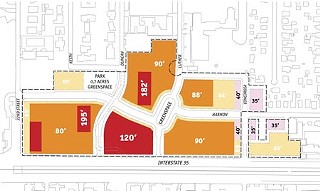 • The new street grid breaks down the scale of the blocks, provides better circulation, and connects up to neighborhood streets.

• Building heights step down sensitively, as they approach adjacent neighborhoods

• Tall towers are confined to three appropriate locations, away from homes.

Below are major public-interest terms of the deal struck with East Avenue IG for redeveloping the Concordia site. Items enacted "by city ordinance" are written into the PUD. Others were written into a private covenant with the Hancock Neighborhood Association. Altogether, the project is planned for 545,000 square feet of commercial space (office/retail), a 250-room upscale hotel, and 1,450 new homes. "Affordability is probably our biggest disappointment," said Meade. "Otherwise, we feel like we got a pretty good deal." Echoed HNA's Linda Guerrero at council, "The affordable housing is a sham and a shame." But overall, the final product – if not the process – provides a positive model for other public-benefit agreements for large-scale redevelopment, particularly under PUD zoning.

• GR (community commercial) as base zoning district; with extra entitlements, similar to DMU (Downtown mixed use)

• Design Standards Committee – to develop and put in place enhanced architectural standards for the entire project and for individual buildings. Members: Jana McCann, architect Brett Rhode, and attorney Andy Sarwal (for developer) (will be enforced by city once in place)

• Four 20,000-square-foot buildings for commercial use allowed; all others limited to 15,000 square feet or fewer

• Three towers allowed, one with hotel, with designated caps on footprints

The developer agreed to provide:

• One acre of public green space, on site

• $700,000 immediate contribution to Austin Parks Foundation for citywide parks improvements, plus $50,000 more if not paid within 60 days (in lieu of future parkland dedication fees, which could have totaled $942,000)

• Water-quality protections, built into sustainable site design, to include features such as rainwater harvesting