Burglars break into buidings under construction, leave digital photos of themselves behind 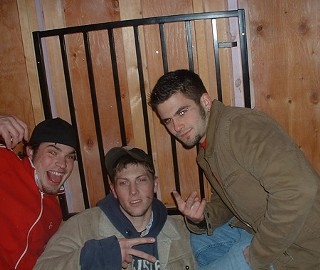 The Travis County Sheriff's Office is on the hunt for a group of, arguably, Austin's clumsiest (if not just completely incompetent) criminals: According to TCSO spokesman Roger Wade, on Feb. 1, burglars broke into several "structures" under construction at 7400 Coldwater Canyon and stole various items worth about $5,000 in all – and they might have gotten away with it (or had a better chance, at least) if they hadn't left behind a digital camera with several pictures on it. As it turns out, the structures were part of a new house being built by famed video-gamer Richard Garriott; the items taken included several expensive bottles of booze and catering equipment, and, thanks to someone's slippery fingers, the cops are now hot on the trail of a group of white college-aged suspects – several men and a woman – captured by the camera someone left behind, which contains shots of the suspects mugging for the camera inside the various structures and on the grounds of Garriott's property. (Our favorite, here, shows them tossing gang signs and flashing their best imitation of "tough." So scary.) The TCSO is asking anyone with information about the smiling suspects to call TCSO Detective Don Rios at 854-4813 or Crime Stoppers at 472-8477.