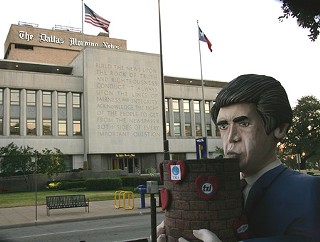 Although TXU announced last month that it would abandon plans for eight of its 11 proposed pul-verized-coal plants, "If TXU is truly committed to environmentally efficient technologies, it should consider replacing the proposed Oak Grove units with coal gasification and CO2 sequestration," says Tom "Smitty" Smith, who heads watchdog group Public Citizen's Texas office. The float pictured left is owned by DFW community group Downwinders at Risk. The smokestack Gov. Perry is smooching is adorned with the logos of various polluting industries, including Dallas-based TXU. (Photo By Walt Harrison)

TXU Corporation is now planning to build two coal-gasification or so-called "clean-coal" plants in Texas. The Dallas-based utility has gone topsy-turvy lately, announcing last month that it would abandon plans for eight of its 11 proposed controversial and technologically dated pulverized coal plants as part of an unprecedentedly large and still-uncertain buyout deal with two private equity firms. Under its pending new management, TXU announced an array of green reforms, including using more renewable energy and devoting more resources to energy efficiency – to the surprise of its many cautiously optimistic critics. Just as TXU's move to ditch most of its coal-plant plans seemed odd after more than a year of PR hysterics warning of energy crises if all of its plants weren't built, the company's clean-coal aspirations come as a shock as well, since the utility declared gasification technology commercially premature and incompatible with available coal supplies less than a month ago, echoing CEO John Wilder's inflammatory quote last year that gasification was a "gleam in someone's eye" – even though at least 25 other utilities nationwide are now pursuing such plants. And now that TXU has seen the clean-coal-fired light, its critics insist they apply the technology to their three remaining applications, which include the behemoth, Waco-area Oak Grove plant – actually two plants in one – anticipated to adversely impact Austin's air quality.

TXU plans to seek bids for two integrated gasification combined cycle coal plants, which are also said to be capable of capturing climate-changing carbon dioxide – a practice utilized in only one U.S. IGCC plant today, a North Dakota facility that pipes its CO2 into Canada where it's injected underground for enhanced oil recovery. IGCC with carbon-capture is the focus of much government and private research and is regarded by many greens as the only acceptable way to do coal. By first converting the coal to a gas, IGCC can separate out many pollutants before it's burned much like natural gas. "This project is further evidence of TXU's new commitment to move forward immediately to develop the next generation of low-cost, clean-burning technologies," said Mike Childers, CEO of TXU Generation Development.

One of the plants would be designed to burn lignite coal, an especially dirty variety native to Texas, and the other would use Power River Basin coal imported from Wyoming. TXU had previously said it could not secure "performance guarantees" on plants fueled by these types of coal and was unwilling to immediately consider them as a result. "The difference now, with the front end capital from the proposed transaction, is that we have the ability to do it sooner rather than later," TXU spokesman Tom Kleckner said. "IGCC will certainly have an important role in providing affordable, reliable power to meet Texas' future power needs." The proposed plants could be built at some of the sites previously slated for TXU's eight scrapped plants, said Kleckner, adding that the utility will "solicit statewide input on location options." The design, build, and permitting of the plans is expected to take six years, he said.

"Over the past year, we have held steady in our belief that IGCC holds the most promise for future coal use in Texas," said Environmental Defense regional director Jim Marston, who helped negotiate the eco reforms that accompanied the TXU buyout deal. He called the IGCC announcement another step in the right direction but one that directly contradicts the inaccurate claim that IGCC is not a feasible alternative here. Tom "Smitty" Smith, who heads watchdog group Public Citizen's Texas office, said the announcement is "a huge step for the climate; however, if TXU is truly committed to environmentally efficient technologies, it should consider replacing the proposed Oak Grove units with coal gasification and CO2 sequestration." Oak Grove, he argued, "will emit as much smog-forming gases as 350,000 cars, as much mercury as the eight plants TXU scrapped combined, and will threaten the air quality in the Dallas/Fort Worth area, Waco, and Austin." Austin Mayor Will Wynn has vowed to fight Oak Grove on behalf of Austin breathers as well.

TXU plans to continue with existing plans for Oak Grove, Kleckner said, explaining that "we think it's still needed to meet the near term energy needs of the state." Asked when Oak Grove would be operational, assuming no further delays, Kleckner replied late 2009 or early 2010. This is well after predicted energy-reserve-margin shortfalls in 2008 – oft noted by TXU – offering more credence to greens' belief that old-style plants like Oak Grove are the incorrect response to the state's growing energy needs.

As more solid data emerges to suggest that the immediate need to build polluting new power plants can be offset through energy-efficiency measures – successfully utilized in other states like California and now proposed widely by bipartisan state legislators here – it's now a matter of whether state leaders will respond to public opposition to dirty air with the foresight to demand cleaner energy sources – be it accelerated energy efficiency, expanded renewable energy, or, reluctantly, a coal-gasification facility like the U.S. Department of Energy's near-zero emissions, carbon-capturing, hydrogen-producing FutureGen project (www.fossil.energy.gov/programs/powersystems/futuregen).