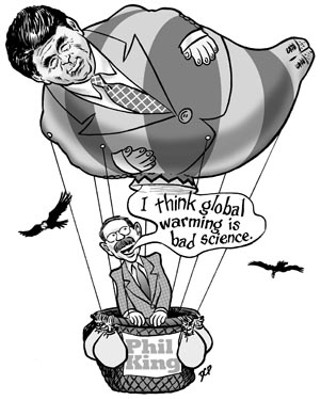 If nearly a dozen states can adopt tougher emissions standards for new cars and trucks, how hard can it be for Texas? It's as hard as can be.

Try convincing the governor and other Republican leaders that carbon-dioxide emissions from vehicles and coal plants contribute to global warming. To get to that point, they need to be sold on the scientific evidence that global warming does, in fact, exist.

Given those heady challenges, don't expect to see much movement this session on legislation containing the words "global warming" and "carbon dioxide" in the text. This would include the ambitious companion bills filed by Austin Rep. Mark Strama and Houston Sen. Rodney Ellis, which would add Texas to the growing number of states that have followed California's lead in enacting stricter emissions standards for new vehicles. The legislation would require dramatic reductions in sulfur dioxide and nitrous oxide – two pollutants that carry penalties under the federal Clean Air Act – as well as carbon dioxide, which is not addressed in the act.

As such, Texas legislators friendly with carbon dioxide-emitting industry are reluctant to implement new laws that exceed the federal level, as a raft of West Coast and northeast states have already done. "If the bill is going to pass, it would be on the basis of smog-forming pollutants" sulfur dioxide and nitrous oxide, Strama said. "Businesses support those reductions because the Clean Air Act can really punish industry and economic development if we fail to meet clean air standards." To the extent that there is traction in the bill, he added, "It's not because of global warming, unfortunately, because of what the political sentiments are about global warming."

Consider, for example, the sentiments of Rep. Phil King, R-Weatherford, chairman of the powerful House Committee on Regulated Industries: "I think global warming is bad science," he told the Fort Worth Star-Telegram in January. The same article quoted Gov. Rick Perry, who expressed doubt about the existence of man-made climate changes and fear that tighter standards would wreak havoc on the state's financial health. "I am not going to put the state of Texas in a competitive economic disadvantage on some science that may or may not be correct," he said.

With those views in mind, Strama said he'll file legislation by Friday – the deadline for filing bills – that even the governor might find favorable. The bill would amend current state law that provides property tax breaks for manufacturers that add upgraded pollution-control equipment to their facilities. Because carbon dioxide is not considered a pollutant in Texas, companies have little incentive to rein in their emissions. Strama's bill would change that. "We would give to carbon-capturing technologies the same exemption from property taxation that we give to other pollution controls," he said. As Strama sees it, the measure would encourage Texas industries to invest in these technologies while making the state a leader in the development of carbon-capturing technologies. A second component of the bill would give tax breaks to oil companies that prevent carbon dioxide – which is injected into oil wells to extract more oil – from escaping into the atmosphere.

Even with the governor's refusal to take the lead on stemming carbon-dioxide emissions, lawmakers have made great strides on another level – meaning they are able to discuss the pollution issue while tiptoeing around the subject of global warming. A bipartisan Legislative Air Quality Caucus has emerged this session, and that alone is progress. Lest they set off any polarizing alarm bells, the caucus members have taken a middle-of-the-road approach toward protecting public health without stiffing Texas businesses.

Rep. Donna Howard, D-Austin, took the lead organizing the group, with help from the other side of the aisle. "The first person I went to was Jerry Madden," Howard said of the senior House member from Richardson. Madden is one of the more outspoken Republicans questioning the wisdom of fast-tracking the permitting process for a number of proposed coal-fired power plants. "I felt that if Jerry got on board, he would lend credibility to the effort and show that this was sincerely going to be a bipartisan effort," she said. Working together, the two had little trouble recruiting members from both parties. "We have 41 members signed up, and close to a third of them are Republicans," Howard said proudly.

The group has already achieved a consensus on one critical issue – a lack of communication between the Texas Commission on Environmental Quality, the Public Utility Commission, and the Electric Reliability Council of Texas, which operates the electric grid for about 85% of the state. "They're making decisions independent of one another, with the right hand not necessarily knowing what the left hand is doing," Howard said. The caucus landed on the poor communication link at a meeting with representatives of the three agencies. "In talking with us about what their perceptions are [of the state's energy picture] and where we are headed, it was clear that there was some confusion and misinformation and assumptions being made by different parts of that triumvirate." This was all the evidence legislators needed to build momentum for developing a statewide energy policy, maybe even an umbrella organization that would address the state's appetite for power. This step forward won't solve global warming, but it could be just the ticket for the right hand knowing what the left hand is doing. That's progress.

For more on global warming issues, see "How Cool Is Austin?"