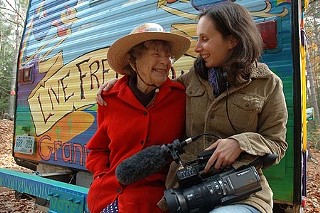 Long before Carole Keeton Strayhorn proclaimed herself "One Tough Grandma," Doris "Granny D" Haddock captured the nation's attention in 1999 when she walked 3,200 miles from California to Washington, D.C., to support campaign finance reform. Granny D will make her big-screen debut next week at SXSW in the documentary Run Granny Run, which chronicles her 2004 bid for the New Hampshire seat in U.S. Senate against popular incumbent Republican Judd Gregg. Granny D will appear in person along with the film's director, Marlo Poras, whose first documentary, Mai's America, won the Audience Award for Best Documentary at SXSW in 2002.

Poras, who first took notice of Granny D after her campaign finance reform crusade, originally planned to shoot a documentary of Haddock's 2004 voter-registration drive. "I was so touched that this 94-year-old was putting her life on the line for her vision of democracy that I just wanted to meet her," Poras said. Things changed when Burt Cohen, the Democratic candidate in the New Hampshire Senate race, unexpectedly quit after his campaign manager disappeared along with his campaign funds. The announcement caused panic among the ranks of Democrats, who had only 24 hours to find a replacement.

With the filing deadline bearing down on them, Democratic leaders were more than happy when Granny D offered to take Cohen's place on the ballot. Up against what seemed like impossible odds – Gregg, one of the most popular senators in the nation and close friend of President George W. Bush, was running for his third term – Haddock ran a characteristically grassroots campaign. She turned down all political action committee money offered and launched a virtually no-budget campaign, shunning manufactured signs for ones handmade by supporters. "Can a candidate win without taking a dollar from special interests?" she asked a small gathering at the University of New Hampshire. "Watch me."

The campaign received the full support of the Democratic Party, which offered the help of some of its finest strategists, including Joe Trippi, campaign manager for presidential candidate Howard Dean. Granny D's campaign, though unsuccessful, was seen as crucial in winning New Hampshire – considered a swing state – for the Democrats in the presidential elections. Haddock used the campaign as a means to blast Republicans on issues ranging from health care to campaign finance reform to the Iraq war.

The climax of Haddock's campaign, as portrayed in the film, was her televised debate with Gregg. The debate was a great challenge for Granny D, who was accustomed to giving pre-prepared speeches and had trouble hearing, said Dennis Burke, a close friend of hers who worked on her campaign. Her opponent, who played the role of John Kerry in Bush's mock debate, was considered an expert debater. Though supporters were nervous about how Haddock would perform, she exceeded expectations. Burke recalls one moment when she called Gregg out on the environment, pointing to the high levels of mercury in New Hampshire fish. "Would you eat a fish you caught here?" she asked.

Burke said Granny D's political legacy is important because she makes people feel empowered. "She teaches us that we all have these superpowers. All she has to do is walk and speak the truth. And in our society that's a superpower," he said.