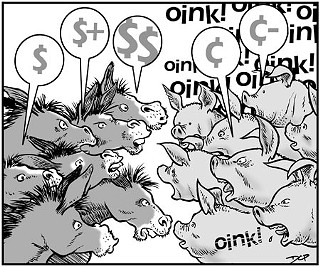 Why haven't competing versions of U.S. House and Senate minimum-wage legislation made it yet to conference committee for debate and, ideally, subsequent compromise?

As Economic Policy Institute economist Max B. Sawicky puts it more eloquently in a recent op-ed, the tax cuts for small businesses that Senate Republicans insist be included in any wage-hike legislation are nothing more than Congress' version of the other white meat. (The EPI is a D.C.-based think tank that focuses primarily on labor issues.)

"Everybody in Washington knows these tax cuts are just pork, no less than past earmarks for such boondoggles as Ohio's National Packard Museum or Alabama's statue of Vulcan, the Roman god of fire. … [T]hese tax cuts would never stand alone, so they ought not stand at all."

As Sawicky explains in "Minimum Wage, Maximum Pork," which originally appeared in Business Week, the problem with the proposed tax cuts is that they "could benefit a business with no minimum-wage employees – or one with no employees at all – because they're unrelated to labor costs, past, present or future." Instead, the cuts are tied largely to a business' depreciation and how a business is classified by the Internal Revenue Service.

The House and Senate have both passed bills to raise the federal minimum wage from $5.15 to $7.25 an hour, the first increase in more than nine years. The rub is that the Senate's version includes $8.3 billion in tax breaks. While the House's initial version of the bill didn't include breaks for businesses, a revised version passed Feb. 16 includes $1.8 billion. The Associated Press reported in mid-February that "Senate Finance Committee Chairman Max Baucus, D-Mont., said House and Senate negotiators could reconcile differences in the bills within two or three weeks," quoting Baucus as saying, "The minimum wage provision is going to trump all of this and is going to drive us to get this thing done pretty quickly."

Well, about three weeks have passed, and what has Congress accomplished on the minimum-wage front? Nada.

Ross Eisenbrey, EPI's vice president and policy director, told the Chronicle in an e-mail, "The Republicans are stalling, refusing to give unanimous consent to go to conference until the Dems agree to a high level of business tax cuts. The Dems are refusing, and [Senate Majority Leader Harry] Reid is reported to be at the end of his fuse."

At the state level, Houston Democrats Rodney Ellis and Senfronia Thompson have filed identical companion bills – Senate Bill 95 and House Bill 451, respectively – that include a provision for adjusting the minimum wage for inflation to prevent its value from eroding. (For more on this, see "Hope on Minimum-Wage Horizon," Feb. 2.) But nothing has happened with SB 95 so far, and Economic Development Committee members left HB 451 pending after a Feb. 21 public hearing.

Stalling and waiting aside, watchers at both the state and federal level are still hopeful minimum-wage legislation will pass. "I am confident that the minimum-wage bill will make it to the president's desk," Eisenbrey said.

When asked about the chances of minimum-wage legislation passing in Texas, the Center for Public Policy Priorities' Don Baylor said, "There does seem to be a consensus that it would be OK for Texas to act at this time." Translation: Twenty-nine states have already approved minimum-wage increases, 10 of which are adjusted for inflation, so nobody would have the gall to call Texas legislators sissy, worker-friendly progressives if they raise the minimum wage this session.

"It just becomes harder and harder to argue that it's a job-killer," said Baylor of raising the minimum. The issue has "moved from semifringe to fully mainstream at this point." The most contentious aspect of Ellis' and Thompson's legislation will be the issue of whether to adjust for inflation, said Baylor, adding that the pace at which the bills move under the state's pink dome is tied directly to happenings, or lack thereof, in Congress. "The federal stuff is obviously moving along very slowly," he said, "and that obviously has a big impact on what happens here." 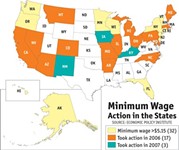 Hope on Minimum-Wage Horizon
Serious state and federal efforts under way to pass legislation that would raise minimum wage, stuck more than nine years at a pathetic $5.15 an hour