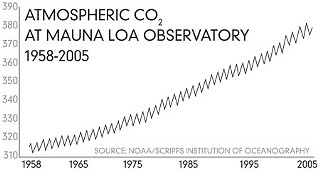 This chart (sometimes called the "Mauna Loa Curve") shows the oscillating annual increase in "anthropogenic" (man-made) atmospheric CO2 concentration since the mid-1950s, as measured by the U.S. atmospheric observatory at Mauna Loa, Hawaii. The annual variation corresponds to changes in vegetation, primarily in the northern hemisphere. The preindustrial concentration of CO2 was 289 parts per million; in 2005, the atmospheric level above Mauna Loa was 381 parts per million.

Reversing global warming centrally depends on gradually eliminating large sources of CO2 emissions – such as the 11 pulverized coal plants currently proposed in Texas, by TXU Energy and other utilities. Although TXU's recent deletion of eight of its 11 planned plants is a welcome reprieve, the pending new owners plan to pursue three of the company's worst projects – both in terms of overall pollution and direct effects on Austin's air quality – and they're joined by seven other utilities proposing eight more pulverized coal plants.

What will that mean to Austin? Each year, the 11 coal plants would dump into the atmosphere an estimated 60 million tons of CO2, the most common greenhouse gas, boosting Texas' currently nation-leading emissions of about 246 million tons per year from power plants (765 MTY in all) by 25%. Today, Austin Energy is seen as a national beacon for the use of renewable energy and energy conservation. From efforts in those two areas – including GreenChoice, the nation's largest renewable-energy subscription program and a slew of efficiency incentive programs for customers – the utility estimates it can avoid releasing some 445,000 million tons of CO2 per year. Austin is set to embark on its ambitious Climate Protection Plan – which would certainly boost that figure significantly – but it would have an uphill battle to even break even with the new plants' added CO2 pollution. So while the same groups of dirty-coal dissidents that opposed TXU's previous coal plans are gearing up to battle the remaining plants, the city of Austin is setting its sights on its most imposing threat: TXU's massive Oak Grove plant, near Waco.

TXU's Sandow 5 plant near Rockdale – permitted two years ago and cleared for construction last week by a federal judge following lengthy litigation – is actually closer to Austin than Oak Grove, but emissions modeling has shown that Oak Grove's pollution blows more directly into Austin. Moreover, Oak Grove is really two plants in one, each larger than any other single unit proposed statewide – and Oak Grove will burn Texas lignite coal, one of the dirtiest varieties known. In virtually all pollution categories (including CO2, smog, ozone, and mercury) estimated emissions for Oak Grove double that of every other proposed plant. Austin Mayor Will Wynn lauded TXU's initial coal reversal but said the company's decision to pursue Oak Grove "could still leave Austin in a vulnerable position and threaten to undo all our hard work under the Early Action Compact," an agreement Austin and five surrounding counties struck with the EPA and the Texas Commission on Environmental Quality to forestall violations of the Clean Air Act (which carry costly penalties). Local governments and citizens have already spent millions implementing the Early Action Plan – which includes mandatory vehicle emissions testing – and have seen measurable improvements in ozone pollution. But Wynn said "air quality modeling on the Oak Grove plant indicates that its emissions could push us over the line into nonattainment [of Clean Air Act compliance]. I'm hopeful that the TXU buyout will go through and the new leadership will address our concerns. If that doesn't happen, though, I'm going to continue to fight against the permitting of that plant."

Though Oak Grove is one TCEQ vote from final approval, it's by no means a done deal. Last August, state administrative judges issued a decision recommending that the TCEQ deny Oak Grove's permit based on doubts over the adequacy of its pollution controls. A federal lawsuit filed last December against TXU on similar grounds remains pending. Coal-cheerleading Gov. Rick Perry recently nominated Assistant Secretary of State Buddy Garcia to a long-vacant post on the TCEQ, and once that appointment is approved by the Senate, the three-member body will vote on Oak Grove's permit. Few would be astonished if commissioners bucked the administrative judges' recommended denial and approved Oak Grove.

Permit battles aside, one certain lesson can be learned from this coal-fired saga: Don't believe the hype. Throughout the feverish PR blitz pushing its 11 plants, TXU insisted that Texas would go dark or worse if all the proposed plants weren't quickly built. "Every day a solution is delayed leaves older, less efficient power plants online, affecting prices and clean air and bringing us one day closer to widespread, rolling blackouts," a TXU spokesperson declared two weeks ago – before the prospective new owners changed the tune. State Sen. Rodney Ellis responded, "Clearly TXU has been exaggerating the need for these plants, and I think the speed with which they abandoned the project speaks volumes." Ellis recently filed SB 860, which calls for a two-year moratorium on coal-power-plant permitting as well as for an "integrated energy plan that provides for this state's electricity generation needs [and] protects the health and safety of the residents of this state."

Other legislators have filed bills that would address the need for new power plants altogether: requiring the state to be more energy efficient, mandating efficiency standards for appliances, tightening building codes, reducing energy use at public agency facilities, and requiring utilities to offset new consumer demand with incentive-based efficiency measures.

In a phone interview from the Capitol, Tom "Smitty" Smith, director of watchdog group Public Citizen's Texas office, said of TXU, "There's no good reason why we're not looking at CO2 in our [power plant] permitting process, and we're attempting to change Texas law to see it happen." He called the utility's pledge to drop eight coal plants and join the U.S. Climate Action Partnership a major national victory, noting that TXU has now joined every other major utility in Texas in believing that global warming is happening and either working on [carbon-capping] legislation or looking at reforms in their planing matrix. He said the city of San Antonio, which has already started building its own new pulverized coal plant, has vowed to buy enough renewable energy to offset its plants' emissions. Speaking to a broader sea change in national climate change awareness, he said global warming reforms will be a huge issue in every upcoming political race from Texas metro mayoral elections, to 2008's Texas congressional elections, to the race for the White House, noting that even the prominent GOP candidates have strong global warming stances. Whether any current politicos here in Texas will take a direct stand against CO2 before any more new coal plants break ground remains to be seen.